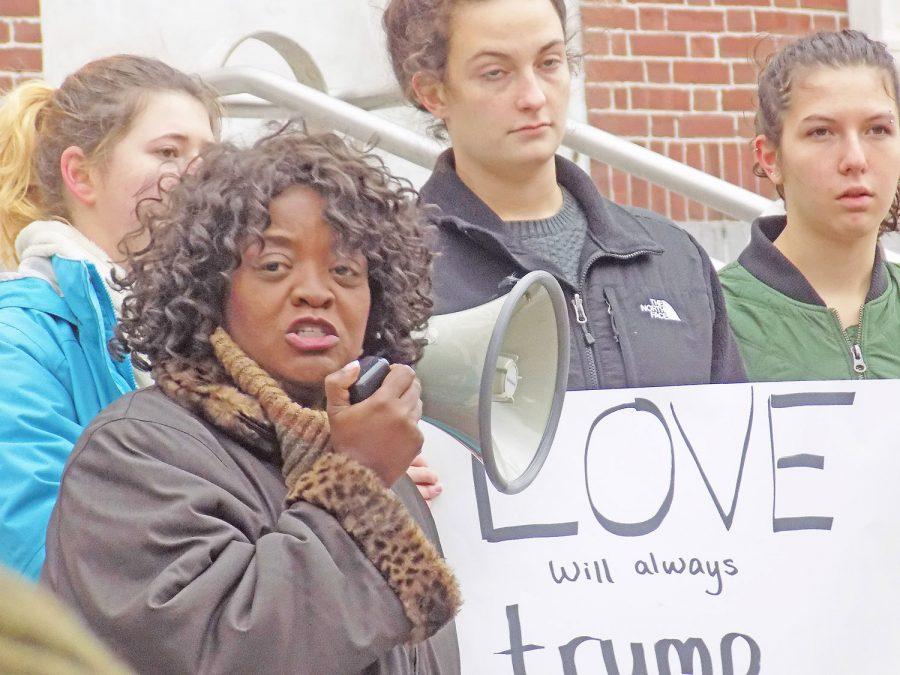 “If you are neutral in situations of injustice, you have chosen the side of the oppressor,” one protester attending UVM said through her megaphone, quoting South African social rights activist Desmond Tutu.

The protester, a self-proclaimed proud Jewish woman, stood before a group of 200 colorful protestors on a dreary Veteran’s Day afternoon in defiance of President-elect Donald Trump and his vice president-elect, Mike Pence.

Because Trump faces allegations of sexual assault from multiple women and Pence stands responsible for signing Indiana’s Religious Freedom Restoration Act into law — a law some fear could open doors for discrimination against the LGBTQ+ community — many of my friends and peers feel threatened and fearful.

I voiced my opposition that afternoon not for myself, a white, cisgender male, but my friends and those in my family who are already faced with discrimination for being a minority, a woman or both.

Among the protestors, students from UVM and other Vermont colleges, Burlington residents and city officials, and current and former Vermont legislators showed up to promote democracy and unity across party lines, gender, sexual orientation, race and religious affiliation.

“Since we’re a small state, if you try to do anything, you’ll discover that we have access to members of congress,” she added, “we have access to our legislators, and we have extraordinary access to all of these decision-makers. So speak up and learn how the process works.”

Since he was declared president-elect, people within this country have protested Trump’s victory everywhere from New York City to Portland, Oregon. Protesters have amassed to preserve the progress made over the last near-decade under the Obama Administration.

We were there to protect and make progress on the fundamental human rights of the LBGTQ+ community, healing the scars inflicted by a rash of culturally-embedded racism in our society and criminal justice system, and protect the rights of women for an equitable and socially prosperous future.

Colorful signs were brandished in the drab fall afternoon with phrases such as “Rainbow Pussy Power” and “Pussies Grab Back.” One sign held by a young white protester highlighted two statistics key to Trump’s victory: 63 percent of white men and 53 percent of white women filled in the Trump-Pence circle on election day. A New York Times article written by Katie Rogers the day after election day corroborated the statistics on the young woman’s sign. Near the bottom of the cardboard display, she posed the question: “How will we fix this?”

A feeling of anger and anxiety over Trump’s election warmed the chilling fall air as Mary Brown-Guillory, president of the Champlain Area National Association for the Advancement of Colored People (NAACP), energized the gathering of protesters, adults, teens and children alike, with the directive to get out and make a difference.

“But let me tell you, the last election we had, I was challenged in Burlington, Vermont, with my right to vote,” she continued. “So don’t think that racism is somewhere else — it’s right here. But when I go to NAACP meetings and look around the table, I don’t see all of you. I know you care, I know you care. But be so energized to care when you’re tired, and be so energized to care when you don’t feel like going to a meeting or protest to voice your opinion. Be so moved to care to know that 50 percent of our population stayed home on Tuesday. Because when you stay home, this is what happens.”

Fifteen-year-old Thabitha Moruthane, who skipped her honors U.S. history class at South Burlington High School to attend the protest, exhorted her audience to not view racism as a hindrance to anyone’s life, but an obstacle they can triumph over.

“Being a woman of color and growing up with my dad — he’s South African — growing up with him having an accent and experiencing racism,” Moruthane said, “if I never experienced racism, I wouldn’t be the person I am today. Throughout this, at the end of this, we’ll be stronger.”

As I scanned the crowd’s reactions, I saw the steely conviction of hundreds of citizens like Moruthane and Brown-Guillory. I saw unity rather than race, cultured opinions rather than gender, and experiences that were far from my own as a white male.

Despite the outrage, the theme for the afternoon was love and unity, not outright hatred. Many rally-goers embodied several of the minority groups Trump personally insulted and flip-flopped on with his unapologetic campaign rhetoric.

Caped with a body-length rainbow U.S. flag, Jan-Luis Maldonado, who arrived in Vermont from Puerto Rico four years ago, said that despite the results of the election, he enjoys the acceptance and celebration of his new abode.

“Back home, we couldn’t do this,” said Maldonado. “If you were queer in any sort of vein, you just had to keep your mouth shut. The closest thing I got was some awkward dances with 40-year-olds in nightclubs. That’s as close as I got to being prideful about who I was. But I’ve never felt more comfortable than here.

“As a queer Latino, I’m scared and angry like most of you are,” he added. “And one thing we need to focus on right now is not only being safe, but keeping each other safe.”

Maldonado later distributed safety pins signifying a safe space from discrimination from his 90-pack, which he bought at Rite Aid while running late for the rally he would speak at.

“This is what America is,” Maldonado continued. “We’re a melting pot of people. We care about each other and unite in our differences.”

For hours, the vibrant crowd replaced the depression of a frustrating election season with an outpouring of emotion and occasional f-bombs. The love, vitriol and anxieties of the protestors streamlined into a formal march onto Church Street where shoppers and locals either clapped with approval or folded their arms and observed expressionlessly.

Shouts of “Not my president!” rang through the Church Street marketplace as the remaining beams of sunlight waned between the buildings. Onward we marched and shouted hoarsely as a single democratic entity for love and unity. This is what democracy looks like.