Getting high on mountain life 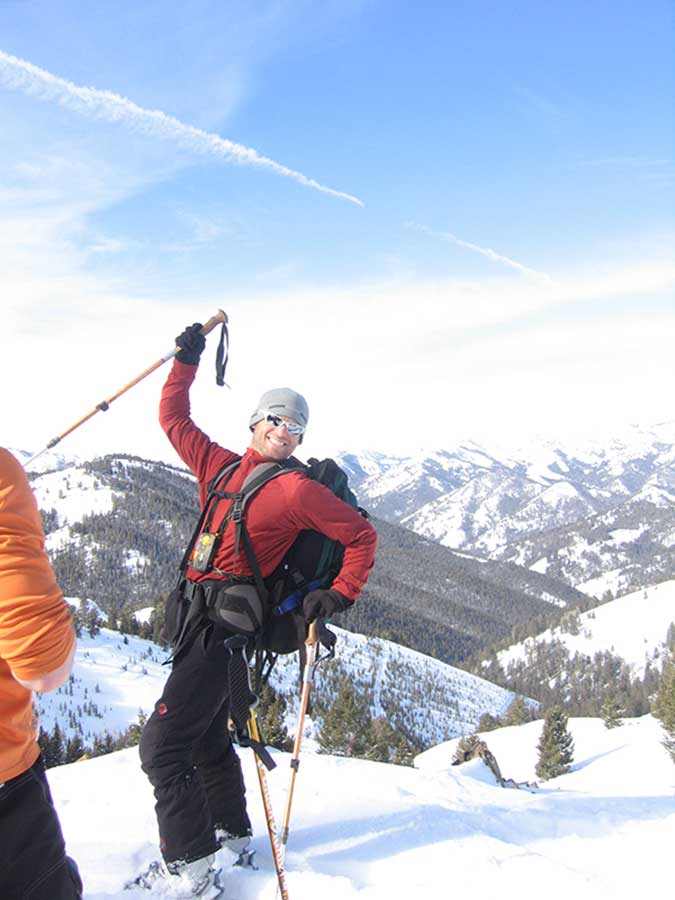 Brad Moskowitz is a professor of outdoor education at JSC who finds peace and empowerment in the world’s natural beauty and environmental. And even though he admits he’s a westerner at heart, he says Vermont’s natural and social communities have won him over. Basement Medicine recently sat down with the avid skier, rock climber and mountaineer for an interview.

What is your favorite outdoor education activity to teach?
I like a lot of them. I love teaching climbing, I love teaching skiing and just getting students stoked and out into the field enjoying and participating in some sports that people can do for their entire lifetime. That’s pretty fun for me. I also do a wilderness leadership class where we do a lot of classroom stuff, but then we go out into the field for two-to-three weeks and we typically do an extended trip to the desert southwest of the United States. We hit some of canyon country and hit some real spiritual places; I think students come back from that experience really, in some cases, transformed.

Desert training?
Yeah, we go into Utah to canyon country and we do some canyon backpacking and some technical slot canyoneering, propelling into canyons, swimming through cold water and we also do some climbing while we’re out there. Sometimes we incorporate some mountain biking or some whitewater guiding skills. It just depends on where the students’ interests lie.

What’s the strangest food you’ve ever eaten?
Let’s see, I’ve tasted termites and I’ve had fried beetles before. Also, when I was in Peru on sabbatical one year, I ate some cui, which is guinea pig. It’s a delicacy in Peru. A lot people keep guinea pigs in their homes and in their yards, but on special occasions like weddings and parties and things like that they stick them on the grill or they sauté them.

What’s your guilty pleasure?
I do like a fine craft beer on occasion. I’ve had 14th Star [beer]; I’m also Russian — you know, Moskowitz is a Polish-Russian name — so I do like a good vodka martini. There’s some good local stuff.

Tell me your fondest memory of hiking a mountain. Where was it? What happened?
Most recently, in 2015 I was on sabbatical and I spent some time in Ecuador. I climbed Chimborazo, which is the highest peak in Ecuador. It was a pretty significant ordeal, hiking Chimborazo. It wasn’t technically that challenging in terms of the climbing, but the altitude and the pace that we were going at – I was with some very strong climbers. We made it to the top of Chimborazo and I was definitely hypothermic and pretty exhausted at the time, but it was one of the most amazing sunrises. Then, hiking down the mountain with the sun rising and seeing the shadow cast upon the landscape that surrounded it was pretty unbelievable. It’s one of the more prominent mountains in the world; it’s 20,564 feet with a 13,524-foot prominence. Compared to the landscape around it, that’s how high it rises above the earth.

What made you want to do this type of work?
Since I was a kid, I didn’t really participate in a ton of team sports. I played some soccer for a while and a little bit of lacrosse, but I was always a passionate skier. It was something our family did on vacations and on weekends and such. I just loved being outdoors and exploring and adventuring and pretending I was a mountaineer or a climber. As I got older and went to college in Colorado — I went to the University of Denver as an undergraduate — I started mountain biking back in the 80s and it was something that was really just a great combination of thrill, being outdoors, breathing the fresh air and getting high on mountain life. I really enjoyed it and started leading other people through those experiences with the University of Denver Alpine Club. Through there, I was taking people hiking and backpacking and I just love being in the mountains. That’s my big passion and there’s no place I’d rather be.

Name four or five celebrities, dead or alive, that you’d most like have dinner with.
I’d be interested in having dinner with Yvon Chouinard from Patagonia and Black Diamond Equipment, [which was] Chouinard Equipment back in the day. He’s still a very active CEO [chief executive officer] of a company that’s really making headway with helping to organize people toward positive social change as it relates to our environment and policies and decisions that are made around land in the United States and around the world about how we need to care for it, preserve it and so on. He also has a rich history in rock climbing and mountaineering. He’d be a pretty cool person to talk to and pick his brain. If he were still among us, Willi Unsoeld was one of America’s greatest climbers, mountaineers and educators. He was a professor of philosophy at Evergreen State College [Olympia, Washington]. He was one of the first two Americans to ever summit Mount Everest. They did it via a route that had never been climbed before; they did it point-to-point, meaning they started on one side of the mountain, climbed an unclimbed route to the summit and then came down the other side. So it was a pretty bold feat in the day. He was a very passionate educator and spokesperson for the value of wilderness experiences and how we can find our spirituality in the wilderness. He would be somebody I would love to hang out with for a little bit and chew the cud, so to speak and see what he would have to say about where we are now with outdoor and adventure activities. Kurt Hahn is another educator that’s often referenced as the father of adventure education. I think it’d be pretty cool to talk to him and catch his insight into the similar things I just mentioned. And I’d like to know what Jimi Hendrix thinks about rock and roll, the progression of music and guitar and how things have changed since the revolution that he helped create.

Where is your favorite place to travel to?
I definitely love the desert-southwest, I go there every year. Any place that has strikingly beautiful natural topography. Certainly, I love South America. I’ve really enjoyed the Andes, it’s a beautiful mountain range. I’ve never been to the Alps, so I have hopes to go there in the relatively near future; the Swiss Alps, the French Alps or the Italian Alps. I’d love to someday visit the Himalaya and wander around those hills.

What songs or artists have been on your playlist most recently?
I have been listening to The Lumineers quite a bit. My wife really enjoys them. My kids listen to a lot of hip-hop and rap, so I listen to some of that, like A$AP Rocky. But I am not an aficionado of that type of music.

After a hard day, what is your method of rewinding?
I definitely need to get exercise frequently, so I tend to hike or jog up mountains . . . or carve single-track on my bicycle or ski in the winter time; skate skiing or back country skiing is my preferred way to do that. And then I finish it off with a cold IPA.

What advice would you give to aspiring outdoor educators?
Number one is that you need to go out and gain as much experience as you can. That experience involves staying fit and being on the cross-country team and going out when you have time to do the things you love to do that might relate to your future skill set that you might be teaching. You need to gain personal experience climbing, backpacking, gallivanting in the mountains and paddling in the rivers before you can be entrusted with guiding and protecting others in those environments. Really, it’s just taking all of your life skills and pulling them together and keeping track of your activities and adventures in a systematic way so you can help explain to others both your skills with others and to also quantify your experience… Take advantage of opportunities to go to conferences and to interact with people from other institutions that similar interests and get a job in the field.

What do you want to be your legacy to be?
I think I would like people to remember me for my energy and enthusiasm and my ability to inspire others.

How about an interesting fact about yourself that your students don’t know about?
When I was 13, I had a mohawk that was dyed white. I went through phases including break dancing in the streets of Boston, Massachusetts to going to punk rock shows and slam dancing in the early 80s.

Whom do you admire most?
A guy by the name of Rick Medrick, who worked with me when I was getting my master’s degree from Prescott College [Arizona]. He was very, very good at what he did, which was inspire me to think deeper about myself and my studies, about what I wanted to gain through seeking a master’s degree and what my future could unfold to be. I think through his tutelage, I’ve been able to make some good progress.

As an outdoor educator what are your thoughts on some of the National Monuments that are under examination by the Trump Administration?
I’m a strong proponent of the national monuments and I think that a reevaluation in some cases is uncalled for. In some cases, maybe some things could be looked at, but I think the potential and the rationale for why this has been undertaken through our current administration is pretty asinine. I think that it’s shortsighted and I think it’s mainly due to the interest of people who want to develop these areas for economic and financial gain for individuals rather than for the public. These are public lands that I think we as citizens of the United States need to have a say in. Granted, I think it’s important to hear both sides of the story and I think that talking to people – locals in some of these areas – is really important… As a people, we need to determine what the value is of our natural lands. Whether it’s a strikingly beautiful natural arch or whether it’s just open landscape that some people don’t see as having value.