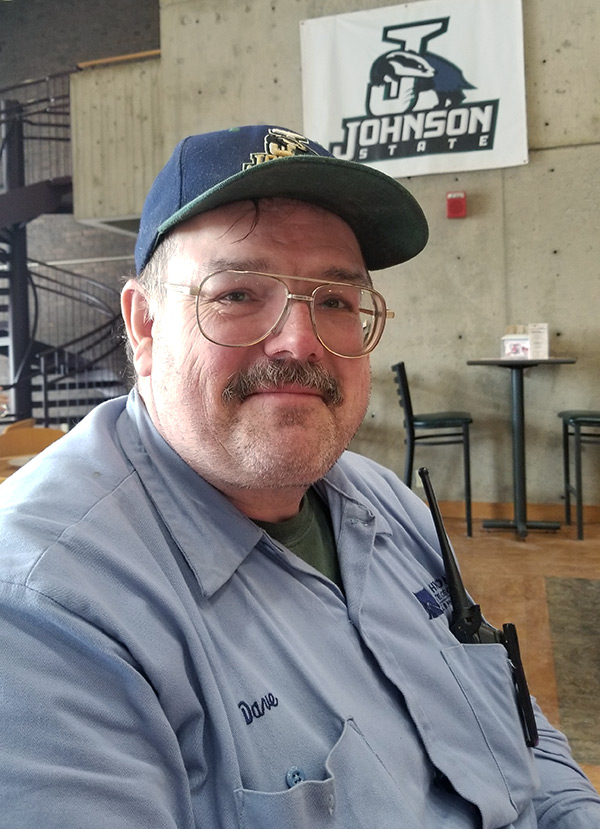 David Coolbeth walked into the Stearns dining hall with the same sense of routine a construction worker would, getting ready to open his brown paper bag and eat the sandwich his wife had made him that morning.

In fact, he could very well be the living stereotype of a 70s family man. Worn like a uniform is a baby blue collared button-up with his first name embroidered into the right breast. He’s tall, perhaps close to six feet in height, accompanied by a jolly round belly. His work boots, weathered by dirt and travel and stained by salt and ice, shuffled carefully across the floor, so as not to make much noise.

He had a square jawline, with large cheeks framed by a strong salt-and-pepper mustache, contained by prominent smile lines. His eyebrows — two wispy, straight lines — tilted upwards slightly, as if he was a little concerned. His aviator bifocals sat squarely upon his thin, curved nose, the only obstruction from his small, warm eyes. He wore his blue and green JSC Badgers ball cap religiously, perhaps to cover a thinning hair line. While he was larger, he seemed to take up as little space as possible, self-contained in folded arms and lowered shoulders. Despite his great popularity, he came off as bashful and shy.

When contacted for an interview, it came as quite a surprise to him. “I’m not much interesting, but alright,” he said.

Coolbeth has been working for the Maintenance Department at Johnson State College since 2007. “I can tell you I started Jan. 22, 2007,” Coolbeth said. “It was two weeks after we had dissolved our business in Barre, and I was looking for a job and I heard about this up here. I’m glad I got the job.”

One of the deciding factors in taking up the job was the tuition benefits for his children. Fast forward 11 years, and he’s putting his youngest daughter through college at JSC.

There are many like Coolbeth in the Maintenance Department who are not often recognized for their dedication to the campus.

Because of his work ethic, positive attitude and contagious smile, Coolbeth has become a favorite amongst faculty and students. While he sat in the Stearns dining hall, students, faculty and others waved to him, smiled at him and joked with him as they went to sit down for lunch.

Coolbeth worked in a variety of fields before coming to Johnson. “Out of high school, I moved to Pennsylvania, lived down there for a year. I worked in a potato chip factory, loading trucks,” Coolbeth said, and smiled wide. “That was probably one of the funnest jobs I’d ever had. It was fun to be around the people I was around . . . Really nice people. Then my father asked me to come back to go and work in his business up here. We made cemetery monuments. I did that for 25 years.”

However, after the company was no more, Coolbeth was in search of another job to help support his growing family.

He went on to reminisce about his relationship to Johnson before working on campus. He explained that the Willey Library Center was actually founded in his father’s cousin’s name, Richard Willey, in 1971, after he had graduated from the institution.

Now, after over 10 years of working here, he’s become the go-to maintenance man on campus. He helps with a little bit of every department, from technology, to plumbing, to plowing, he helps keep the campus running smoothly.

He also has become the “Rugby Dad” for the Women’s Rugby Club, after being a volunteer van driver for his daughter and the rest of the team during the fall season last year.

“I go to the sporting events. I try to support them as much as I can. I’ve been to softball, I’ve been to lacrosse — I don’t know anything about lacrosse. I knew nothing about rugby,” he said, “so I’m learning on the fly. I enjoy being part of it as far as far as driving you guys around. That’s fun. I wanted to do that. I was going to go to the games anyway, so I might as well drive,” Coolbeth explained. Apparently, the team has been very grateful for his dedication to the task of driving them to away games.

Among the grateful is Paige Coolbeth, his daughter. “He is my role model and my best friend,” she says. “My dad is my biggest supporter on and off the rugby pitch. He has always been there to give me advice and occasionally make me think straight in bad times.”

Desiree Penrod, a senior at JSC, has known Coolbeth for her entire college career. She works in the CES office, where Coolbeth frequents. “Over the years he has been seen in the CES Office always engaging in conversation with the supervisors or the student assistants. Dave, being part of maintenance, always comes to our rescue when setting up events,” she says. Penrod also comments as last year’s captain of the rugby team.

Coolbeth is also known for his friendly demeanor and compassion for others when doing his job. “I enjoy socializing with the kids,” he says. “You guys are what pay my wage. The more kids we have, the better off we are. I think it’s important that you treat them with respect, and I expect to be treated with respect.”

He also admitted if he recognizes someone’s car, he’ll take the time to clear the snow from the parking space. “I shoveled out behind them. That’s a benefit of knowing me, I guess,” he said, followed by a chuckle.

For Coolbeth, the best part of the job, what keeps it interesting and enjoyable for him, comes down to one thing: people. “I think every person has a quality about them. For the most part, most of the kids I say hi to will talk to me and say hi back. I’ve had a few that won’t, but that’s fine. To each their own,” he says.

When it was pointed out to Coolbeth that he didn’t need to be friendly or clean off cars, he said, “I think everybody should. It would make a better community as far as relationships with maintenance and the kids.”

When the interview was over, and his lunch done, Coolbeth collected his affects and stood. He said goodbye to the group of students that had materialized at the table over the course of the meal and lumbered over to the dish return.