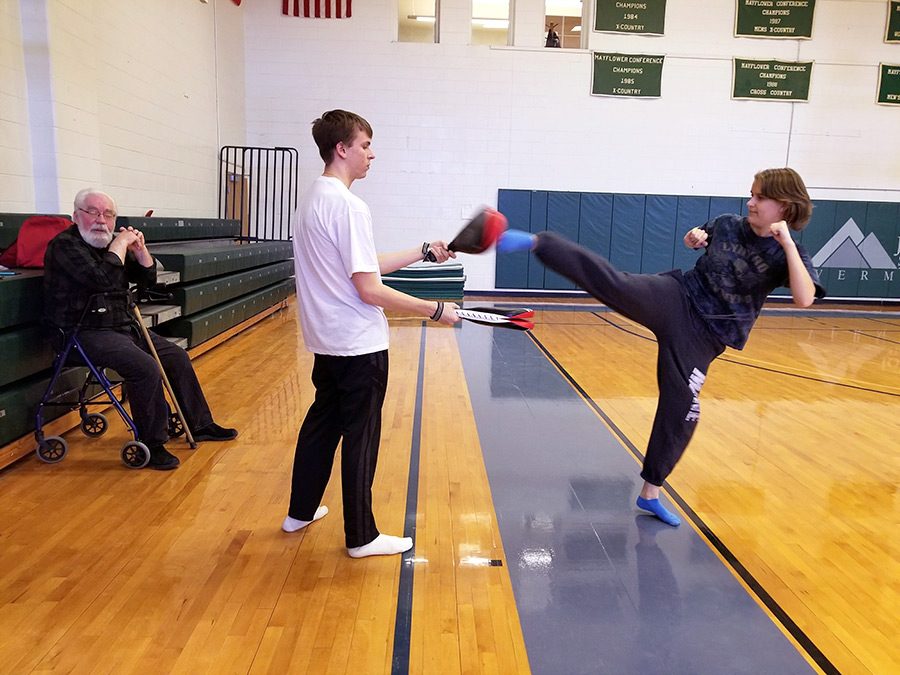 Story and photo by Adriana Eldred

Stanley Parsons, otherwise addressed as Sir, has been involved in Taekwondo since 1984. Now in his 70s, with a thick mane of white hair and full beard, he watches his students critically from behind glasses and between bushy brows. He perches on a walker, a cane resting underneath neatly folded hands, calling Korean numbers as his students repeat a stretch kick, which is the custom at the beginning of class.

They go through a series of moves, from simple ones like the forward kick to the round kick, on to more complicated moves like combination punch-kicks and jumping scissor-kicks.

Taekwondo is a Korean martial art that has existed since the 1940s, spawning from karate, Chinese martial arts and other Korean sparing techniques. It is an art that requires balance of the mind and body, patience and discipline to perfect.

Don’t be fooled by this intimidating image, however; this martial arts class is being held in the SHAPE basketball gym on Johnson State College’s campus, and Parsons has been successfully teaching beginners the ways of the martial arts for over 20 years.

Originally an owner and operator of a saw mill, Parsons’ life took him on a different path. “I was known as the world’s leading supplier for the game of Scrabble,” he says proudly. “Two million square feet a year. So you may have a scrabble game at home from my lumber.”

Parsons began learning Taekwondo a little later in life than one typically begins it, at least with a black belt in mind. “I began when I was in my 30s,” he says. He speaks about his craft with thoughtful deliberation, his gravelly and time-worn voice commanding attention and exuding wisdom, yet with an energy and vibrancy one could expect from someone years younger.

“I chose to start because my daughter wanted to take it with a friend of hers, and I was their transportation. And I was sitting there in the gym like this, waiting for class to get over. I just sat there and watched,” Parsons says.

He explains he soon grew tired of watching and decided to try it out while he was there.

“Finally, one day, somebody asked me, ‘As long as you’re going to be here, why don’t you just join in?’” After a blessing from his daughter to participate in the class, he began his journey into the world of Taekwondo and hasn’t looked back. “By the time she got sick of it, I was hooked,” says Parsons, chuckling.

Now, he and his wife, Alba Rosario, whom he met through the martial arts, operate the Pyramid Black Belt Academy from a garage-turned-dojo in their home in Hardwick, along with the Johnson classes. Over the years, Parsons and Rosario have collected students from all over the world, from Poland to California.

“I have a student in Cincinnati, Ohio, who calls me every time there’s Father’s Day or a birthday,” says Parsons. In fact, it’s the sense of community and welcoming that attracted him the most. “I’ve just found through martial arts a greater community, more family-like than just friend-like.”

Wherever he’s gone, from Australia to Venezuela, from Mexico to Puerto Rico, Parsons says the dojos are overwhelmingly accepting and welcoming.

Furthermore, Parsons and Rosario try to help students not only physically, but emotionally as well. “There have been times where either my wife or myself have sort of been grounding rods,” says Parsons. “Just let them know there’s somebody besides Mom, who may be 200 miles away — that we care and want to be helpful.”

Parsons emphasizes the fact that the class is open and welcome to all students of varying abilities and skills, whether it’s their first martial arts class or they’re already a black belt, which happens to be the range of abilities of students taking his class currently. The class may be about learning physical skills, but an individual can find themselves improving in both mind and body.

“I decided to take this class for exercise, because I knew that I wouldn’t exercise voluntarily,” says Amber Downs, a new student in Parson’s course. “It’s been fun. I’ve learned a lot more than I expected. I feel a lot more confident.”

Although one may not go on an extraordinary spiritual journey to find oneself, many who study martial arts feel they are still a good tool for grounding themselves and even relieving anxiety.

“There’s a sense of discipline to it,” says Isaiah Perry, another beginner student this semester. “The first few classes I took, halfway through the class I thought I was completely spent . . . but I had to keep going and doing it, and forcing yourself to do something that’s painful or something you don’t want to do is helpful sometimes.”

His experiences so far, he says, have given him more insight, something Parsons knows very well.

At the end of class, the students stand in a line facing Sir. He slowly rises from his seat, and together the class angles to the corner of the gym, where the American flag and Vermont State flag hang. They bow. Next, instructor and students face each other and bow. Lastly, everyone turns to the senior student at the very end of the line and bow together. Class is dismissed.