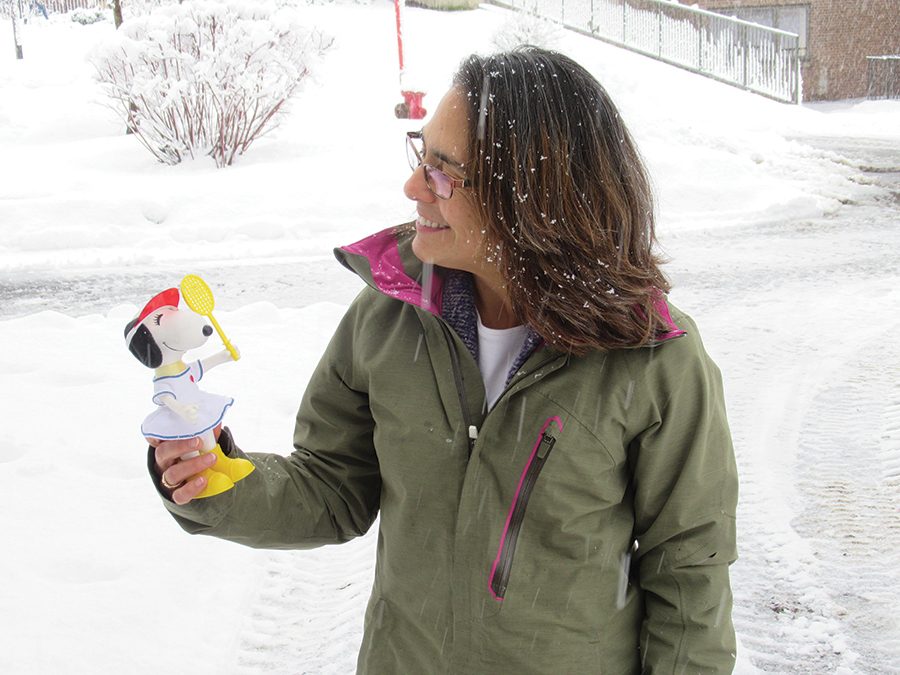 Associate Dean of Students Michele Whitmore has been at Northern Vermont University Johnson for over two decades. The longtime badger is an avid tennis player, lifelong Pat Benatar fan and most importantly, family oriented. The full Q&A on Michele is below:

In your long career as an educator, what was the single weirdest thing that you have encountered?

I can’t think of anything “weird,” but I have said time and time again that in all my years working with students and the conversations I have had with students for the past 24 years, I can write a pretty damn interesting and entertaining book.

Family. I live, breathe and work, for my family. They are my number one obsession. A close tie for second would be tennis and music, and not too far behind them, snoopy.

What has been the worst job you’ve ever had?

My first job out of college was at an insurance company. I was way in over my head and not really ready for life after college, but I needed a job. I faked it every day until I could not fake it anymore and got fired due to poor performance. That was a game changer for me.

I can be cheesy and say being a mom – which is absolutely true. Now, if you are referring to a job in which I get paid, my time here at Johnson has absolutely been the very best job I could have ever asked for and I am not just saying that because you are interviewing me.

What has been the worst thing anybody has ever said about you?

That I am “a f*cking little b*tch with a mustache”! Yup, true story… I can’t believe I just shared that. Unfortunately, I had to make a decision that was not very popular with a student.

What has been the best thing anybody has said?

Anytime someone says something complimentary about my kids Kayla and Dylan. That is always the very best thing to hear.

If you could have dinner with five people, living or dead, who would they be?

First and foremost, my Mom. She passed away 23 years ago and a lot has happened since then. That would be pretty amazing. Then my Dad because he would be so psyched to see my Mom. After them, Charles M. Schulz, Roger Federer, and Pat Benatar. I probably should have mentioned more worldly or influential people, but honestly, I am pretty simple and each person I mentioned were or are influential in my life.

If you were about to die, what would be your last meal?

Yikes! I don’t even want to think about that, jeez. My last meal would be a buffet of Buffalo favorites – Chicken Wings, Roast Beef on Weck, JP’s Fish Fry, and a couple Mighty Tacos. I have a pretty hearty appetite.

What is the best advice anyone has ever given you?

Don’t sell yourself short and stay true to yourself. My parents gave me this advice when they dropped me off at college.

What is the worst advice?

Go where the money is.

Yikes, again, What’s with the mortality talk? “She lived her life to the fullest with her family by her side and always with a smile “

What is something about you that would surprise people?

Well, I did some jello-wrestling in college. That might raise some eyebrows. It was a fundraiser…so…

If a film were to be made about you, who would you cast in the lead? Why?

It’d be tough finding a 4’ 11.5″ person, but I’m thinking maybe Michelle Rodriguez? She’s pretty spunky and a bad-ass in the Fast and Furious! Not to mention her name is Michelle, although she spells it wrong.

Ooh, that is a tough one. I love going to the movies and it’s not just because of the popcorn. Going to the movies was a frequent family outing when I was younger. I really cannot pick one, so I’m going to throw a couple movies out there. Jaws, The Breakfast Club, Shawshank Redemption, American Beauty, Philadelphia, I just saw A Star is Born and it was fantastic!

These favorite questions are very challenging to answer. I love music, more than movies actually. I’ve been to over 200 concerts. My first concert was Pat Benatar in 1979 where it was $9.50 for a ticket. My last “big” concert was AC/DC where it was $150 for a ticket. My, how times have changed. However, the last small venue show I went to was The Record Company at Higher Ground a few weeks ago, which was amazing. What a great venue to see live music. Getting back to your original question, Pat Benatar is my favorite female singer. Why? Because she is 5 ft tall and she can belt out a song like nobody’s business. She studied opera but could not deny the rock-n’-roll in her heart and had to prove herself in a world that was dominated by men. My favorite band is Van Halen -the original with David Lee Roth. I loved their sound, the DLR scream, and Eddie on guitar. Today’s music is lacking good ol’ rock-n’-roll, but I’ve found a few that I enjoy listening to like the X-Ambassadors, The Revivalists, Imagine Dragons, Shinedown. As you can see, I usually have more than one answer.

In terms of temperament, what animal do you think you most resemble?

Ok, now this is ironic, but I took an animal quiz on Facebook a while ago, it was like a ten question quiz and honest to God, my animal was a badger. Crazy, right? Small, protective and passionate.

If you were to be a university commencement speaker, what advice would you offer?

To go out there and do something that you are proud of. Work hard to get what you want and appreciate what life throws at you, even the tough stuff. There is a purpose to all of it.

Another version of favorite, ok, but I’m giving you more than one answer. Two of my favorites were with my husband Ron and our kids Kayla and Dylan, we went to Mexico and Colorado. Another of my favorites was with only Ron, when we just celebrated our 30th wedding anniversary in Hawaii. That trip was pretty spectacular. A couple years ago we went to South Harbor Maine and spent the entire week in and around Acadia National Park. Tons of mountains and ocean, perfect.  Ok, I’m throwing one more in this response, my Mom and Dad took my brother and I on a summer vacation across the country, in a Chevy impala with no air conditioning. My brother was 14, I was 12. My Mom documented the entire trip on a typewriter, everything from losing the map and getting lost several times, to driving through the desert at 110 degrees. Did I mention the car had no air conditioning?  It was not the most perfect vacation but it was a vacation I will never forget.

Ron and I went to the Catskills. We were bored, the weather was terrible, Ron got food poisoning and I pulled a bocce muscle. Really, we played so much bocce because there was not a lot else going on, my arm muscles became sore. Ok, sharing that is a little embarrassing, add that to the list.

Getting back to your job here, what is it that prompts you to say it has been “absolutely the very best job”?

Being able to work on a beautiful college campus and most importantly, working with, and for our students. Helping them be successful in and out of the classroom. Watching them learn about themselves and grow into the people they want to be – it’s pretty amazing and rewarding. This job has also provided me with the opportunity to grow personally and professionally.  To top it all off, I really enjoy the people I work with.

What is the trait you like least about yourself?

I can be overly self-conscious. That sometimes holds me back from doing or saying things that I want to do or say. If you’re referring to a physical trait- well, I’m 4’11.5″, my dream height was 5’4″… I fell a bit short on that – no pun intended

What is the trait you like best about yourself?

I am a pretty optimistic person. I choose to see the positive or potential in most situations. It drives my husband nuts! If you’re referring to a physical trait, I am proud of being pretty healthy and fit.

What concerns you most about the future, especially when considering Kayla and Dylan?

I worry about what the world will be like as they get older. There are more “natural disasters”’ occurring in our county. There are way too many unnecessary and mindless shootings occurring everywhere- schools, churches, night clubs, airports. There’s too much hate. I feel as though our society has lost its way and forgot what truly is important.

Given the chance to be P.O.T.U.S, would you take up the opportunity? Why?

Only to get the current President out of there… But truthfully, no thank you . In my opinion, government is corrupt and broken; has been for years and I don’t want any part of it.

What was the reason you chose to get into the education field?

When we moved from New York, I had to leave my system administrator job; so my husband’s company offered me the opportunity to work with a career counselor to explore career opportunities. I discovered that I really wanted to work in a college environment because my time at college was so impactful for me—I loved every part of it. I applied for a temporary summer position here at Johnson working in Residence Life and in SERVE. It was not long after that when I realized how happy I felt working here and did everything I could to become a permanent employee. Now I’m 24 years later with and no regrets.