Use the force, Robert! 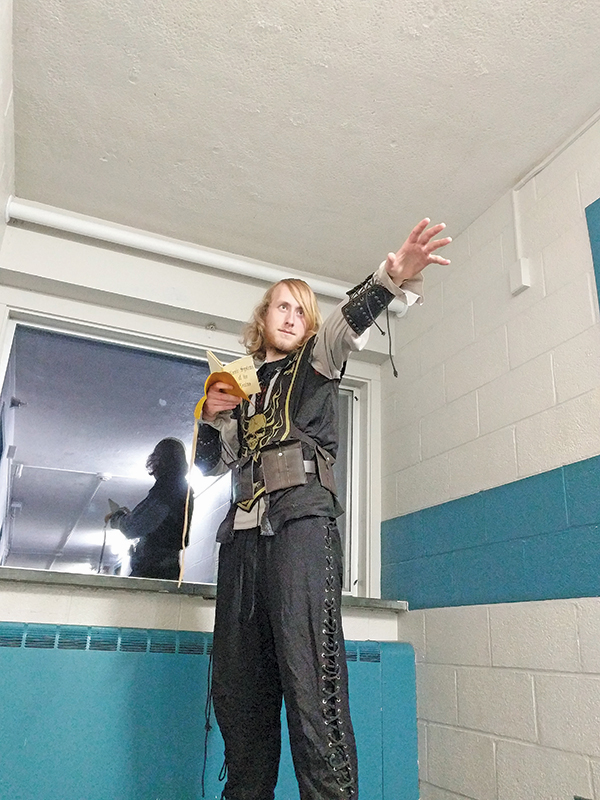 Robert Ferullo is more than a mathematics and environmental science major. He’s also a proud Italian, a musician and a Star Wars superfan. The Massachusetts native spends the majority of his time on campus, where he is a senator for SGA as well as a full-time student. While his chock-full schedule means he’s always busy, you can be sure that Robert will always have a little bit of time to dispense wisdom for you in the form of a “Star Wars,” “Spongebob” or “Golden Girls” quote.

Anything typically nerdy or musical. I am obsessed with Josh Groban, “Star Wars,” science and a bunch of tv shows, like “Spongebob” and “Golden Girls.”

Do you have a favorite “Star Wars” quote?

It’s gotta be something from “Revenge of the Sith.” I can always go with a simple one. I greet most people with a “Hello There!”

What started your love of Josh Groban?

I got into it when I first heard the style of Andrea Bocelli. and then from there, I was interested in how to speak Italian because he sings mostly in Italian. and then my mom, knowing I loved Andrea Bocelli, showed me Josh Groban, and it took a little while for me to get into it but he soon became my celebrity man-crush.

Analogies. I know that’s a really boring answer but I have the ability to compare something to ten other things when nobody asks in less than a minute.

What’s something you could not live without?

Cheesecake. It’s beautiful. Balanced as all things should be: savory, sweet and creamy.

Do you have a quote that you live by?

There’s one from Dr. Seuss that I really like. I’m sure you’ve heard it before. It’s the one that goes, “Always be yourself because those who mind don’t matter and those who matter don’t mind.” I may have switched the order of that.

What do you think other people would say about you?

This one I’ve thought about before. I kind of aspire to be the guy that people look at and say, “Yeah, he’s weird, but he’s harmless.” There are people that you think, “Oh, they’re friendly enough. They’re just different.”

What gives you that different-ness?

I’m gonna get a little deep here. There’s this movie called “Tag.” It’s about four or five friends. Every May they play a big game of tag. It goes on no matter where they are: job interview, at work, it doesn’t matter. The philosophy behind that? The reason people grow old is they stop having that sense of fun. I think that’s my most unique trait. I haven’t let go of that. I live action role play and play Humans versus Zombies. I spend most of my day coming up with new and absurd concepts because that’s what I find interesting and fun. I’m not really afraid to share that with the world.

You’ve mentioned to me before that you and some friends play other kinds of games on campus together. What are those like?

I go through doors weird. My friend Isaiah and I have a game where every time we go through a door, we have to go through it a different way. It doesn’t matter who’s around, it doesn’t matter where you are. You have to go through the door weird. And if you forget or chicken out then you lose. Another reason behind this? I think people take life way too seriously. If something makes you happy and you’re not harming anyone else, why hold it back? Life is too short to worry about that kind of thing.

What got you interested in Live Action Role Play (LARP) and Humans Versus Zombies (HvZ)?

I think a lot of it is a simulation of that ‘danger’ aspect. You’re never actually in danger. It’s an adrenaline thing, I think. I also enjoy acting but never got into the theater or anything like that. With LARP specifically, I think it’s a good escape because it’s a chance for you to create this alternate persona and then be that person. It’s entirely separate from your own troubles. That person can’t feel pain because it’s all just acting.

My LARP character’s name is Gale Redwolf. When I’m Gale, I’m not thinking about taxes or school work or how much money I owe the school, because he doesn’t have any of those problems.

What kind of problems does Gale have?

Gale? Although I try to remain in character most of the time, my social awkwardness does carry over into the character. That’s a little bit harder to overcome. Also Gale, just like me, is, as we say, broke. At the last LARP event, he made 80 gold doing chores for other people. That’s about $20 in real life. I spent a good hour of the event washing dishes because I was poor.

Would you rather always speak your mind or never speak again?

I’m gonna go the safe route and say “Never speak again.”. I think I’ve developed a good poker face over the years, and a poker voice I guess. There’s a lot of drama on campus and I think I pretend that I don’t have certain feelings what someone tells me. I try to stay stone-faced. If people knew that I was really thinking, “Just get over it, I don’t care,” a lot of things I don’t want to happen might.

What is your most treasured possession?

A memory of sorts. Not something that’s tangible. I prefer to collect memories and experience. Some of those would be my first trip to Europe or performing at the Hard Rock Cafe in Boston.

What wouldn’t you do for a million dollars?

I don’t really know. I’ve been asking people this kind of question all my life, like “What would you do for a Klondike bar?” but I’ve never come up with an answer myself. I guess my philosophy lately has become, “I’ll do just about anything for the right price.” But prostitution. I wouldn’t go into prostitution for a million dollars.

But would you do it for a Klondike bar?

What is your pet peeve?

I have a pet dog and a pet rat, but I’m not sure what a peeve is. Is that an indigenous animal?

In all seriousness, I’ve noticed something, especially this week. Every sick person has felt the need to touch me. I don’t like that.

I let my dog lick my face. I’m not a germaphobe. Although that may be biased because I usually like dogs more than people. I just don’t like when people sneeze directly into their hands and then pat me on the head.

If you were terminally ill, what would you want your last meal to be?

The hearts of those who have displeased me. Definitely not raw. If you could cut it up and put it in an alfredo, that’d be cool.

What is your favorite food?

That’s a hard one to ask an Italian. I’m gonna stay away from the classic answers. I always like spinach and cheese squares and stuffed mushrooms. Dumplings. Oh, and rice. I love rice.

What is your guilty pleasure?

Finding really any remotely sturdy branch in the woods and pretending I’m a Jedi with it.

I’d be an unconventional Jedi, like Qui-Gon Jinn. In “The Phantom Menace,” they all told him, “Don’t train Anakin. He’s too old to be a padawan.” Qui-Gon says to them, “Eh. It’s fine, don’t worry about it.”

That’s kinda me. I’m laid back about everything. I try to be a good guy, trying to protect the galaxy and whatnot. But the Jedi council, their rules are too strict. I want to be a part of the club without following all the rules.

Yeah, pretty much. He doesn’t always follow the rules but people tolerate him. That’s me, I guess.

What got you into Star Wars?

I actually don’t remember! I’ve been into it for quite a long time. I think one of the reasons it’s resonated with me so much is because I find Anakin to be a relatable character. I know a lot of people hate him, so that might sound weird at first. But I think he’s relatable because his story is one that makes you sympathize with the villain. In the original trilogy, you only see him as Darth Vader, a ruthless killer, the most feared man in the galaxy.

But in the prequels you see him transitioning into Darth Vader. You begin to understand why he was the way he was. He really had an awful life. You start to feel bad for him.

I think it’s really cool when a story can make you sympathise with the villain.

So if they were to make a movie about you, would you be the hero or the villain?

I think I’d attempt to be a hero and I’d come in and contribute something that everyone else already knew. We’re leading the battle and we come to our enemy. And I’ll come up with something great, something original, and everyone else will say, “We tried that last week. Where were you?”

And I’ll say, “Oh, I wasn’t listening.” Or I misheard them. My brother likes to make fun of me and say I could never be a soldier because someone would yell, “Grenade! Get out of there!” and I wouldn’t hear them, or I’d say, “Oh! I thought you said lemonade!”

I’d be doing my best, but I wouldn’t really get anything done.

What do you want your legacy to be?

I’m trying to make a leg pun right now. I don’t have anything. Actually? A football playing king in space. With a mustache.

Oh, I got it. Did you know the guitarist of “Queen” has a Ph.D. in Astrophysics? I want to follow that route. I’m a science and math major now, but my big goal is to make it in music. I want to be that guy that’s like, you know that celebrity that nobody really knows the name of, that can’t go a day without quoting the “Golden Girls,” “Spongebob,” or “Star Wars?” Well, he’s the guitarist of this band no one’s ever heard of and he has a bachelor’s in environmental science. Someday I’ll be a “Trivia Crack” question. That’s my goal in life.

I also want my name to be on a Cards Against Humanity card: “What is Robert Ferullo thinking right now?”

What are you thinking right now?