Soylent: “The most vomitous thing I ever put in my mouth” 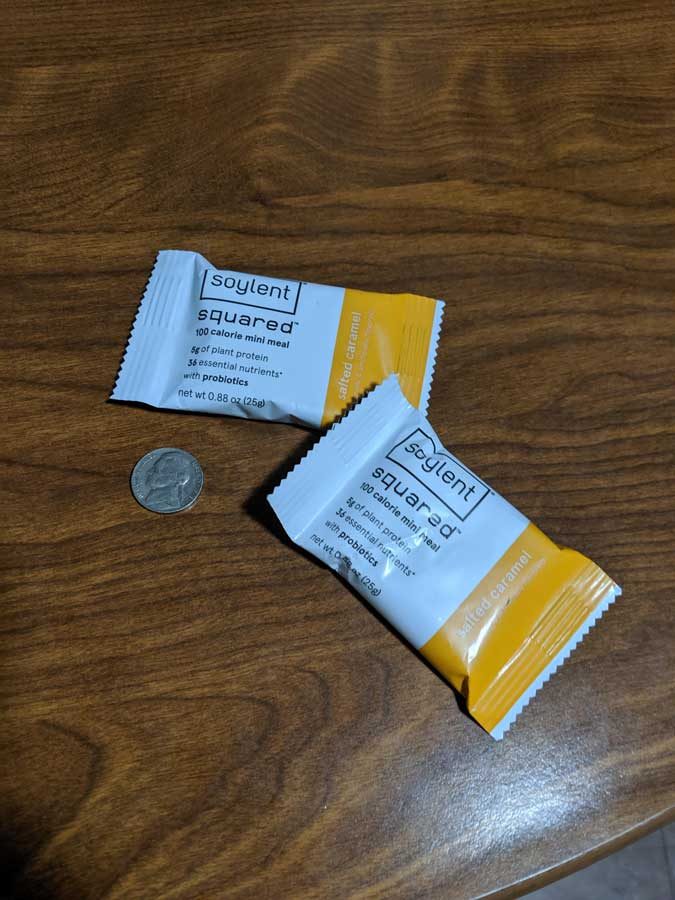 “I’m sorry,” I said, to no one in particular. “This does not taste like food, let alone something that I could stomach eating for breakfast, lunch and dinner for three days.”

The nobody in particular didn’t say anything, probably because I was sitting in an empty library, and said nobody was, in fact, nobody.

It was mushy, oily, and confusingly vile– not the worst thing I’d had the utter horror of trying to consume, but also “just eh.” It was somehow smooth and also sticky. It was, well, a “Soylent Squared” meal replacement bar.

I should have known from the vile origins of the name of this particularly awful substance that it would be gross: “Soylent,” as it’s called, gets its name from the 1973 movie “Soylent Green.” The eponymous substance in the movie is intended as a meal replacement for an overpopulated earth, and it comes in these little green chips. The catch? “Soylent Green is people,” cries the protagonist at the end of the movie. “You have to tell them! Soylent Green is people!”

Yes, this movie is both one of the best and worst movies I have ever laid eyes on.

Proponents of “Soylent” argue that it solves real-world problems. Because it is exactly what you need and nothing else, it takes the mystery out of food. Only consuming “Soylent” products could drastically reduce food cost, from around $450/month to around $50. It could hypothetically solve world hunger.
More rational people suggest that it takes all the joy out of eating, as the original iteration of Soylent was simply a powder added to water. I imagine never chewing your food might get weird after a while. The further iterations have added flavorings and other gimmicks to make the sludge easier to palate.

Flash back a couple of weeks: I’d heard about this mystical and somewhat scary product and decided to get my hands on it and try it out.

I couldn’t get myself to commit to buying a 10-day supply of the powders or the pre-mixed drinks. That’s 30 straight meals of nothing but Soylent, and I’m too much of a hedonist to subject myself to what one reviewer called, “the most vomitous thing I’d ever put in my mouth, and my ex only showered once a week.”

Instead, after some browsing of the website, Soylent.com, I found “Soylent Squared,” which is advertised as a “100 calorie mini-meal.”

There are three flavors: “decadent Chocolate Brownie, butterscotchy Salted Caramel, and bright and fruity Citrus Berry,” according to the website.

“Okay,” I thought. “How about I do three whole days of eating nothing but these bars?”
The cheapest and smallest quantity available was $30 for 30 bars. I chose the Salted Caramel variety, on a whim. The website offered free shipping, so I took that.

These bars are advertised like the drinks: they are full meal replacements. According to the website, “With 5g plant protein, 36 essential nutrients, and plenty of probiotics, Soylent Squared lets you skip the vending machine and snack complete.”

I am not ashamed to say that I was a skeptic. Can these really replace my meals?

The bars arrived three days late, and the tracking number they emailed me didn’t work. But the bars were in my hands, and all I had to do was open the box.

A single Soylent bar seems small to have all of this content packed into it. It weighs less than an ounce, with a rather minimalist packaging. The same “5g of plant protein, 36 essential nutrients,* with probiotics” is written on the front.

Notice the asterisk: underneath the folded flap says, “Includes 2 essential fatty acids and 9 essential amino acids.” I don’t know what that means, but it might be science.

The actual bar is unassuming. It smells incredibly strong of caramel, and looks quite like a hunk of the stuff. It’s frustrating to pick up out of the packaging, because it’s covered in some sort of oil -looking at the ingredients list, I can guess it’s canola oil. It looks like, according to a friend, “the inside of a Fig Newton,” but biting into it gave me whiplash.

I’m not sure which is stranger, the texture or taste. It’s as if someone added pea-sized bits of an unflavored oatmeal cookie to a piece of caramel saltwater taffy, but then removed the taste of caramel. Because it smells so strongly of caramel, though, I almost want to taste it, even if it’s not there.

All that to say it’s chewy and somewhat gritty, with a sweet and oaty but also nondescript taste. There’s a saltiness to it, too, but it floats around the main palate and is barely noticeable.

Gastronomically, it’s a confusing experience. I didn’t have to choke it down, but I wouldn’t reach for it to satisfy a craving for caramel or choose it over a real breakfast, lunch or dinner.

Here’s the kicker. Knowing I couldn’t cough down 10 days, I thought about trying these, and only these, for a weekend. Cut to me, apologising to the empty library.

I also couldn’t go through with a plan to only eat these for a few days. They’re actually not nutritionally equipped to be a meal, even with three or four, regardless of the advertisements. Eating 12 a day only ends up being 1200 calories, and I routinely eat about 1600. Plus, with those 12 bars, I’d be getting way too much protein and not enough fat, sodium, carbs, or sugar for my whole day. I’m not about to purposefully self-sabotage my health, tenuous as it is already.

More invested reviewers on the internet called the “Squared” bars the best part of the “Soylent” brand, which makes me glad I didn’t try the original. This one also has probiotics, which for a person with GI issues, was a nice touch, but those “regulatory effects” that I was supposed to feel didn’t kick in within the first few days.

I would like to say that eating these as a snack might be a way to consume calories appropriately, but I found out, quickly, that the “probiotics” in the soylent bars have a compounding effect. After eating one a day for a whole week, I was then stuck on the toilet for what seemed like a whole week. I guess this could be in lieu of a juice cleanse?

It should be noted that there are studies that show that synthetic plant protein can exacerbate digestive and/or thyroid issues, but please do your own homework on diet foods. I didn’t, and I paid for it.
Here’s the thing: unless you want a subpar lunch snack, then, six days later, a hundred-yard-dash to the bathroom in order to save your favorite pair of jeans from browntown disaster, I wouldn’t recommend Soylent.

If you’re a sociopath who hates the flavor of food, these will be perfect for you. Call me: I have half a box left.