He wants to be a lazy bum! 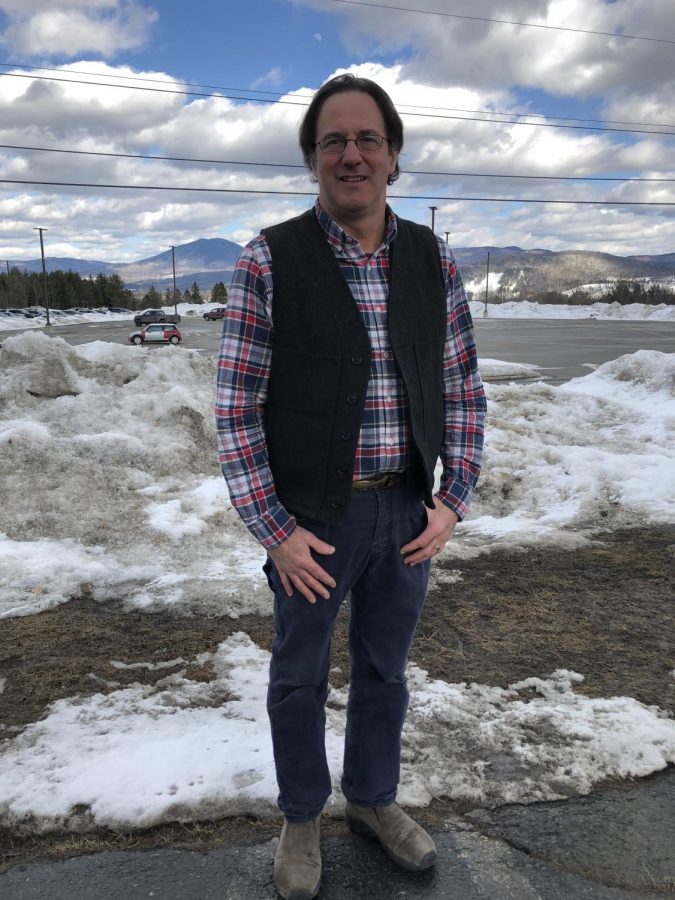 Michael Stevens is director of facilities and physical plant on both campuses of Northern Vermont University.  He’s very busy, although he dreams of being “a lazy bum.”

What obsesses me? Not a lot obsesses me. I take life as it comes, and that excites me. But it’s rare that I’m obsessed by much. The closest thing I would say that obsesses me is meeting a schedule and being successful.

What are you superstitious about?

I can’t say that I’m very superstitious either. I have a lot of faith in what life presents and most anything in front of us is what you need to be travelling through at the time.

If you could be any animal, what would it be?

It’d be a brook trout. Brook trout are native to my native land. They’re one of the most beautiful fish that anybody could ever lay their eyes on. Their color ranges from whites to blacks to two reds to blues, so they represent almost every color in the rainbow. Those are a few of the reasons why brook trout came to mind.

Where are you from?

Yes, most people don’t know where Saxtons River is.

Where is it geographically?

So I went to high school Bellows Falls Union High School, so it’s in the southeast corner. There’s a series of small bergs around there. Saxtons River, Cambridgeport, Athens, Grafton, Chester are all just small, rural Vermont communities.

What is your favorite piece of clothing that you own?

My vest. I have a few vests, but there is no particular story behind it. I do have vests for different occasions. This is more of my work vest. I have another similar wool vest for the woods. And I have another similar wool vest for occasions that require the vest to be a little sportier. And it’s a new trend for me, I think. I think it’s been acquired since I’ve arrived here on campus, maybe the last couple years. I will, from basically the beginning of semester to the end of the school year, be donning a vest.

What has been your most embarrassing moment?

On campus or in life?

Just whatever comes to mind.

So, our – I don’t know if I want this in the record. Yeah, I’ve got embarrassing moments, but I can’t share. Wouldn’t say it’s my most embarrassing moment, but one thing that I did find embarrassing is that only two months ago is the first time I’d ever put together a PowerPoint presentation in my life.

What was the presentation for?

There’s my memory problem. I can go back and find it. What was the PowerPoint presentation for? It was for work. [finds powerpoint on laptop]. So, it was a PowerPoint on our new vehicle reservation system for reserving campus vans. See? It’s not very exciting. I knew that I’d done it. It was more impressive or exciting or strange to me that I’d never done a PowerPoint before in my life, and then finally had the need to do so and was able to execute it. That’s what imprinted into my brain. What exactly it was about or for, not so much.

If you were a crayon what color would you be?

I’d be green. Green is my favorite color. Green represents life to me. And I could have a box of crayons that are all different shades of green.

Here’s a fun one. If a film were to be made about you, who would you cast as the lead?

I’ve watched like six movies in my life. So, who would I cast as the lead? I don’t even know any actors. I mean. Who would I cast to play me? Kevin Costner. He’s played some diverse roles that, some of those characters that he played, do represent pieces of me.

If money wasn’t an object, what would you buy?

Money’s not really an object to me. I’m lucky enough to have a job I love, and I’ve had jobs I’ve loved most of my career. So money doesn’t bring a lot of importance in my life. I’m happy and satisfied whether I’m fishing the stream or fishing on my boat. And I only have a boat because I’ve acquired some more money over my life, but it doesn’t bring me any more happiness. So what would I buy if money was not an object? I would buy homes. I would buy homes in various places so I could see and experience various places.

What do I like most about myself? I think what I like most about myself is I really like learning and things that are new to me. I have a curiosity that energizes myself, and when I’m entering that stage of the unknown, I feel good about the excitement that exists. Sometimes that excitement and the unknown is so unknown that it makes you uncomfortable. And I’ve experienced that and don’t like that much unknown, but I’ve always come out the other side.

Are there any recent experiences where you had to enter that unknown?

You know, I would say, taking on this professional change of coming to Northern Vermont University in its infancy and trying to successfully play a role in bridging our two campus communities. It’s been very fulfilling, and it was a challenge in front of me that was pretty much undefined. You didn’t know. You couldn’t draw it out of somebody in an interview because the people that were engaging in it were immersed in it themselves and in the middle of the change and couldn’t necessarily define how that change would come about. So I’ve loved that challenge, and I’ve loved participating in that process.

What’s one thing you would change about yourself, if you could snap your fingers and change one part of your personality?

Opportunity for you to be a lazy bum: If you were stranded on an island what forms of entertainment would you bring with you?

My brain, a fish pole, and I’m not an artist or a writer, but I think I’d like paper and pencil. I think if I had that much free time I would become an artist and a writer. Maybe not a good one of either… I’d be fishing. I’d be practicing being a lazy bum. But my brain that I brought along would probably keep me entertained. Yeah. And I’d need an outlet for that.

You do a lot of fishing. What’s your proudest catch?

What’s my proudest catch? My proudest catch is not my proudest catch, it’s actually my brother’s. We had a remarkable first experience at a small place called Peacham Pond, where a truly trophy fish was landed, and I had the ability to experience that with him, and I’ve never seen another fish like it. I’ve seen a few photos of fish like it, but I’ve never seen one in person that was this original of a specimen. In some ways, it’s sad that that fish didn’t live another day. In some ways, it’s just remarkable to have been able to be there to experience that came through the ice that one day.

Do you remember what type of fish it was?

It was a brown trout.

Are there any other memorable fishing experiences you have?

I’ve been to Alaska a few times. I have been several, several miles out on the ocean in a boat that was a friend of my uncle’s. We got to fish in places that tourists don’t typically go, and we got to fish techniques that you don’t get to typically fish in a paying charter situation, so we had an incredible experience then. It was such an incredible experience at many levels. It wasn’t just the fishing, it was the fact that there wasn’t another fishing vessel within sight, so you really were exposed to the elements. You get to experience the currents because of where we went. The ocean had to funnel through some restrictions, so the changes and currents while we were there was incredible, and because we got that experience we also got, you know, a more personal experience with the operator of the vessel. He wasn’t an everyday captain. He’s somebody that grew up in the land and was able to share some, I think, more intimate experiences with us.

If you could go back in time what time period would you go to?

I don’t know that I have a specific century, but I’d go back to a day before there was electricity. I’ve actually been thinking about this question for a few months now, not this particular question, but I think I’ll just lay out what my thoughts have been. I’ve been thinking about how much time humans now have for maybe something like this [gestures to interview], or something like this [gestures to phone], or a video game, or to get lost in your screen. How much time have we created for ourselves that’s unfilled, and how do we fill that time? When back before there was maybe electricity, I might have to spend four months of every waking hour preparing my woodpile, just so I could survive through the winter. And that physical activity, that sense of accomplishment, that also continuous activity, thinking about how much wood do I need, created, I think, a different mindset, in a different time and a different way to use our brains and our bodies, than we get to experience today. Technology’s freed us up of so much time, but that rapid technological advancement, how is that, in a Darwinian sense, impacting the developments of our human brain? So I feel like potentially our brains were more utilized when we actually had less time, so I’d like to go back and experience life at that time.

Do you think you’d ever do a tech-free retreat where you go into the woods somewhere?

I pretty much do that regularly. The older I get, the more I appreciate Vermont’s deer season. The older I get, the more technologically advanced it becomes, that our camp changes too, subtly. It’s not as rustic as it once was, but I get a lot of time in the woods in the fall, free of a lot of technologies. Not all of it, I’m not taking a backpack and tent and spending seven days out there, and I don’t necessarily aspire to be free of it all and take that route, but I could. Any of us could. But I do see potentially other ways to do exactly what you’re saying being a possibility. Several mile, several day canoe trip. I’ve desired to canoe the Connecticut River from the beginning to the end. It’s something that I see myself doing the future.

I hope I’m too young to understand what my legacy will be. I would like to be somebody that does help our society, has inspired growth, has inspired change and has been one to embrace the positivity of change.

Here’s a more lighthearted one: would you rather fight 10 duck-sized horses, or one horse-sized duck?

I would rather fight 10 duck-sized horses, no doubt in my mind, because if a duck was as big as a horse and had any ounce of acting like a goose, I’d be done. I have a fighting chance, I think, with 10 duck-sized horses. One duck sized horse would be the end of me. My legacy would start now.

What would you put on your tombstone? Would it be “defeated by one horse-sized duck?”

No, it would probably be “Duck it. If I was only a little quicker, I could have ducked it.”