Eat, drink and be Berry 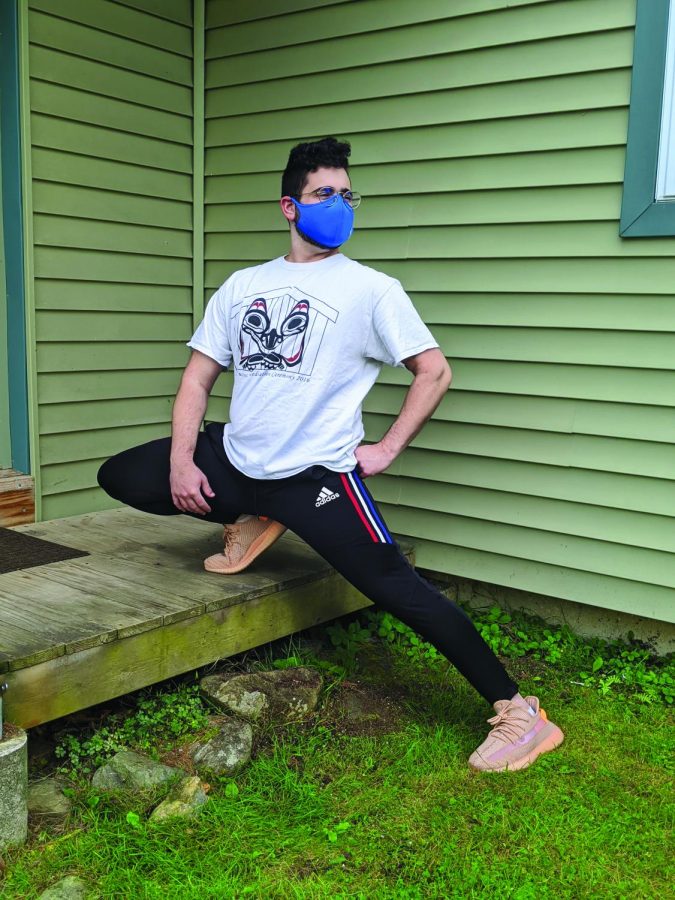 Ely Berry on his front porch

Ely Berry is a psychology major and music minor from Westfield, Vermont. His hobbies include watching movies, listening to music, watching basketball, and playing video games.

If you were stranded on a desert island, and you could only have three movies, what would you take?
“Interstellar,” that’s definitely my favorite movie. That’s kind of a bro-y answer, but I would take that for my intense movie. I think for a feel-good movie I would take “Goodwill Hunting.” And to make my girlfriend, Amanda, happy I’d take the “Grand Budapest Hotel.”

What’s your favorite genre of music?
It depends upon the day. I like a funk, disco, modern disco, happier-sounding, dancy stuff. What else? I enjoy rap—not mumble rap, more mainstream rap. I like Kanye. Actually, I’m not sure how much I like Kanye as a person, but I like some of the music before he went ballistic. I also like classic rock.

What are you obsessed with?
I’m obsessed with the Toronto Raptors basketball team. I’ve been obsessed with them since 2015. Here’s the thing, if you put that in the newspaper, they just won last year in February, and I’ll look like a bandwagon fan. I was there for them when they were bad.

If you were a superhero, what would your weapon of choice be?
I’ve always wanted a lightsaber. Maybe for copyright purposes we don’t call it a lightsaber. But something lightsaber with the whole indestructible blade of light. I don’t know if we can get to the physics of lightsabers, because that’s a whole other conversation. But typically speaking, the lightsaber would be weightless. In the movies they have some weight to them, but for me they’d be weightless, you wouldn’t be able to see them, and they would go in infinitely. You’d have to hold it straight up.

That presents an issue when it accidentally turns on in your pocket.
Then you’ve chopped the world in half.

What’s the best piece of advice you’ve ever gotten?
I don’t know if I’ve ever received this advice; I think I’ve probably pieced it together over years of wisdom from multiple different people: If whatever you’re doing doesn’t make you happy or it’s not working towards making you happy, then there’s really no point it doing it. I guess that’s “Do what makes you happy.” That’s super cliché, but it’s good advice.
I rationalize a lot of my actions doing that. A couple years ago I wanted to work out all the time and get jacked. But I tried. I was running and I thought, “running is not going to make me happy.” I love eating pizza, and I know the happiness that being jacked would bring me would not be as good as the happiness brought by a couple of slices of ‘za.

What is your dream pizza order?
I’m a simple guy. I like a good cheese pizza, boring stuff. I also really like barbecue chicken and buffalo chicken pizza, respectively.

What is the meanest thing anyone has ever said about you?
Nobody really says mean things to me. I mean, maybe that’s just my ego, kind of deflecting. The one thing I guess that sticks out was really the best backhanded compliment. Somebody said to me,” Ely, you’re like if Danny DeVito and the Hulk had a baby.”

I know you’re a little bit of a secret Star Wars fan. Do you have a favorite Star Wars quote?
This isn’t just a quote. It’s the whole Obi Wan Kenobi versus Anakin Skywalker fight from Revenge of the Sith. Because it’s all so good. It’s definitely there. My favorite quote’s definitely in there, but I don’t know which one it is.

If there was a film made about your life, who would you cast to star as you?
Either Elijah Wood or Daniel Radcliffe: just small men. Maybe in the summertime, Aziz Ansari, though I don’t really get that dark in the summer. The egotistical part of me says Robert Downey Jr.

What would your last meal be?
Well, I love steak. But I’m also lactose intolerant. So, maybe, like with a lot of cheese as well. That way I won’t have to reap what I sow because I’ll be dead.
So maybe a steak with a tall glass of milk. A beer stein of milk.

So now that you’re dead, what do you want written on your tombstone?
Probably my name? My name, yeah. And something simple. “Elijah Berry Was Alive.” Because that will never not be true. Unless this whole thing was Weekend at Bernie’s.

What are you superstitious about?
The pyramids. I don’t buy it.

Just that they exist?
Okay, so I don’t really like conspiracy theories, and I think most of them are garbage and there to stir the pot, but I like the one that says that the pyramids in Egypt were built by aliens and that the technology is so advanced that we think it’s ancient. One day we’ll be able to figure it out and we’ll use the pyramids as a communication device.

Do you believe it?
It’s ridiculous. They’re rocks, and slaves put them there. That’s what happened. Here’s the thing: be superstitious about whatever you want. Anything is spooky if you think it’s true.

You’re a new addition to the crayon box. What color are you and why?
I’m red-wine stain purple. I feel like that color is just not accurately represented. You have to differentiate. If you’re drawing a picture of somebody with a wine stain, right now you’d just use a purple marker. That could be a jam stain. You gotta differentiate.

Do you have a worst date story?
Okay, here we go. It wasn’t a bad date, but it was a bad thing that happened to me, and I feel bad about it. A couple years ago I went on a date with this girl who was an identical twin—as in she had an identical twin. I went on a couple dates with her before meeting her twin. She was housesitting with her sister, and I went over there to hang out. Then I met the twin [that I wasn’t dating] and even though they’re identical I was way more attracted to the twin.
So that kind of put a damper on that.

How about an embarrassing moment?
Here’s the thing, I hosted an open mic in high school. I don’t think it was embarrassing, I really don’t. But I always have a fear that other people didn’t like it, even though I heard countless times that it went all right. But I always had a fear that it was terrible.
I didn’t prepare any jokes or anything, but people were laughing. I just kind of talked, and to close the evening, I invited anybody onto the stage. We played an acoustic rendition of Nickelback’s “Photograph.” There were 30 people on stage, they’re screaming, it’s great. Nobody knew the words.

And you have a fear people didn’t enjoy it?
I don’t think it was as good as people told me. Like they were protecting my ego.

If money wasn’t an object, what would you buy?
If I was Jeff Bezos, I would make a list of every country that I want to go to. And then I would go on Zillow or something, and I would just buy a dope-ass house in each of those countries, and then spend the rest of my life living a year at a time at each of those houses.
Think about it. I’m 21, so I’ll probably live for 60 more years. So find 60 countries, buy 60 houses. If I get bored of that then I could stop.

If you could be anybody else for a day, who would you be?
I think I would be LeBron James. Just to be the opposite of me for the day. That’d be great. I don’t know if I’d want it to be a game day or not, though. I guess, if I’ve got his physical attributes. Then I could probably figure it out. I don’t think I’d be effective.

Given that, what do you think the commentators would say about your performance on the court as Ely-as-LeBron?
“Why is his posture so bad?” Maybe something like, “LeBron has a severe lack of confidence on the court today.”

What is your favorite piece of clothing that you own?
Oh, it’s got to be my Yeezys. Amanda got me Yeezys for my birthday last year. I don’t get to wear them a lot because I only wear them when the weather is perfect.

If you could go back in time, what time period would you go to?
As a jew, there’s not a whole lot of places in history where you can really… well. Such a good question. I mean, 2016 was pretty great.

I’m with ya.
Okay, realistically? Probably ancient Rome or ancient Greece or something like that. Just because I’d love to see like the Colosseum in its heyday.

As long as you’re in the spectator seat and not face to face with the lion?
Ah, gladiatorial combat. I think I’d be decent at it. If I can take my day as LeBron James, then I could probably do it.

You might have a fighting chance, then.
He’s lucky that he didn’t exist in Ancient Greece, because 6’9” and 260… he’d have to fight, like, five lions.

What do you want your legacy to be?
I’d like people to think that I had a good time and helped others have a better time. Happiness.