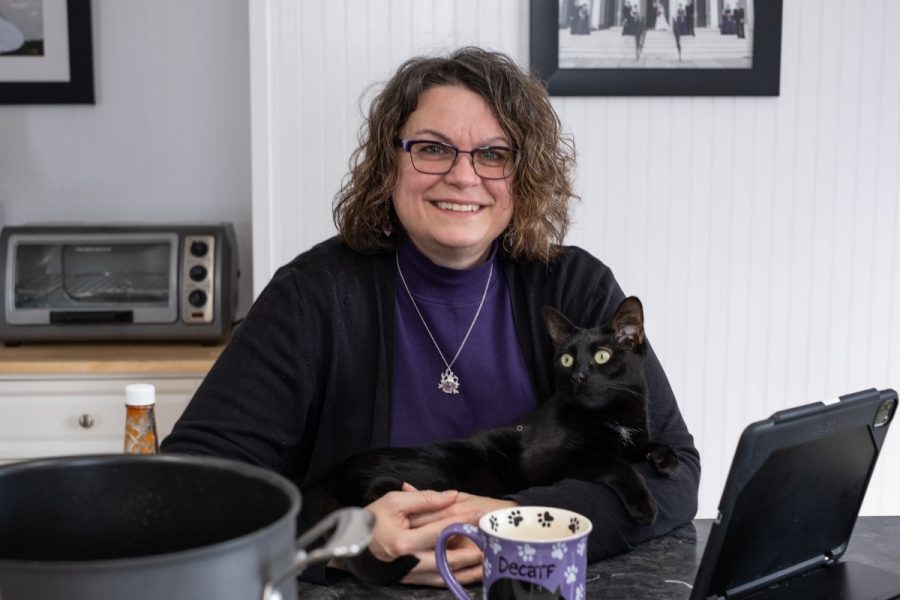 Julie Theoret and her little fur baby hard at work

Julie Theoret is a professor of math at NVU-Johnson, as well as chair of the math department, chair of interdisciplinary studies, committee chair of the Johnson chapter of the Vermont State College’s Faculty Federation, and treasurer of the Vermont State Colleges faculty Federation. When not inhabiting one of her many chairs, Julie is probably snuggling with a fur baby or watching Stargate.

What made you choose math over engineering?
Honestly, the classes I took in engineering were just really boring and I didn’t like them.
I realized what I liked was math, and what I really liked was helping people learn math. When I was a first-year student at UVM, I was in a calculus class with a bunch of people who became my friends. We would sit through calculus class, and at the end of class my friends were like, I have no idea what just happened, and I said, Oh! Let me teach it to you! We would go to another classroom, and I would reteach what the professor taught, and then we would work on homework together. In doing that, I realized that I liked doing it, and I was good at it because they actually understood it.

What is your favorite iteration of math?
I’ve sort of been focusing on the teaching aspect of it, but when I was learning math, I really, really liked combinatorics. The basic idea behind combinatorics is counting up how many ways you can do something. For example, if your wardrobe has five shirts, three pairs of pants and three hats, how many different outfits can you put together?
I’ve always found that to be fascinating, but and I also just love solving a really hard algebra problem.

What’s the one thing that you’ve picked up during quarantine that you’re not so happy about?
I don’t get nearly as many steps as I used to. I used to get steps just walking down the hall to the coffee room, or whatever. I just don’t get out of my chair enough, especially in the winter.
Also, probably afternoon snacking.

What’s your guilty pleasure?
So lately, as you probably know from my little write up, I think I mentioned MacGyver. Richard Dean Anderson. My pleasure right now is rewatching the entire 10 seasons of “Stargate SG 1”. That’s what I do every night. My husband is an early to bed early to rise type, so he goes to bed usually by nine o’clock. And so, then I turn on the Richard Dean Anderson.

And how about parcheesi?
Love parcheesi!
Unfortunately, my husband doesn’t like it, so I don’t get to play it as much, but I’ll play it with my mom. I played it a few times on Zoom with a friend because there’s a really horrible online version. It’s awful, but in college my best friend and I just liked to play these parcheesi tournaments.

What’s your biggest pet peeve?
I have a lot of pet peeves. My husband does a lot of them.
When people post on Facebook, and they have an error in their post or comment and then they make another comment underneath it, fixing it instead of just editing their freakin post or comment. That’s one.
When my husband leaves the milk out. That’s one. Gosh, so many things.
I don’t know, maybe when students email and ask me a question where they can just like look at the syllabus or canvas or something. Although, I have to say I try not to be rude about it when I’m emailing, but next time, maybe look in the syllabus.

Something I didn’t know about you is that I hear you enjoy some musical theater. So, what’s your favorite show?
My favorite show, which I’ve been in five times, is “Pirates of Penzance.” The first time I was in it was my senior year of high school.
I decided to do chorus, much to my mother’s chagrin, but it was the best decision I ever made. I had never heard of Gilbert Sullivan before I’d auditioned for it. It was such a fun show.
Then I did the show again when I was a faculty member at Lyndon with a community theater group, the St. Johnsbury players.
Then after coming to Johnson, I found out about “Pirates of Penzance” being done in Enosburg, and so I hightailed it from Hardwick to Enosburg for the summer. Then in the spring of 2019, Johnson decided to do “Pirates of Penzance,” so I did it again. And then the same director and musical director did it at a local theater near me called Unadilla.
It’s the storyline, it’s just very, very funny. If I could be in it, like if somebody said your full-time job could be you doing this show from now until I died, I would.

What’s the weirdest or the silliest thing that you’ve ever solved with math?
Prior to the two cats I have now, I had a cat that I got from the shelter back in 1995 when I was in graduate school in Virginia, and I had her until 2013.
As she was getting older, she started getting sick. And she had, I can never remember if she had hyperthyroidism, or hypothyroidism.
But she’d be starving all the time. So, then she got mean because she was hungry all the time. I had to put her on a special diet, but you know cats, you can’t just change their food, because then they will just puke. Anyway, I had to wean her off her older food and get her on the new food.
I had to figure out how much to give her, so I was basically doing proportions. I was doing three quarters of old food, one quarter new food, and she had this much and then I had to divide it into the dry versus the wet. So, then I was going into like 1/32 tablespoons. If I didn’t know arithmetic, I would not have been able to do that. But that is probably the craziest thing.

What’s your favorite thing outside of math?
Well, probably playing games and musical theater. And my cats.
And my husband, I suppose I should put him on the list.

What’s the best piece of advice someone’s given you?
The best piece of advice I’ve received, which, I still can’t follow most of the time, and it’s probably a cliché one, is don’t sweat the small stuff.
Because, I do constantly sweat the small stuff. It’s advice I’ve been given that I’m not very good at taking, but that’s sometimes just the way with good advices and stuff. That’s probably the best advice, but I need to learn about when to actually do it.

What’s the worst piece of advice you’ve ever gotten?
Don’t sweat the small stuff? Because, I can’t really follow it ever. I don’t know if I’ve ever really been given bad advice though. I think I tend to listen to pretty smart people.

What’s something that popular media gets wrong about math that just really ticks you off?
Oh, my gosh, I think even my husband could tell you the answer to this. There’s this episode of “Star Trek,” the original series, where they were talking about how much they were magnifying something. They were boosting an audio signal. One to the fourth power. Again, that’s just one. So that really gets me.
But it’s when people talk about the odds of something happening, versus the chances that something happens. When they say the odds are 50%, that’s not correct. The chance that something happens is 50%. But the odds of it happening would be one to one. But they aren’t the same thing. And a lot of times in media, especially on TV shows and things, they say odds when they mean chance, or they say chance when it’s the former.

If you could have dinner with three famous people from history, who would you choose?
Jesus. He just seems like he was a really cool guy and probably a lot of what was written about him was not accurate. He just seems to have embodied what it means to be a good human being, if you can believe the writings about him, and so I’d like to talk to him and find out.
It would be really interesting, although she just passed away last year, to sit and talk with Katherine Johnson, who was one of the women portrayed in Hidden Figures.
It’s about these three African American women who were working for NASA as, basically, human calculators. Just, what was it like to do all those calculations by hand? I mean, she just, I’m in awe of her.
I think for my last one, I’d go with Hypatia, who was a mathematician who lived in Alexandria, Egypt. Many consider her to be the first female mathematician, and she was brutally murdered because she was making waves for the Christians of the time who didn’t appreciate her as a philosopher and a mathematician, so they didn’t appreciate some of the things that she was talking about.
But she helped to make sure that certain mathematics was kept around. At the time, mathematics had to be sort of written or copied by mathematicians. They weren’t books that were being printed.