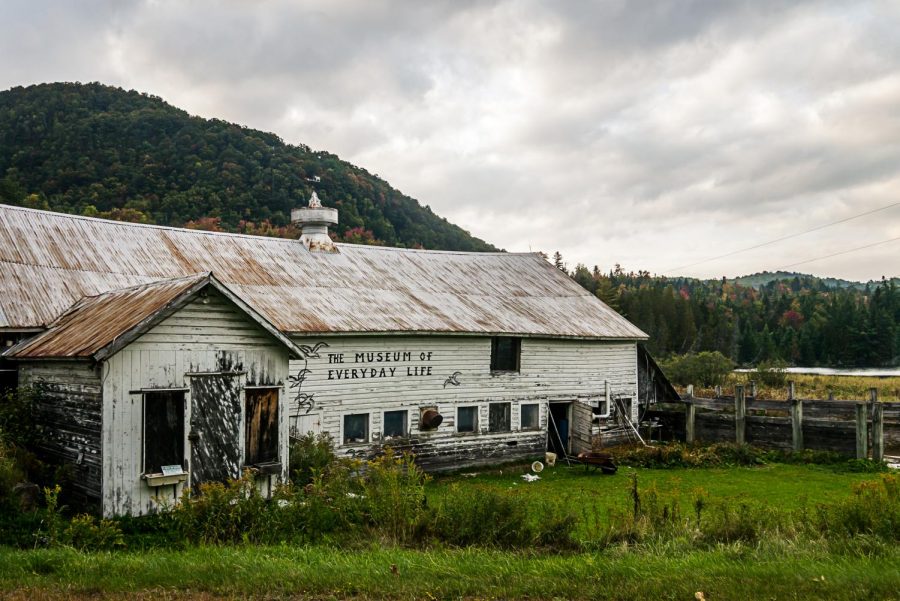 The Northeast Kingdom holds many hidden treasures swaddled within its rural vastness. It seems every back road and quaint town holds some oddity or boasts a font of the strange and beautiful.
In the town of Glover, there are many such places. The fabled Bread and Puppet theatre comes immediately to mind, as does Parker Pie, as good a pizza joint as you can find in northern Vermont.
However, one such place often escapes notice – or at least it did to me, a lifetime local. The Museum of Everyday life was not something I had heard of until I visited it one day while working for Circus Smirkus as a member of their travelling tour. A few of us went down to examine the old barn off Route 16, maybe five or six miles outside of Greensboro,
Vermont.
Admittedly, the place appeared run down, at least at first. The old barn was worn, the siding peeling and grey, and the slope of the roof was less than straight.
At first sight, it was a specimen much in line with the others of its kind that make their home in this part of the state, though this one sat on the banks of a large pond nestled in the valley that Route 16 runs through.
The only thing that distinguished it from the rest was the flag and the large, hand painted sign made of two sheets of heavy-duty paper above the entryway that named it The Museum of Everyday Life.
When I visited back then in the summer of 2014, the exhibit was on toothbrushes, and there was a delightful spread of artifacts and memorabilia based around that humble item that sits in most people’s bathrooms, a fixture we likely don’t even notice because of its sheer mundanity.
This is the entire purpose of the establishment, created in 2011 by Claire Dolan, who was once a member of Bread and Puppet, which is only a few miles up the road.
The mission statement on the website reads much to this effect, “[The Museum’s] mission is a heroic, slow-motion cataloguing of the quotidian–a detailed, theatrical expression of gratitude and love for the miniscule and unglamorous experience of daily life in all its forms. We celebrate mundanity, and the mysterious delight embedded in the banal but beloved objects we touch every day.”
Visiting this shrine to the humdrum is simple enough if you know where it is to begin with. Simply arrive and enjoy the exhibits on display free of charge, though donations are accepted at the door. The whole enterprise operates on the honor system, with the admission price set at what you are willing to part with at the door.
Even the space itself relies on the willing participation of visitors who are welcomed to turn on the lights and explore on their own, and upon leaving it is asked that the lights are shut off when the museum is empty.
The gallery is modest by a more contemporary museum’s standards, but that’s by design. The Museum of Everyday Life isn’t meant to be some dusty academic bastion where everything is hidden behind plates of glass and inaccessible to visitors. Here you can get close to the exhibits in a way that you wouldn’t be able to at some metropolitan repository.
Currently, the exhibit on display is called “Frayed Knot, the human art of tying and untying.” The write up for the exhibit goes into intricate detail about the knot as we know it, listing examples of its use throughout history, both as a means of fastening materials together physically, and a more metaphorical representation of a problem to be solved.
The online image gallery for this most recent exhibit won’t be up until the exhibit closes in July this year, but some of the previous exhibits have been archived on the website, and it was here I took a more recent virtual tour of a place I had visited those many years ago.
There are nine past exhibits catalogued, each with an introductory paragraph and opening picture. From the origin of scissors, to matches, to the safety pin, there was a varied selection of the mundane to examine, though unfortunately, all the links were broken and unusable as of press time.
The toothbrush exhibit was intact, however, and much of what I remembered when I last made my pilgrimage to the museum. There was a preface for the exhibit, and then a gallery of photographs from a large portion of the displays, each accompanied with a researched caption to explain the image.
I found myself revisiting the history of the toothbrush through the ages. One of my favorite highlights from the exhibit was of the mishawk, an implement used throughout the Islamic faith. This “toothbrush” was made from the Salvadora persica tree and was used in prescribed rituals of cleansing.
There are many such discoveries and tidbits of knowledge to be garnered here at the Museum of everyday life. For the small price of a donation and some courtesy with the lights, you yourself can be transported into a history of the seemingly mundane, though I found that my time proved to be more enlightening than was to be expected from poring over facts about toothbrushes.
Often, it’s the simple things in life that can bring us joy, and The Museum of Everyday Life delivers on that promise, one piece of normalcy at a time. Currently, the museum is open for ten or fewer persons at a time, and masks are required on the premises. Hours of operation are from 8 a.m. to 8 p.m. every day of the week.