It’s a quarantine kind of life 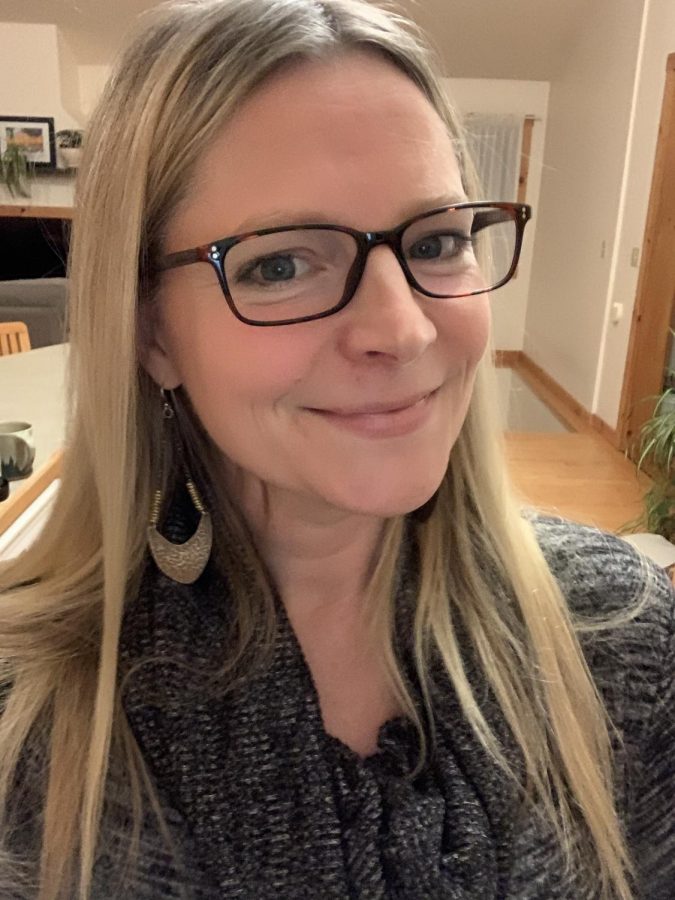 Sara Kinerson is the director of advising at NVU-Johnson and finds that quarantine living suits her. In her spare time, she knits, plays music and lives life regret-free.

What’s the one thing you can’t live without?
The first thing that pops to mind is chai tea. I have it every morning when I wake up, [but] probably I could live without it. There’s probably nothing I really couldn’t live without.

What’s your ideal Sunday?
I guess sleeping in a little bit and waking up to a clean kitchen and making chai, then maybe taking a walk, just like a nice day, and then creating something. I like to play music: piano, ukulele and guitar. Often, I’ll do something like that. But I also like painting, knitting and cooking. At the end of a Sunday, I want to have some relaxation and create something.

What’s your favorite song to play or that you’ve learned?
I have so many. I mostly play by ear. If I hear a song on the radio, and I feel inspired, I’ll just go sit down and start playing and figuring it out. I cycle through lots of songs throughout the month. One of my favorite songs I’ve ever heard is Gloria Gaynor’s “I Will Survive.” I recently made my own version of that on piano, only slower.

What are you most proud of?
I like to believe that I am a person who has helped people. I hope that’s true. I feel like in my career that I have the amazing opportunity to help students every year, and that makes me feel good to know, that even if one single student leaves NVU and remembers me 10 or 15 years later as someone who helped them walk across that stage to the next phase of their life, I would feel proud and honored.

What’s your biggest pet peeve?
There’s a couple things that come to mind. One is, I really dislike it when I go into a bathroom or public bathroom, [and it has] a paper towel dispenser that you have to advance so it leaves one for the next person. I always find myself a little bugged when I go to dry my hands, and I have to advance the towel myself. I wish someone had just done that before they left. I also cringe a little every time somebody tells me, “no worries.” I don’t know why.

What’s something you think everyone should know?
Probably my answer would change every month as I learned something new, but right now, I’m just really enjoying the concept of how you think about a situation can actually impact how the situation turns out. If you tell your brain that your life is good or that a situation is positive, your brain will start looking for information to support that. I just love how empowering that can be for people to just take a look at something that maybe is challenging for them and try to look at it through a different lens or positive lens, and what are the impacts that it can have on their life.

What’s the one thing you want to do after quarantine?
I’m a pretty introverted person, so this hasn’t actually been all that terrible for me. There were plenty of terrible things about this pandemic, I don’t mean to downplay it, but as far as the impact it had on my day-to-day experience, I’m pretty cool being home doing my thing. I’m not someone that goes out and eats out all the time. I haven’t had a huge change of quality of life. But I guess I’m excited for a lot of music, and I missed the Summer Music Series.

Who are three people from history you would like to have lunch with?
My grandmother, for sure. She passed away a long time ago, but we were very close, so she’s a definite top of the list. I would have lunch with my childhood dog. Maybe the third would be to have a good dinner party with all the people that I’ve known that have just passed away in my life. We can all be together for one lunch.

Is there one junk food snack in particular?
I really, really love bread and butter. That’s totally void of nutrition but so good. Gotta stay away from the bread. English muffins, you know, those are the things. I really enjoy them in the moment, and then afterwards I go, ‘why did I eat that?’ Usually I toast it, but if it’s a nice, soft, white bread and if I have some soft butter that’s like on the counter for a while, and it spreads well, I’ll go with untoasted.

What’s the best piece of advice you’ve ever received?
Nothing lasts forever. Appreciate the good times while they are happening. When faced with difficult times or situations, take comfort in knowing that they won’t last forever.

What’s the worst piece of advice you’ve ever gotten?
I can’t think of a specific time, but I know that I’ve had times in my life where I’ve been faced with challenging behavior, and someone else in my life, whether they’re a friend or somebody that I’m close with or a colleague. There have been times when those people have told me say to the person, ‘go to hell.’ I don’t think I’ve ever done that because that has not felt like good advice to me. I’ve always been more interested in trying to approach things kindly.

What kind of pizza would you be?
I would absolutely be a vegetable pizza.

What’s the one quarantine habit that you’ve picked up that you wish you hadn’t?
I feel like I’m pretty much living just like before, but maybe that goes back to the fact that my life hasn’t changed much because I’m not a super “go out all the time” kind of person.
I also was very germ conscious. I haven’t really developed any unconscious habits.
I’d be okay if we never shake hands again, or if everyone touches doorknobs with their sweater over their hands, that’d be okay with me.

Do you have a favorite Disney princess and if so, which one?
I like the whole Snow White story. So, I guess I’ll go with her.

If you were stranded somewhere for the rest of your life, but you got to pick where it was, where would you get yourself stranded?
I guess it would be somewhere near the ocean. It doesn’t need to be a tropical desert or a desert island or anything, but somewhere where I can enter the ocean easily, not literally on the ocean, but the edge of the ocean. Probably not like a tropical ocean. Those are fun to visit, but they get lots of hurricanes and tsunamis, and I don’t want to strand myself somewhere super dangerous. I feel like the Maine coast. I could get stranded somewhere around, maybe Portland, Maine.

What are the three or four things you would take with you?
Do humans count, or does my son not automatically count?

I’ll give you that one for free.
If there was internet access, I would bring my cell phone, to keep in touch with the outside world. And I could read, just, it would be my access to the outside world if I was stuck in this one place. I would bring all of my books. I have lots of books. Some of them I’ve read, some of them I’ll read someday, but that would give me a lot to do. Definitely my instruments. I would bring my knitting, yarn. I’d bring stuff that would fill my days creating and wouldn’t get boring.

If you have a bad day, what’s the first thing you are doing when you get home?
Probably have a shower, wash it all away.

Do you have a biggest regret?
I really don’t. I don’t allow myself to go there. I feel like every choice that I’ve made and every choice everyone makes in my life carries with it positives and negatives, and so sure there have been choices I’ve made that I wonder what would have happened if I chose the other option, but I don’t let myself go to regret, because it’s a useless emotion.

If you could be an animal for a day, which one would you pick?
Something that flies. Maybe a butterfly, like a monarch. That would be fun, because it’s just for a day, so don’t worry about the long term, and having a short lifespan. I could fly really far and see lots of different things. They seem free.

What would you want written on your tombstone?
I would want it to read that people felt cared for when they were around me, that the Earth was a better place when I left it than when I found it. That I did everything in my life with kindness.