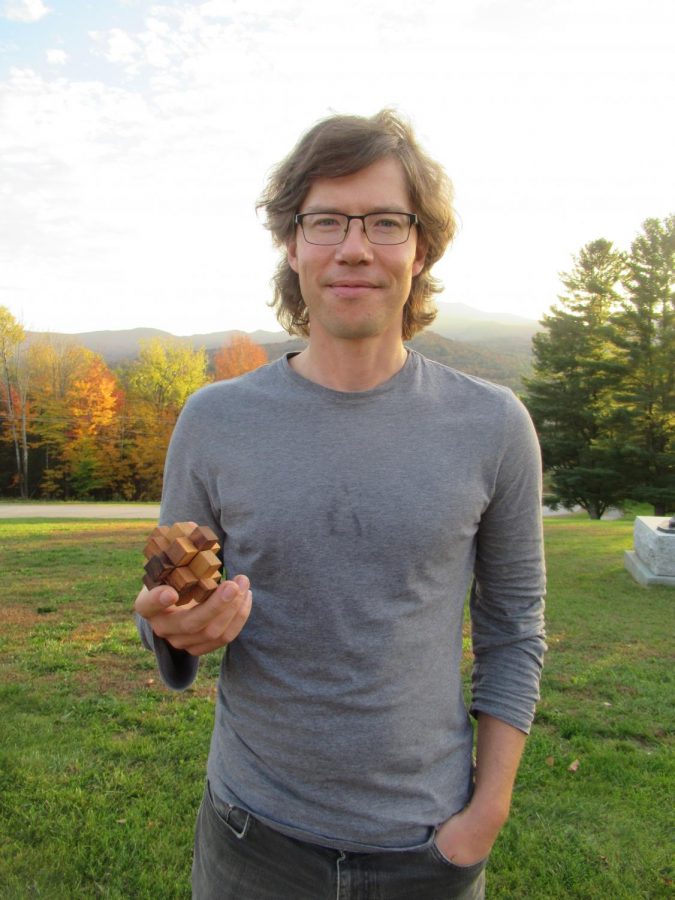 Greg Petrics is a professor of math and data science at NVU-Johnson. In addition to his interests in math, he also enjoys the outdoors whether it is hiking as many of the peaks in Vermont as possible, skiing or photographing the beauty of the world around him.

What is one quality about yourself that you would change?
Oh, good question. It’s kind of a weird question because, do you really want to change your qualities? I think probably exactly what I’m doing right now, which is over analyzing things, is kind of a quality. It’s good at times but, also sometimes people are like, ‘just stop.’ So probably… I would change it.

What is the most ridiculous thing you have ever done that you probably wouldn’t do again looking back?
Oh, I don’t know. This is a tough one, because it’s got to be in the newspaper. We’ll just do something fun. So, a few years ago I tried, and I succeeded, to hike all of Vermont’s 4000 footers in one day. There’s Killington, Mount Abraham, Mount Ellen, Camel’s Hump and Mount Mansfield… five of them.
I did hike them all in one day. It involved starting very, very early before the sunrise and finishing about at sunset on the longest day of the year in late June, I think it was 2019 or 2018. That was pretty crazy, and it was probably something I wouldn’t need to do again, but it was fun.

So, not one 24-hour period, but one day?
Well, I guess one 24-hour period. We started down at Killington, from the parking lot down there. We started around 3:30 in the morning, and we began hiking, and then we finished getting off Mount Mansfield at like eight o’clock at night. Yeah, so one day, less than 24 hours.

What is the biggest regret you have personally or professionally?
I don’t have a lot of professional regrets. I’m pretty happy with my job at NVU. I really like it. So, pretty happy with how things turned out in general. I guess it’s not really a regret, but it’s a regret for me. I’ve always been bummed about the way that NVU has been treated recently, but that’s not what you’re asking.

But it’s an answer that’s personal to you, and I think that qualifies.
I regret not doing more to avoid the berating that we’ve received.

Have you ever had a near-death experience in the pursuit of one of your hobbies?
No, I never have. It’s always been fairly controlled for me, but I’ve been around people who’ve had near death experiences, and that’s been pretty scary for me, actually really eye-opening.
When I was in high school, I was at the US National Ski race in Montana, and the former Olympic medalist Bill Johnson — he was the gold medalist in 1980 I think, in Sarajevo – and he was there at the race that I was at, trying to make a comeback, and he actually had a horrible crash.
It was pretty much the beginning of the end of his life, and I’ve never had a near death experience, but I was right about to go to the ski race after he had that accident, and that was really eye-opening to me to kind of realize how fragile the whole thing is.

Do you have a favorite story behind a photo you’ve taken?
Yeah, I do. On inauguration day for Trump. I’ll just keep my politics out of this.

Well, you’re welcome to share if you want to share.
I mean, it wasn’t a great day for me when he got inaugurated, and we decided to hike to the summit of Mount Mansfield because there were weather reports that there would be this cloud condition called undercast, which is when the mountains get above the clouds. Right now, it’s overcast, but that’s an undercast where the clouds are below you, and it’s generally really great.
So, we started hiking around five in the morning, and we got the top of the mountain around 6:30, which was sunrise time, and it worked out perfectly. We got a really nice photo from that day that ended up getting in a big magazine. So, I was happy about that. And it’s a pretty photo. 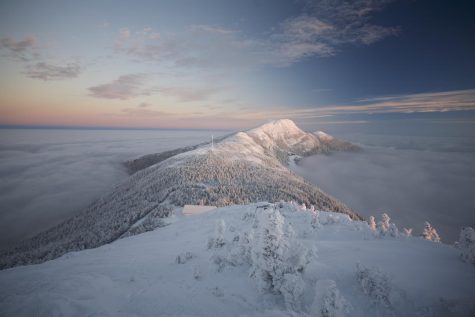 What kind of pizza would you be?
Plain cheese.

What is the worst thing someone has ever said about you?
I don’t know. The thing that bugs me the most that people say about me is when students [tell me], “Oh, you didn’t explain it well enough.” I’m trying so hard to explain stuff in class well enough and so it really is a little hurtful. I get what their perspective is, but I also understand that… they’re not understanding. I’m not in love with that.

What is a guilty pleasure of yours?
I’m a big cereal and whole milk fan. I’m not much of a cookie and cake guy, I don’t reach for that all the time, but I really like sugary cereals and whole milk. It has to be whole milk though.

So, what are the top two or three cereals that you would get then if you were going to go hard?
I’m going to go with Honey Bunches of Oats, which is a really good one. It’s not really that guilty.

I was going to say, that’s almost healthy.
Yeah, that’s actually kind of healthy, I guess. I do like Lucky Charms. Oh, I know what should go in here. It’s not cereal, but I really like Cheez-It crackers. All my students know that.

If you could meet five people from history for lunch and you could put them all in the same room together, living or dead, whom would you pick?
You got to go with Jesus Christ. That’s number one. I mean, I’m always fascinated by the peacemakers of history, so I feel like I’d want to call Gandhi to the table. Get those two people talking. George Washington would be an interesting person to bring to the table. I know, It’s like a greatest hits list.
There’s a woman named Ada Lovelace, who is one of the first computer programmers who I’d really be interested in getting to know. She supposedly was a very interesting person that we don’t really know much about, but she was one of the first people to really get involved in computer programming way before there were even computers, and she’s coming up with principles of computer programming.
I feel like history is missing her story, which is kind of common unfortunately in the sciences and math. I feel she needs to be heard from more than we even know from history.
I’ll stick with the science and math theme and go with Alan Turing as the last one. I just wish he could see what happened after he died. He left the world really miserably, and he was not treated well by this planet for his background. I think it would be good to bring him back to learn more about what he was really thinking and also to give him perspective about all the good that he offered up to us…to give him some closure.

What is your most prized possession?
I’m not really a possessions person to be honest. I went to a baseball game, and I got a baseball from Jacob de Graaff, who is one of my favorite baseball players. I get it’s valueless, it isn’t signed or anything, but I hold on to that. That’s kind of a cool.

What’s your biggest pet peeve?
People not listening to each other. That’s what it comes down to, talking past each other, not really is taking a moment to hear the other person saying.

What’s the best piece of advice you’ve ever received?
My advisor in grad school had these rules. I’d be challenged to remember all of them now, but they were all very good little witty truisms.
One of them that’s revealed lots to me is that your data is always in the wrong format. I think I’ll go with that just because it’s coming up all the time now as I do different work and I work with different people to accomplish different things.
What that means is… it’s not the right format to communicate to this [particular] group of people, or it’s not the right format to process in this data processing software, or it’s not the right format for you to even understand what it’s telling you.
It’s terse, but what it means is you do have to work hard to reformat information to be intelligible to yourself and others to do different things. That includes written language and not just Excel spreadsheets.

If you could change one thing about the world, what would you change?
I would just love it if people could live without stress, in many different ways. People are persecuting other people and the persecuted people are stressed out. It would be great to avoid that stress in everyone’s life in some way. And I guess that’s kind of like a World Peace thing. It’s never really that easy.