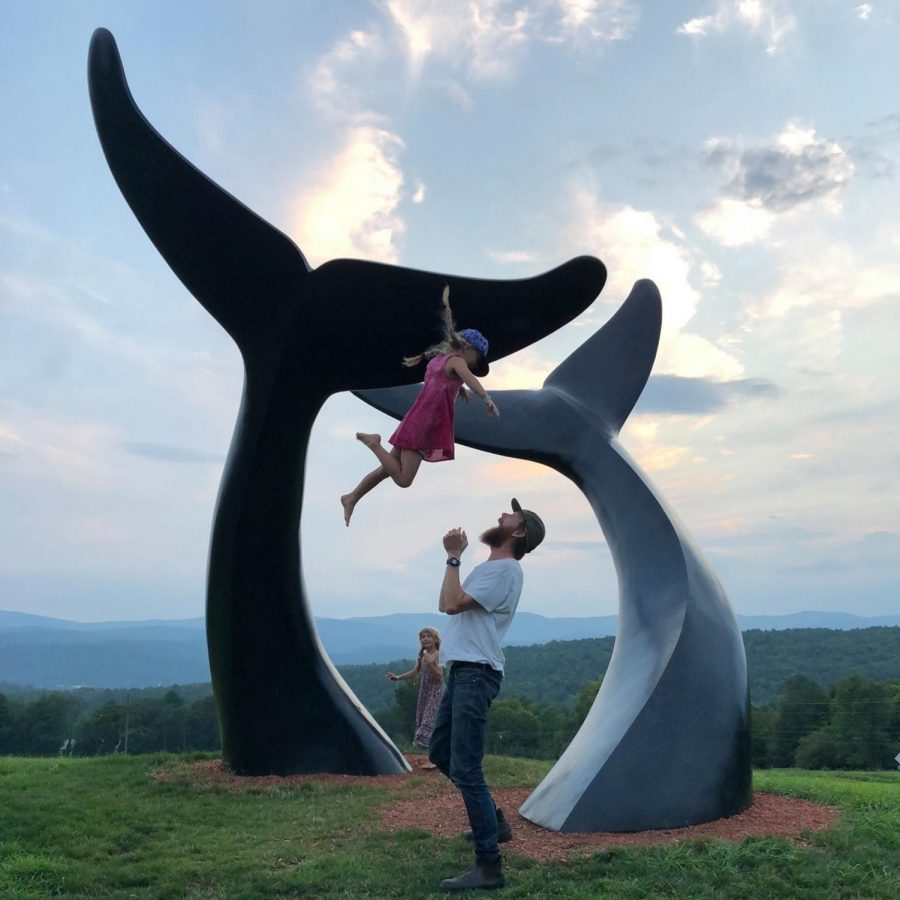 Isaac Eddy is the director of performing arts at NVU-Johnson. Before teaching here, he worked for 12 years as a member of the Blue Man Group, and his work has been featured in numerous publications, including the New Yorker and Time Magazine.

What was the most important thing you took away from your time with the Blue Man Group?
I think the most important thing I took away from the Blue Man Group is something that I’m trying to instill in our department here, which is art is made better when more people are in the room, and art is made better when there’s more perspectives being shared in real time.
The show was created by a person who was building the instruments, by someone who was thinking about the marketing and business side of, “what is it that we’re creating, how does it resonate with an audience, the stories that we’re telling.” Then another person was kind of a mastermind of the character itself and the point of view of the character and the music that the character played.
Then, they were smart enough to hire a whole bunch of other artists. The original drummer was primarily a visual artist, and he wasn’t a trained drummer. So, the sound that was a signature sound of the show has a really original sound, because he’s coming at it from a completely different perspective than the original instrument.
So, the more people that are in the room, coming from different disciplines, the more multifaceted the final product can be.

Have you ever had an epiphany?
Yeah, definitely. I feel like I have epiphanies almost every week, and that’s partly why I feel like I’m so lucky to have this job. It’s kind of like a no-duh concept, but… I remember when I first moved back here, and I was in my first semester teaching, it was really stressful.
I didn’t come from an academic background teaching in academia, you know what I mean? I came from the trenches of Performing Arts, and so to be thrown into this whole world was really daunting and stressful, but also at the same time, I’m like, “wait a minute, I get to learn for the rest of my career.”
To have that be baked into everyday existence means that I get to have epiphanies all the time. To stay curious and to stay open to having my mind blown, it’s such a privilege.

What led you to becoming a professor?
I did the Blue Man Group for 12-and-a-half years, and for half of that… I would come back to Vermont every single summer for two weeks to teach at the Governor’s Institute on the Arts. I was a student there, way back when I was in high school, and then I was also an RA there when I was in college.
Then I came back as a faculty member, and I taught improv comedy, experimental theater, visual storytelling, a whole bunch of other classes, but all based on performance and based on, “how can we tell stories differently, in new ways, to engage audiences?”
My two-weeks hiatus from the show every single summer made me realize that I loved that energy of teaching and of creating work with students, and that [process] being the art itself–the creation of the work with students and collaborating with them, not to be telling them what to do, but hearing their ideas–we all create it together.
That was as exciting for me as it was to performing every night for a paid audience off Broadway. So, I started to think, career post-Blue Man–do I want to pursue other acting gigs in New York or in LA? Or do I want to pursue arts education?
I realized that what I was kind of called to do was to pursue teaching theater in higher ed. So, I got my MFA in performance and interactive media art at Brooklyn College. Soon after I got my MFA, this job opened up here.

Have you ever been blown away by something you expected to be mediocre?
There was an art piece that my students devised–this was a while ago–that was based on their relationships with the concept of home. There was a moment in that piece–it was just a small-group, devised piece–but in that piece, there was one moment where they would all have their phones on, and their speaker was on, and if one of them spoke into one phone, it would reverberate to each phone.
So it was this weird game of literal telephone, like reverb telephone, where you would just speak, and it goes, “WA-WA-WA-WA-WA-WA.” It goes all through the Black Box Theater. It was really, really powerful.
Then this other moment in that piece, the students were standing in a square, and there was one student who was using their phone flashlight function to look for something on the ground. As the light cast on the legs of the other ensemble members, it looked like trees cast on the ground.
It was such a simple moment. It’s a lot like some of the moments with Blue Man, too, where sometimes, the simplest thing makes the most powerful impact.
Just in terms of lights, another moment is in a play that I directed here, Much Ado About Nothing. There is a moment where a character is holding two big flashlights. All they’re doing is holding the flashlights, but they swing their legs over as if it’s a motorcycle, and then they kicked–they mime Kick–and when they kick it, they turn on the lights and just rumbled off the stage. It was such a fun and beautiful moment.

Do you have any favorite pictures of yourself?
I have a whole bunch of photos of me chucking my kids really high in the air. I super love them, just because they look so happy, and they look like they’re just kind of stuck in the sky. It just makes me think how fun it is to be with them.

What is something you feel you are most passionate about?
As a teaching artist, I’m so passionate about learning from the works of others, while at the same time, integrating one’s own experience. I know there could be kind of pushback, like we are the “me generation” right?
It’s not about that; it’s about being able to process what you’re experiencing from your own identity and being aware of who you are and who that is in a space and in relationship to text and image. That’s just endlessly fascinating, and I feel like it’s a way–for us to be able to articulate that–is a way for us to get to come together.

Do you ever get stage fright?
Yeah, I get big time stage fright… I developed it when I was in elementary school. I played Puck in a Midsummer Night’s Dream. We did Midsummer Night’s Dream the Musical, and I had a solo, and I totally forgot the words in the solo. Since then, I was always like, “what if that happened to me again?”
You’ll hear this from a lot of actors, is that I actually rely on my stage fright to keep in the game and to keep focused. I really love improv, which, again is another performer thing, is the improv. For most people, it terrifies you, but to not have that reliance on pre-written text makes me feel way more comfortable performing on stage.
When I create characters myself… most often they are silent or semi-silent characters, much like the Blue Man Group. I love nonverbal storytelling and exploration of space and relationships. This is a long-winded answer to say that when I get to presenting text–memorized text–it’s still terrifying.

What’s the most fun you’ve ever had performing on the stage?
With Blue Man, there’s folks that were my best friends, and that I had been performing with for over 4000 shows. You could consider that as the most mind-numbing problem ever, you know–the same folks on stage doing the same show, but for me, it was such a joy.
There’s these moments that, doing the Blue Man Show, where it just–everything clicks, right? The audience is right there with you; the band is just fully synced in with what the Blue Men are doing. It’s fun, but there’s also this reverence for it too–this recognition that this is ephemeral, that this is only this one moment, and we’re experiencing it together.
To be able to have a few of those moments, this is what I’ve realized the older that I get–wisdom is recognizing the ephemera. When you’re younger, it’s just like, “this is so great!” meaning it will be great forever. It’s kind of bittersweet, but the recognition that it won’t be forever, so to try to experience it in real time and also recognize that it’s just a moment, I have found I’ve taken great pleasure in.

Did you always know you wanted to be a performer of some kind?
I’ve always, always loved performance. I used to do mini performances for my family, and I remember seeing music videos when I was young, and then I tried to copy some of the moves.
I loved doing theater in high school; it was a huge part of my identity. I just loved the community that was created in that, especially the community created with the audience. That’s something that all of us have missed so much in the first year, the first 12 months of the pandemic, just to not have that live community.
I just love connecting with people. I love the mini communities, like insta-communities–that interactivity that happens with a conversation, that happens in the classroom, that happens in building a show, that happens in presenting a show or gallery. That is what I live for.