It’s all about the process 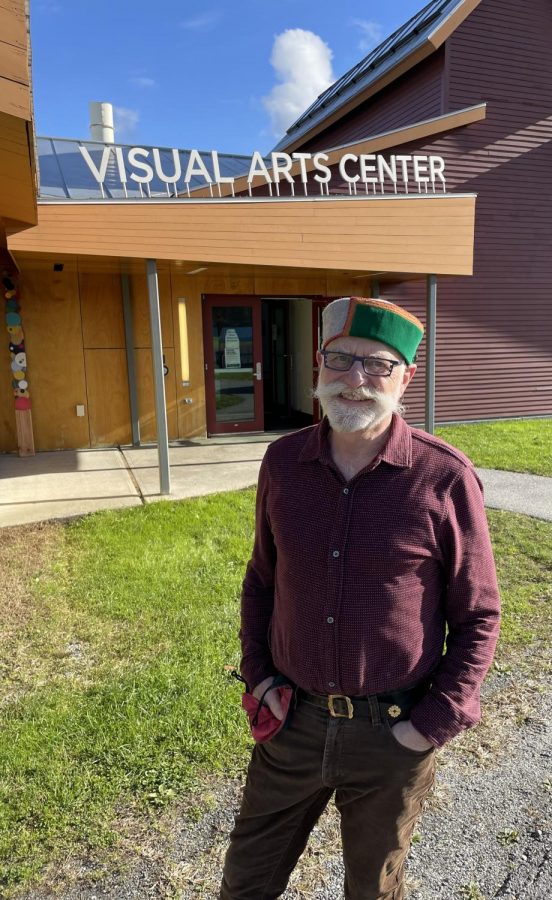 Professor of Fine Arts Ken Leslie is a bit shy of six feet tall and somewhat resembles a Christmas elf with a pair of soft emerald eyes peeking out from rectangular-framed glasses. His skin is aged, and he sports a white handlebar moustache with a trimmed beard below his familiar toothy grin: a portrait of the artist, by now well seasoned.
Leslie never intended to become an artist. It was, he admits, somewhat of an accident, something unplanned.
He was headed elsewhere, looking ahead, perhaps to a career in science.
Attending Amherst College as a biology major, he took his first art class as a junior.
That’s when things went in an entirely new direction.
“I took a sculpture class as a junior, and then jumped into everything as a senior,” Leslie said. “Suddenly, I was speaking my own language. I did have friends who told me I was much too old to start art. ‘It was a mistake,’ they told me, but I did it anyway.”
He followed his passion and went to New York’s School of Visual Fine Arts as well as the Skowhegan School of Painting and Sculpture in Maine.
He attended the University of Pennsylvania, where he earned his graduate degree in painting in 1980. By 1984, he landed a professor gig at Johnson State College and has been at the Johnson campus ever since.
Leslie’s inspiration to become a teacher stemmed from his mother, who was a high school biology teacher.
Being a professor has enabled him to financially support his art career by combining two things he loves; however, Leslie soon found balancing two careers has been no easy task.
“I’m physically burnt out sometimes. I work in my studio pretty much every day when I get home, and it’s an important part of the everyday for sure,” he said.
During the day he is always working or crafting an idea either on paper or in his brain, which he says allows him to maintain his stamina in the classroom and in his studio.
“I was working on a piece last night,” Leslie said. “It’s in my head now. And so while I’m driving in and thinking about it, even if I only get 10 minutes to work on something, if I do that, it keeps it in my head.”
His art is unusual for a number of reasons, beginning with shape; he often paints on doughnut-shaped canvases, sometimes folded to create his art books. As befitting a Vermont painter, he has chosen the road less traveled.
“I had started doing circular paintings, because I found that really refreshing,” he said. “Because 95% of all artwork is a rectangle, right? So suddenly you do a circle, and it’s a very different ballgame.”
Also unusual is Leslie’s choice of where he paints. His main muse has been the Arctic and its strange seasonal patterns. He has painted various books on site very far North on or above the Arctic Circle. He has painted in Alaska, Nunavut, Svalbard, Greenland, Iceland, Norway and Finland.
These paintings are the ones that are turned into books, and he paints one page per hour for 24 hours. He completes his arctic paintings in water color, because they make traveling significantly easier as some countries ban or only allow a small amount of acrylic or oil paint on flights.
Leslie does two versions of each place: one in the summer when the sun doesn’t set and one in the winter when it doesn’t rise. These accordion-like books can be viewed two pages at a time or completely unfolded to reveal the entire painting.
The winter books are a collection of cool auroras across the night sky filled with stars against pitch black or dark blue.
The summer pages are brighter, illuminating the trees and surrounding landscape against the cool tones of the sky.

In love with the arctic, Leslie nevertheless found its seasonal patterns difficult to adjust to. That adjustment, he says, was neither automatic nor intuitive.
“Adjusting is something you have to do deliberately,” he said. “One of the ways I did it was to not turn the lights on in the house. If I kept it dark in the house, I could look out the windows and see perfectly well. So for painting, I just lived in the dark, I kept a candle or two going just so that I could make sure I was using red paint instead of green.
“I was living life the way people lived for hundreds of years, instead of now where we just flip on the light all the time. For me, the most difficult time was in the summer where the sun doesn’t set and it’s like the party never ends and you’re exhausted.”
Leslie says the process of creating is for him more important than the result. He follows his ideas and allows them to carry him to the final product, “You get a really weird idea, and I don’t know what the end of the idea looks like. I only know what the beginning is, but it has a certain feeling, like I got to do this,” Leslie said.
His art is often a constant in his thoughts, allowing him to further sculpt an image until he has time to put it on paper.
In this respect, Leslie’s brain is always crowded, always full of ideas and always imagining a new project he wants to explore.
“Sometimes I might lose interest in something,” he said. “That’s because I’m more interested in something else. I’ve got a huge list of things I want to get to, and I always have a whole lot of things going on at the same time, so I can work on whatever I’m really interested in, kind of pick and choose at the time.”
Even if Leslie could go back in time and give his 20-year-old self some advice, the seasoned artist said he wouldn’t presume to do so. It would, he said, hinder his growth as a human being and an artist, because he wouldn’t have made the mistakes necessary for his success at this point.
For Leslie, the basis of all art is creative thinking, something that he emphasizes is applicable to all disciplines.
“We’re talking about … me being an artist, but I’m sure if I had become a biologist, I don’t know if that would have been [all] that different. I would have been lying there in bed and suddenly gotten some idea about a DNA molecule, and [then] I’d be off and running with some bit of research to see if that’s the case.”