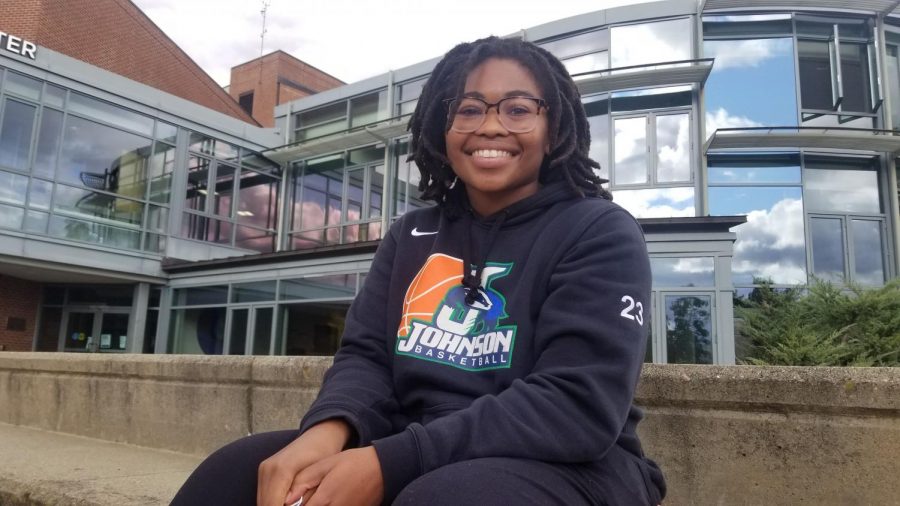 Devyn Thompson is a third-year student at NVU-Johnson. She is a Secondary Education major and loves working in the classroom. Her least favorite Teletubby is Dipsy, the green one.

What is the one thing you think you were born to do?
Honestly, the one thing in life I feel like I was born to do is help others whatever way possible. Even ask my birth parents. I was on the floor playing teacher when I was three years old.
I’ve always just been so confused about our education system as a country, and I’ve always despised it, even at a young age, and I wasn’t able to really process why things were what they were. So, I feel like one of the things I was put on this earth to do is make an impact in the educational system.

What’s the thing that surprises people the most about you?
That I’m really down to earth. I’ve been told that I can come across as intimidating. I think with my many leadership roles and how I carry myself to the outside eye, I can seem high-maintenance or intimidating. Then, once people actually talk to me, they realize I’m just a goofy person.
I’m the most laid-back person you will ever meet; I just like being straight to the point, and I don’t really think most things are as big as we make them. I’m just 20 at the end of the day.
When I’m in all these meetings and stuff, I have to change myself, act older than what I am or act like I’m more mature than how I really am. But once the Zoom is off and I’m outside the classroom, I’m just a goofy 20-year-old.

What kind of Pizza would you be and why?
Buffalo chicken pizza, because it’s buffalo chicken and pizza put into one food, and I’m spicy.

If you could change one thing about yourself, what would you change?
I’d be indestructible. Like, unbreakable bones. Bulletproof. I’d be bulletproof. Ain’t nobody assassinating me.

What’s the one thing about yourself that you were the proudest of?
Honestly? Publishing my book. Publishing my book, because, for one, I couldn’t even get a publishing company to pick it up, which was very frustrating. So, the fact that I just said fuck it and I published it myself, and it did good? That’s what I’m most proud of.

What piece of advice would you give to your younger self?
Speak your mind. No matter if it’s good or bad. You can’t be afraid to hurt somebody’s feelings. And I only say that, because when I was younger, I wasn’t firm on my own personal boundaries and a lot of people crossed those boundaries, which I was setting up myself.
I wasn’t protecting myself like I should have. So, I should have been vocal about what I wanted from others and what I needed from the relationships that I was in. The reason why I wasn’t confrontational when I was younger is because I would have much rather seen others be happy versus not having them at all.
So now, I would rather have company that respects me than company that’s just there. I noticed the more I’ve learned to set boundaries, some people are fine with it, and some aren’t, and whoever isn’t, I’m saying hit the road.

What’s something you love to do, but you don’t do enough of?
Relax. Just kick back, watch TV, listen to music. You know, just relax.

I kind of want to know what you wouldn’t do, but I don’t know if we could put that in the paper.
I wouldn’t kill anybody.

What’s the weirdest thing you’re into?
Stocks. It’s kind of funny. I got into stocks once COVID hit. Nothing was guaranteed anymore, jobs or anything, and it started off as a little side hustle, and then I learned how it works. Now I’m very interested in it. I’ll give you a perfect example.
You know who Elon Musk is, right? So, tell me why all he did was put out a tweet — all this man did was speak — and Bitcoin dropped, and I was like, “what is that?” The amount of influence you have to have just to send out a tweet and make a whole market drop. It’s crazy how that works.
Ever since then, I was just like, “what influences these numbers?” It’s very interesting, because it’s all a game to me, and I think once I learned how much stocks are really just a game, I started looking at money differently. My money management actually improved the more I started to understand stocks and credit and stuff. They don’t teach you that in schools.

Is a Pop-tart a calzone?
No, it’s not a calzone, because calzones have cheese, and a Pop-tart is like a pastry.

What’s your biggest pet peeve?
When people don’t listen. I hate repeating myself, and I hate when I tell someone something, and I know what I’m talking about, but they don’t listen, and then they have to find out the hard way. I feel like I’m the type of person [where] I always speak from the heart. I try to speak from the heart, so if I have a genuine concern or need to tell you something, take it into consideration. Yeah, I hate it when people don’t listen to me, especially if I know what I’m talking about.

What’s the one thing you can’t live without?
Water.

Just water? Like, plain water?
Water, water, water. Just straight up water. Morning, day and night. I have a case of water by my bed. Drink water!

If you have a band, what would you call it and what kind of music would you play?
If I had a band, we would play R&B and jazz and our name would be The Cortex Lounge. That name actually originates from my best friend back home, Jared Hagler. He did the photographs from my book, and he’s a professional photographer, and his studio is called The Cortex Lounge. So, of course, I’d have to buy the property for that, but I would name it after Jared’s studio.

If you were a superhero, would you wear your underwear on the inside or the outside?
Inside.

Who is someone you would want to spend a day with from history?
Malcolm X and Assata Shakur. To be honest, it’s hard being the leader of COMS. It’s not just here, it’s the whole Black community. We could all get the rights we want if we were all on the same page. I hate it when I’m advocating for Black liberation and an equal system, and the first backlash I get is “Oh, what about Black on Black crime?”
What does that have to do with anything? It’s equally wrong, but that’s not the issue. I’m talking about the fact that you have white people in leadership, systemic leadership roles, police officers, doctors, judges, etc., that are purposely killing us. Black on Black crime, that’s a problem, but that doesn’t go anywhere in the systemic racism that I’m referring to.
It’s just frustrating, because I just look at it like we’re not each other’s enemies here. The bigger picture is the systemic enemy. So, it was frustrating, and I know that this unity within the Black community has always been a thing. It’s nothing new, and that’s why I want to sit down and talk to Malcolm X and Assata Shakur because I want to know how they were able to unite so many Black people to a common cause, and I still don’t know how they did it to this day.
Malcolm X practically had an army of Black liberators. The Black Panthers created a system to help people. They had branches across the country, and I want something like that. I want to see Black people come together like that again.
It’s frustrating because I feel like we could get so much further if we all just collected and came together for our communities and for each other. I wonder how they did it, because they brought so many people together, and I don’t know how. I don’t have that skill.

What is your most prized possession?
It’s actually hanging up on the wall. My freshman year, Mamadou was taking an art class here, and one of the assignments was painting endangered species. He did a portrait of three polar bears. You can see the background of the mountains and snow. He took his time.
When he passed, I actually went over to the Art Department last year to get his work, and they told me they didn’t have anything. Then — it’s crazy — this year, a couple of weeks ago, one of the teachers in trio reached out to me, and she had his polar bear painting.
That’s my most prized possession, because I feel like he was taken from me, you know? Now I have something, because I was in the room when he was painting it. I vividly remember him doing it and taking his time.