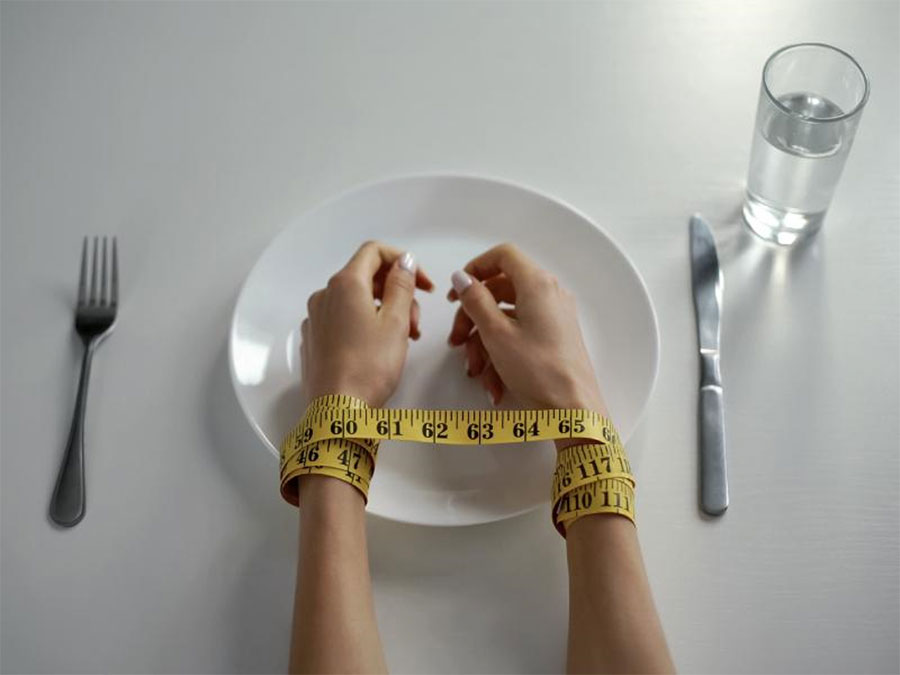 As an athlete, teens like Adelle MacDowell, a runner who lives in Johnson, are more susceptible to eating disorders at a young age.

“My eating disorder actually didn’t start with sports,” says MacDowell. “For me, it was very much about body image.”

She says that her eating disorder began her freshman year of high school, and has been something she’s struggled with since.

“In the beginning of the pandemic in March, I started going on runs. At first, the running was really healthy. It was a good thing for me to get out, get away from my family, and I was enjoying it. So that wasn’t really tied to my eating disorder yet.”

During that time, though, she says she was still restricting a lot, but hadn’t yet connected the eating practices with her workouts. Then she realized how much faster she’d gotten. “Instead of being like, ‘oh, I’ve improved because I was running so much over the spring,’ I was like, ‘I’m so much faster now that I’m skinnier,’ and I sort of kept that in mind and continued to restrict throughout the summer and the fall. That’s when my relationship with running really connected. It turned toxic and it became inseparable from my eating disorder.”

When she suffered a stress-related injury, she was unable to keep up her regiment of running. While it was never officially diagnosed, she’s pretty sure it was because she wasn’t eating enough to support the amount of training she was doing.

Injuries like this are not uncommon when it comes to eating disorders. “Girls with anorexia may be less likely to reach peak bone density, and therefore may be at increased risk for osteoporosis and fractures throughout life,” says the National Resource Center for Bone Diseases. It’s an issue that athletes are especially prone to, doing a high impact sport with bones that aren’t strong enough to handle the pressure they’re being put under.

Being unable to run, MacDowell’s mental health spiraled. She worried about not burning as many calories, since she was unable to run, and that’s when she said the eating disorder and running really clicked into place.

MacDowell is just one of many who struggle with eating disorders. While people from any walk of life are at risk, female athletes are some of the most impacted. In a recent study by National Eating Disorder Association (NEDA), more than 1 in 3 female athletes reported symptoms that put them at risk for anorexia. This prevalence of behaviors can lead to unhealthy eating habits being normalized on a team and for these actions to almost become contagious.

“It’s especially hard if lots of people are struggling,” says Mae Searles, a high school runner from Lamoille County. “Because then it’s just so easy to feed off of each other, which makes it worse, and it just becomes a really negative cycle.”

Another runner says that self-deprecating comments can unintentionally have a negative impact on a team. “When people would say, ‘Oh, I ate so much, I have to work it off during this workout,’ or, ‘I’m glad we have a long run today because I ate so much at lunch,’ that can really get in your head,” they said.

MacDowell recounts her own experience with this. “I had a teammate who I was close with and we sort of perpetuated each other’s struggles with eating without really knowing it.” She says that she and her friend would often remind each other to avoid certain foods, not to over eat, or to make sure they got in a workout to burn off the calories they consumed, which really prolonged the issue.

But pressure doesn’t always come from teammates. Coaches and sponsors can also play a role in exacerbating an eating disorder. Mary Cain, arguably the fastest runner in the USA at just 17 years old, partnered with Nike in 2013. Little did she know she was joining a dangerous team.

She was constantly told to lose weight, to the extent that she developed osteoporosis and was at risk for infertility. “I felt so scared,” she said in an Op-Ed by New York Times. “I felt so alone. And I felt so trapped. And I started to have suicidal thoughts.”

When this story came to light, her coach was put under review, and as other allegations against him came out, he was eventually banned from coaching for life.

Other star athletes develop eating disorders even without outside stressors. America’s current cross country skiing star, Jessie Diggins, has been very open about her experiences with an eating disorder. In her book, “Brave Enough,” she explains how in her senior year of high school, the stressors in her life built up until she felt out of control. Losing weight and being “skinny” felt like the only thing she could do.

These are just two of countless stories of professional athletes who have struggled or are still struggling with eating disorders. While many praise them for being open and honest instead of hiding it away in the shadows, others worry that bringing eating disorders to light will unintentionally glamorize them.

One skier said that her coach was actually not a huge fan of Diggins for this reason, and worries that other athletes will misinterpret Diggins’ message and develop eating disorders of their own.

Movies involving eating disorders also get mixed reviews. “To the Bone,” a Netflix movie about a girl struggling with anorexia, has been criticized for this very reason, after many people cited it as a way to learn new “tricks’’ to avoid eating. A show on Netflix about a male ballerina with bulima, titled “Tiny Pretty Things,” has been criticized for a similar reason.

At the end of the day, whether or not the newfound awareness is feeding into the issue, it’s undeniable that eating disorders are commonplace. Every college team I, as a female athlete, visited, I heard stories about one or more athletes who had suffered from a diagnosed eating disorder. Every high school team I was on, one or several of my teammates were struggling.

Here at NVU, eating disorders are not abnormal. “I don’t have data in front of me right now, but I think it almost comes up with most of the people we talk to, in some way.” says Kate McCarthy, a member of the Wellness Center staff. “ I think it’s just really, really common in society in general, and in the age group that we have on a college campus, specifically.”

She goes on to explain why this is. “For a lot of folks coming to college, it might be their first time being in an environment where they are actually in control of their food, so that might present an opportunity to restrict or binge or just explore that relationship,” McCarthy says. “The opportunity is just there.”

National data backs up this assertion. “The increased pressure and stress of school and leaving home may lead to mental health problems among college students and a greater need for campus services,” states NEDA. “This is also a period of development in which disordered eating is likely to arise, resurface, or worsen for many young men and women. Full-blown eating disorders typically begin between 18 and 21 years of age.”

After several surveys, NEDA added that athletes were particularly at risk. McCarthy says that this is because there can be pressure to perform at a certain level. “Sometimes, we might think ‘Oh, if my body weight was lower, I could perform better.’ If you’re an athlete, you probably know that that’s actually not going to be very helpful. You need food to perform. But sometimes our brains get a little mixed up,” she concludes. Student-athletes make up a large percent of the on-campus population at NVU, which may be part of the reason disordered eating is so pervasive on campus. She adds that eating disorders are certainly not restricted to only athletes, and on a college campus, you’re likely to see it throughout the population.

Luckily, you can seek help, and many people do recover. After her recent trip to Beijing, which included two Olympic medals to add to her collection, Diggins shares, “I wanted to address the most important takeaway for me from the Olympics, because it’s the one I would have needed to hear when I was 18. I was only able to get to those start lines because I was healthy, happy, and have a loving and supportive team around me. Listening to my body and taking good care of it isn’t something I’ve always done, but getting help for my eating disorder and learning to accept my strengths instead of always trying to be ‘perfect’ is why I’m still racing today.”

Here in Johnson, MacDowell’s relationship with running is also on the road to recovery. “Yesterday, I went for my first run in months,” she says. “It was a really easy run, and it was so beautiful out. And then I realized after the run that I hadn’t been thinking about my pace and burning calories. It hadn’t even been part of my plan for the day. I was just running because I felt like running.”