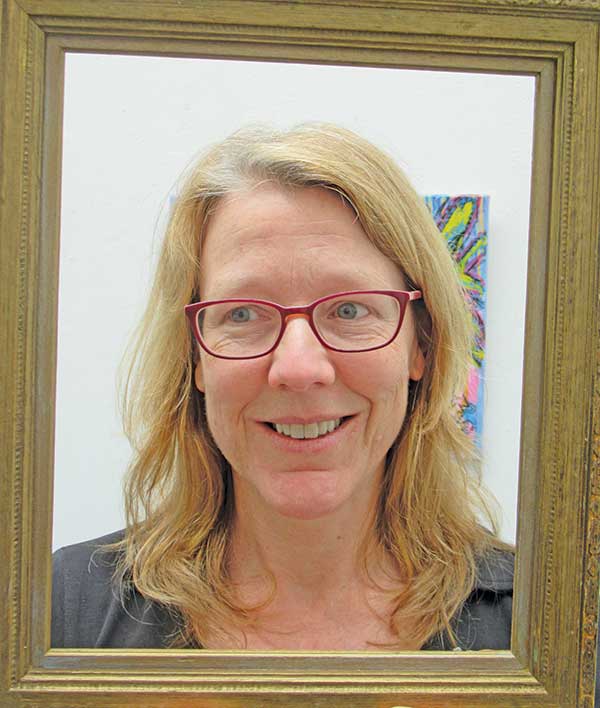 What is your first vivid memory of experiencing art as something bigger than just a picture?

When I was a small child, my parents worked in Germany, and I remember seeing Van Gogh’s sunflower painting and just being blown away. This is more than just a simple image; there’s angst and emotion and life and figure and everything in that painting. And he puts so much paint on the canvas. It was really cool to see it in person because you could see how thick the paint was when you looked sideways.

What is one piece of advice that you would give to students who are interested in your field?

Work hard and be persistent. If you apply for something and it doesn’t work out, keep applying. Keep trying, keep going, don’t quit.

How did you decide on African art for your dissertation?

I was interested in legal issues in the art world, and I remember taking an art law class and we spent a lot of time on the Parthenon Marbles, the Greek sculptures that are now in London, and how horrific that is. They should be back in Greece. And I remember thinking, ‘Well, I know that there’s a lot of African art that was taken by colonialism, nobody’s talking about it, and I can’t even read anything about it.’ So that sort of surprised me, because part of finding a doctoral dissertation topic is to find something that nobody has done. It just blew my mind that nobody has done it. And with African art, it’s not just something to look at. It’s something that has purpose. It’s not just an object. It’s also a verb, if you will. We talk about art as a verb.

What is your proudest accomplishment?

My first professional accomplishment was probably getting some paintings that were taken during World War II reunited with the descendants of the original owners. That was pretty cool. I was a young graduate student at that time, but that stuck in my head as really cool. As for a personal accomplishment, I used to do powerlifting, and when I broke my personal record in bench, I was really excited.

What brought you to Johnson?

I saw an ad for a job and applied for it. And here I am 18 years later. I’d never really been to New England before. It’s cool though, I like living here.

What is your favorite way to eat pasta?

What is one thing that you think everyone should do if they can?

Definitely make art. I mean that in that in a broader sense, not just visual or fine arts, but performing, creative writing, music, etc. Definitely do something artistic that just soothes the soul.

What is the best thing that anyone has ever said about you?

I don’t know if this applies or not. But when I was little and I was getting teased in school, I would go home, and I would be in tears. My dad …would sing Billy Joel’s “I Love You Just The Way You Are” every night until I got over it.

What three people dead or alive would you most like to have over for dinner and why?

The first one would be Rose Valland, who was a French Resistance spy. She was an art historian, and she was a small, middle-aged woman who nobody took seriously. She applied for a job as a secretary for the Nazis in Paris in World War II and got it. Because of her, thousands of works of art were traced from Nazi art theft and brought back to where they were. She was the person writing where things are going, and she’d bring the writing home and copy it at night. Nobody ever caught on to what she was doing. My second person would be Lucille Ball. She was so funny, and I hear lots of funny stories about her, like at dinner parties, and laughing while eating is good. Then Hatshepsut, someone from way long ago. She was a female Pharaoh in Egypt. That was my undergraduate thesis research project. They were excavating her temple in Egypt, and I would go to the library and read the latest archaeological news because it wasn’t online. She was this brilliant diplomat who made diplomatic ties with the Cushites in the Ethiopia-Eritrea area, and did it without war

Do you have any guilty pleasures?

Red hot blues. They’re blue tortilla chips with spice on them. And reading escapist literature that has nothing to do with my field.

What would your tombstone read?

Mary Martin, human. When you’re going for walks and you come across cemeteries, it’s interesting what people write on them. Mother, father, etc.

What Disney character do you most relate to?

The little goofy kid from “Up, Russell.” He’s persistent and upbeat and he might not get everything but he’s just full throttles forward. I can appreciate that.

What is the best advice that you’ve ever received?

My dad always said work hard, but don’t work so hard that you forget to have fun. I can be that way, again relating to the kid who’s just a steamroller. That was good advice for me to take time to enjoy life.

My high school English teacher told me I shouldn’t bother applying to college. That I wouldn’t get in anywhere, that school wasn’t my thing. Now I have more degrees than he does. Never try to discourage someone from doing something they really want.

What is your biggest pet peeve?

Fake sweetness. You know when it’s genuine and when it isn’t. You can be charming and it comes from a real place, or you can try to be sweet to manipulate.

What part of German culture or day-to-day life do you think Americans should adapt?

What I remember about going to school in Germany is we took breaks to play “futball.” It was like work hard/play hard. The four o’clock snack break is a great one, too.

What is one thing that you cannot live without?

My survivalist instinct would say water. Oh I know, a notebook. I like jotting stuff down. I mean, computers and phones are great, but there’s something about writing with pen on paper. The action of it helps my thought process.

If you have a bad day, what’s the first thing you do when you go home?

Take a bath. We were impacted by Hurricane Irene. Our house was 90% gone. We found this old clawfoot tub, and I just love it. There’s a skylight above it. And it’s so nice and long that you’re not crunched up. You can just sit and look up at the stars.

What made you shift from theater to art history?

I loved all the arts. I also minored in English and music history. I had a double minor as well. I knew somehow, I had to be involved in the arts, but I wasn’t quite sure how. And in graduate school, I thought about doing lighting design for theater, but in the end I went to school for art history, but I still love all of it. I got a grant to study art in Europe, touring around studying art. But I also got to see a lot of great theater at night, because you know museums are open during the day and theaters are open at night. Art historians travel for a living. That is awesome.

What is the single thing that you are most passionate about?

What is your most prized possession?

That would change daily based on my mood. I would say Johnny Cash, The Kinks, and Janis Joplin.

Tell me about your powerlifting.

Powerlifting is a sport that’s done in age groups as well as weight classes. You can do bench-press, squatting, deadlifting, and overhead press. I was in the older, smaller person category. I’ve always been into moving and sports and all of that, just getting my energy out in a physical way. I’ve always done weightlifting in some way. I played soccer, I did swimming in high school. I’ve just always been into sports. History books are big, you have to lift them!

What is the strangest thing you’ve learned in your studies?

There was a show in the Brooklyn Museum of Art that was censored by Rudy Giuliani. He tried to block it as being anti-Catholic sentiment by turning off the lights, saying that the city of New York will no longer pay for their power if they keep that show up. And the strangest thing I found out about it was that he never even saw any of the art. I thought that was very weird. Wouldn’t you want to know what you’re censoring? Are you just going by somebody who was offended, so you shut the power off? I just thought that that was really weird. It was a definite incident of racism on his part. The first year he tried it, it was a Nigerian-British painter named Chris Ofili, who did an African version of the Virgin Mary. He used a wide variety of materials that may or may not have offended some people. The artist was Catholic. The second one was a Jamaican photographer who does these amazing photographic portraits of herself as Jesus. Her name was Renee Cox and she did one called Yo Mama’s Last Supper where she’s Jesus at the Last Supper, and she’s standing nude. The only white guy there was Judas. Again, Giuliani never saw the picture and he never even asked if she was Catholic.