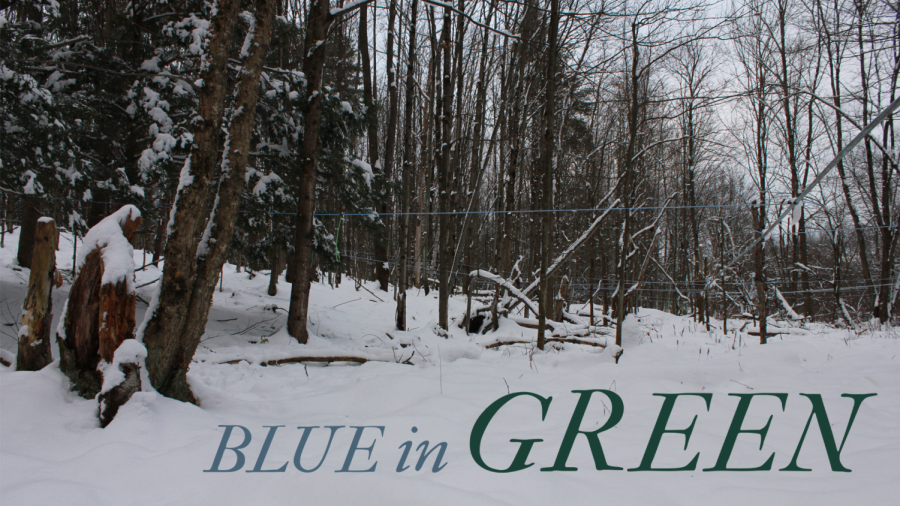 “Blue in Green” follows dual storylines of Vermonters and the impact of substance abuse on their lives. Benay, who wrote, produced and played a lead role in the film, now resides in New York City but is still very much rooted in his home state.

The first film in the series is titled “Pomeroy,” a short considerably smaller in scope than “Blue in Green.” Benay, a film student graduate of Middlebury College, tapped into all his resources to get this second installment off the ground.

“I never really directed anything before,” Benay said, “so I was kind of overwhelmed by the scope of ‘Blue in Green.’ I knew that my friend and former classmate, Hannah Marks, would have way more experience than me.

“I trusted her so fully because she was just awesome on ‘Pomeroy’ as the director of photography. So, I reached out to her to see if she would be interested in directing. She was, and it was a really good choice because she just did an amazing job directing this film.”

Benay was able to use the resources of the Middlebury College film department to create both films in the series during times when active students were on academic breaks.

“I can’t possibly express enough of my gratitude, for not just the first one but then to go back to them and say, ‘hey can we do this again?’ It was really an incredible opportunity,” Benay said.

“Blue in Green” is set in a bleak winter landscape that many Vermonters know all too well. Even bleaker and growing more familiar is the runaway opioid epidemic that has afflicted the Green Mountain State in recent history.

“It was going to be kind of two interweaving stories,” Benay said. “One was based on a real story from Vermont of a couple stealing car parts to pay for a heroin addiction. But then interweaving that with a story about someone who was more affluent, because I think there’s an interesting socio-economic diversity in Vermont, that particularly I think shows itself when it comes to social issues … Obviously the mind right now goes to people who are suffering from addiction and exhibiting substance abuse with opioids, but a major thing that’s been around longer than this epidemic is alcohol abuse.”

Most millennial Vermonters could tell you a story or two about a friend, family member or acquaintance who suffers or has suffered from opioid addiction and abuse. Benay sees connections between his fellow Vermonters and is able to cast a wide net that relates to any viewer of his new film.

“I was clinically diagnosed with obsessive compulsive disorder when I was nine years old,” Benay said. “When going back so far and trying to understand my own compulsive nature, I kind of realized the connection there. I think that addiction is a more relatable thing.

“As I got older, I realized that nobody’s perfect: you don’t have to have a mental health diagnosis to have problems and the relationship that substances have with those problems. I’m not somebody who thinks that substance use is all bad, but I do think it’s something that can pretty easily exacerbate your problems. That was what I realized with the stories that I wanted to tell.”

Benay wanted to show how abuse comes in many forms, some obvious and others less so.  The effects also take many forms, for individuals as well as for parents.

“I wanted to show the ways it’s negatively affecting their lives,” Benay said. “Kind of showing that it’s putting a damper on their ability to be parents. Also, how it exacerbates those problems and then makes them break the law and steal.”

In many cases, Benay notes, the addiction can be mostly hidden, whatever the substance or the addictive issue. It can be disarmingly subtle, tucked away out of sight, solitary.

“This person isn’t necessarily someone who you think of as like having a life majorly messed up by addiction,” Benay said. “What does that look like, and what are their problems? How is their substance use interacting with their problems?

“That’s where the story of the aspiring musician comes in, because in many ways it looks like he is doing great. But, he does try to get behind the wheel after going on a sort of bender, and while heroin and alcohol aren’t in any way the same beast, I think it’s pretty clear that it’s not helping things he’s choosing to do.”

Perhaps the most important part of this film series to Benay is maintaining his connection to Vermont.  Benay’s message and motive can really be boiled down to a simple statement:  “I think that it’s really powerful to see yourself and your home represented on screen. I liked the idea of setting something in Vermont.

“I think that addiction in general is something that’s interesting to me, and lo and behold, it’s something that right now is really important … in Vermont. So, I knew that’s what it was. That was the thing to write about.”

While Benay has had a hand in numerous film projects over the years, he considers this to be the one he is most proud of. “I had to lean on so many people for casting, acting, production, you name it. It is humbling to see the amount of support I received to help make this thing happen,” he said.

Blue in Green can be watched for free at AdamBenay.com/northend.