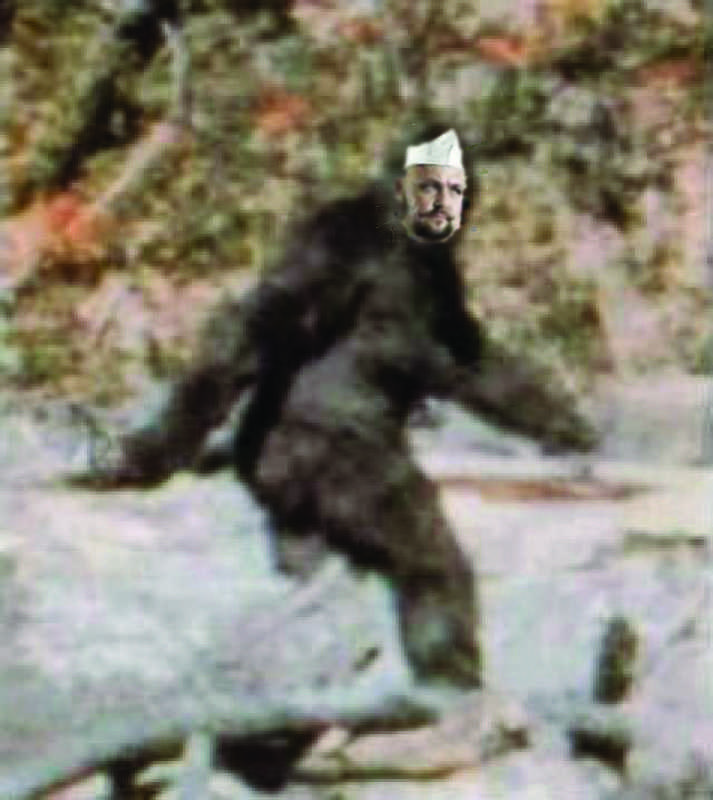 The Beast of College Hill.

This story was credited to Dixie Schlong, Public Educator.

I’d made a friend named Cain. He shortly thereafter became the first evidence of death I’d seen in as long as I could remember. I went to his house after his wife told me he wasn’t staying with us anymore. He’d checked out: he’d paid his tab in blood and electricity.

A printed article stuck out with the stiffness of rigor mortis.

The headline sang, “BOY SCOUTS PLAN TREK UP COLLEGE HILL.” I knew College Hill: it was just that, a hill, like a java-addicted mountain in a world where coffee actually stunted your growth. There was nothing on top but trees and Plot Road, which housed one of Vermont’s twelve capitol buildings – for the United Republic of Ethereally Tolerant Residents of America.

The article said the hike was Saturday. So Saturday morning I put on my Daisy Dukes and a sports bra and pulled out my permit to carry a loaded slingshot, and I met the scout troop at the bottom of the hill.

The scout leader was a round man, but only around the waist. His biceps and chest were puffed up like he’d swallowed air bags, but his stomach looked like he’d swallowed a donut – then Harry Truman got wind of it and the donut stopped there. He gave the impression of a man who’d made a deal with life without looking over the contract.

In that early morning warm breath sun he looked me over like the big fat wolf looking over a chick. The only part of him I trusted was his accent, which was English.

“I’m Dixie Schlong,” I revealed. “I’d like to come along. Many of your Scouts are among my students. Why, there’s little Ronald.”

“Your familiarity with the children attests to the truth of what you’ve said,” the Englishman said.

“What exactly are you hoping to accomplish by hiking up that hill, Mr. –”

“The Johnson Yeti?” I asked. “Are these kids after their Storytime badges?”

His left eye narrowed, and seemed to cast beams harsher and hotter than those of the sun. There was something familiar about it.

I felt queasy, like all my life was a movie and I’d speed-read the script years ago.

“May I remind you what it says on our American quarters, Ms. Schlong. ‘E. Pluribus Unum,’ that Latin business, and underneath –”

“‘Where dreams come true we love you,’” I finished. “Seem a little sweet to you?”

“No sweeter than the cookies my mother used to make,” Scout Leader Kaufman said.

“She go a little heavy on the sugar?”

“Oh, there was sugar aplenty, no doubt about that,” he said. Spittle flew from his mouth with ejaculatory glee. “It was more like she went a little heavy on the cookie, my dear girl.”

It wasn’t a long hike. It took about 25 minutes to reach the hilltop. I kept my eye on Kaufman. Had we met before? I must have seen him at a PTA meeting. Or did he have a kid in school?

I doubted that. His child was more likely to be among the options at Dunkin Donuts. But like the pumpkin latte, there was something familiar about him, an unpleasant spice.

“What now?” I asked. Kaufman wasn’t moving. Well, his chest was, moving in and out like there was a baby inside trying to roll its way out of its crib. He’d dedicated the rest of him to appreciating my breasts.

“What’s that?” he almost whispered.

“Yes,” he whispered, his eyes burning holes on my boobs as though marking potential landing places for additional nipples. He quivered and spat.

“The children sure are nice,” he drooled.

A child tugged on Scout Leader Kaufman’s shorts. The kid had to reach up to Kaufman’s hip to grip the bottom of his shorts.

“Scout Leader Kaufman? Shouldn’t we use our Yeti call?”

“Yes!” Kaufman said. “Yes! The Yeti call! Let’s see if the chap’s about, shall we? Has Ginny set down the lure?”

A spatula lay on a rock 30 yards across the hilltop.

“Excellent!” Kaufman clapped his hands together. “Let’s all join together in a shared call, children. That ought to bring him out. On my mark.”

He counted to three. Said, “Mark.” I watched the misgrown Englishman and his undergrown Scout Troop bellow toward the Green Mountains.

Silence followed. They marinated in it. Six minutes passed.

Then Kaufman said,  “Uhn, well! Must be taking a nap or something! Awfully sleepy being a Yeti, wouldn’t you think, children?”

I’d never noticed the absence of murder so much until then.

But something pulled me out of my newfound understanding of homicide. A quivering, pale child, shaking like a personified fall leaf.

Everyone followed his gaze.

30 yards away was the hairiest man I’d ever seen. I couldn’t even tell where the hair stopped and the man began. It didn’t help that underneath his fur coat he was wearing enough fat to run a McDonald’s for a day. He was clutching the spatula, exposing his forearms: as ripped as the rest of him wasn’t.

“The creature seems to have confused cheeseburgers with fried eggs,” Kaufman whispered to the children.

I locked eyes with the thing. And it clicked. A cloud passed over the sun, like a counselor giving an emotionally traumatized kid protection so she can breathe. I was that kid. I couldn’t breathe.

“The … fat chef,” I said. Finding the words was like sitting down at a piano and gracefully performing the “Moonlight Sonata.”

I looked at Kaufman. He was already looking at me. Looked like it had been good for him too.

“Scout Leader Kaufman!” the kids cried in unison. “You said a naughty thing!”

But what he’d done, kids, was even naughtier.