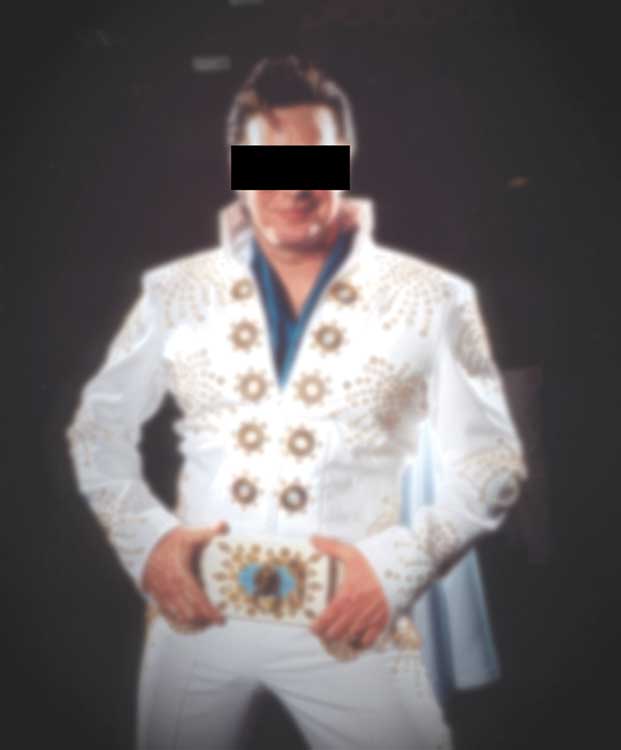 The singer is a fifty-something guy with a t-shirt that shows off his beer gut, which he happily slaps — he’s aware of it — and which gives no indication of his pipes, which are as deep as the Mariana Trench and as slick as the BP oil spill.

He swears the trailer isn’t his.

Melvis says he’s 57, “ah-give-or-take.” He doesn’t have the same skin type as the King himself, that baby face, and Melvis’s sandpaper skin stretches over his cheek bones in a way the King’s never would have, even if he’d reached 57. Melvis looks good for his age, but aged all the same, like a desert storm turned youth inside out.

“Where were you when Elvis passed on?” I ask.

Melvis’s jaw hangs. “That’s ah, very personal,” he says. “But I think I was on the can myself. Swear to god. And my girl at the time, she shouts through the bathhouse [sic] walls, ‘The King is dead!’ And my heart stopped. I said, I think I said: ‘The King of England, right?’” He laughs.

Then all the joy drops from his face like wet paint from a slippery canvas. “But no. Wa’n’t the King of England.” He pauses. “The King of Rock ‘n’ Roll.”

Melvis spottings began in the area surrounding Whiting, Vermont about a month ago. There’s no rhythm to the sightings.

One day he was seen walking down Shoreham Whiting Road, heading west from the intersection in the middle of the village. He was reportedly wearing his sequined white jumpsuit (more on this soon).

Then, two weeks later, the same individual who spotted Melvis on Shoreham Whiting Road recognized him on the Ticonderoga Ferry, despite the fact he was now wearing a flannel hunting jacket and smoking a cigarette.

He got in his early-Nineties Ford F-150 and took off. I followed him. He went about three miles down the road, turned off, and shortly thereafter turned into a small lot surrounded by woods, with a squat, white trailer in the middle.

Melvis only agreed to speak with me (it didn’t help that when he asked if I was a journalist, I replied, “Sort of”) after I quoted Jacques Costeau: When a man “has the opportunity to lead an extraordinary life, he has no right to keep it to himself.”

Melvis looked into the woods for a thoughtful moment.

“Alright, come on in.” He said the words like Elvis sang “That’s Alright, Mama.”

The trailer probably wasn’t his: the place was undecorated save for framed family pictures, none of which included anyone resembling Melvis, a fatigued army of beer cans, and a few apparently hand-sewn quilts, which didn’t strike me as Melvis’s style.

But I did see his sequined jumpsuit, yellow with years, at least two of the sequins missing, on a coat hanger.

“You sure this place isn’t yours?”

Melvis said he was born in Mississippi. “Military family,” he said. “We moved a lot. Arizona, New Mexico.”

He said he first heard the King in the backseat of his father’s military van, down in New Mexico. There he was, little Melvis, squished between his siblings, a sister and a brother, and one of the songs from Elvis’s 1956 debut record – “I don’t remember which one, I’d be lyin’ if I told ya” – came on the radio.

Melvis vividly recalls hearing his parents arguing in the front of the car – his dad wanted to listen, his mom wanted it shut off, didn’t want the kids to hear.

“Religious family, you know,” Melvis said. “Scary stuff. So I knew right then I had to, you know, ask around the other kids, see if anyone knew anything. I had to hear that song, man.”

Despite his vivid recollection of that moment, Melvis can’t remember exactly when his career as an Elvis impersonator – or as he calls his profession, “Elvis tributary” – began.

“I probably got drunk one night when I was 22 or 23 and took the stage, you know?” He laughs, then looks thoughtful. “That sounds about right.”

“Have in the past, man. I’m kind of doing odd jobs now, making ends meet. People don’t remember Elvis Presley anymore, you know? It’s unbelievable. Oughta teach the history of rock ‘n’ roll to kids, but they don’t. Yeah, that’s right: bad teaching’s put me out of a job.”

Melvis suggested the Elvis impersonator who recently sent a letter to the President containing a toxic substance might have been driven to desperation by the same situation.

“They treat our culture like it’s a fart, man,” he said.

I asked what he meant by that. He waved his hand.

“I’ve lived 15 years longer than the man himself, you know?” he said. “I don’t want to get my blood pressure any higher.” He laughed. “You want a beer?”

“Is Melvis your real name?”

“Sure, uh, Melvis Christopher Somethin’. The Third.” He had that smile again. It was an anorexic version of the smile the Man Himself always had in interviews, that bemused grin.

Melvis said, “Melvis might be my real name, you know, or it might not. I can’t give you too much.”

Instead, I asked him to give me the three most incredible experiences in his career as an Elvis tributary.

“‘Bout five or six years after I got started, I did a show for an actress, big actress” – he notices my age – “probably don’t even know her anymore. Anyway, it was a big deal at a time. Jackie Mason was there. Shook his hand. And I took a showgirl home after the show, too, yeah… that was a good night…”

“You sure it was all in the same night?”

“I don’t know about the showgirl.”

“So this friend of a friend says, ‘Listen, man, I wonder if, you know, you’d come say hello to my dad. He’s on his way out, you know, he doesn’t have much time left. But I can’t pay you nothin.’’

“I said, ‘Well hell, I’ll do it for free.’ So I went to see this guy’s dad, you know, in the retirement home, and he, he thought I was the real deal. And it was a real opportunity, you know, to get into Mr. Presley’s head. He’s asking me questions, you know, ‘Whatever happened between you and Priscilla?’ And I’ve gotta figure out, ‘Well, what the hell did happen between Mr. and Mrs. Presley anyway,’ you know? It was an eye-opener, man. And his old man died soon after.”

Melvis said the third greatest experience he ever had was this interview.

“I’m lyin’ about that, though,” he said, and he laughed. It was here that I told him he had to make up for it with an Elvis tune. I asked for “Sylvia,” but he said, “Nah, it’s been too long, and I smoked too many cigarettes.” So he did “You Don’t Have to Say You Love Me.”

Just then another fella in a truck pulled in.

“That’s Dave, man,” Melvis said. He stood up and held out his hand. “You better split.”

“One last question: any chance Elvis is still alive?”