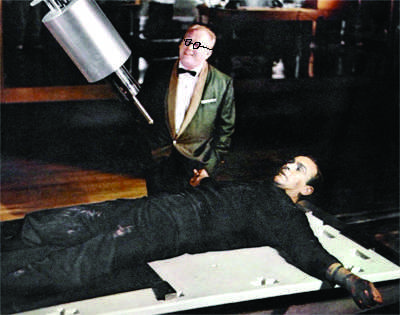 Kaufman chipperly looks on as my physical reconstructive surgery nears its end.

“Rather enjoyed the John Gardner thrillers… he has a very sophisticated style, yes, I like that… rather like Agatha Christie doing 007, ‘ey, old chap?”

As I struggled to open my eyes, I could make out a faint but familiar form: a plump Englishman.

Kaufman. He was smiling.

Something was wrong. He wasn’t wearing his monocle—and he wasn’t sweating.

My face felt like it had been cooked sunny-side-up, like I’d fallen asleep on a beach at dawn, without sunscreen, and just woke 12 hours later.

I tried to sit up but I couldn’t. I was strapped down on some kind of cold steel table.

“What the hell is this, Kaufman?” I growled.

“Haven’t you been paying attention?” he rasped in his flamboyant, English accent.

“I’ve been unconscious!” I spat.

“Well, fifty-fifty that was just an act,” he said. “Oh well. Good to see you, old sport! Sorry we had to keep you under so long.”

“You know, we don’t have the technology here, I’m afraid, old boy,” he sputtered. “Would you be so kind as to illuminate me as to the nature of your dreams?”

“Dreams?” I f—-d with the restraints.

Kaufman looked disappointed. “Now come come, old boy, enough of that! Share your dreams and I’ll tell what this is all about.” He looked at a man in what appeared to be an aluminum jumpsuit, passing by. “Number 42!”

The man was instantly at attention. “Sir!”

“Be a good chap and fetch us a spot of tea, would you now?”

“What the hell is going on, Kaufman?” I roared. “You think you can top your Doomsday Device? Switching my gender?”

Kaufman laughed. It sounded like a goat gargling. “Was a rambunctious youth, wasn’t I?”

“The past! Old boy!” Kaufman ejaculated. “The past!” Number 42 arrived with the tea. He handed a cup to Kaufman, who politely thanked him, then Number 42 brought a cup to me and carefully poured some into my lips. It didn’t taste like alcohol, but it didn’t burn.

After a few moments, he added: “With kittens!” and they laughed.

“Now back to your dreams, sport,” Kaufman said. Number 42 stood beside my table with the tea at the ready.

“I don’t know dreams from reality,” I said.

“Yes,” Kaufman agreed, sadly. “Always been your problem, hasn’t it?”

“All had those, haven’t we?” Kaufman chimed in.

“But it came to a sour end… and I was broke… devastated… drunk, filthy, bearded… there was a psychiatrist… and a strange man…”

“Bald? Thin? Ageless? Speaks with the impaired inflection of an imbecile?” Kaufman asked.

“Yes. He calls himself Moo-Moo. We suspect he’s some sort of penetrative imp from the Fifth Dimension. We’re looking into it.” He squinted at me. “What’s the last thing you remember?”

“I noticed a zipper on the shrink’s neck… I unzipped… then this.”

“Very good! Well!” Kaufman clapped his hands together. His smile stretched across his face. “As you might have noticed, there’s a gigantic, phallic laser pointed at your gigantic, leisurely phallus.”

I looked up—to my horror, he was right. A giant laser pointed at my groin.

“Well!” Kaufman continued. “Using said laser, I performed a bit of surgery on my pupils. Needless to say, it went horribly wrong. But using a modified incarnation of the time travel device I used on you two years ago—I do regret that, by the way—I was able to travel back in time and seek professional help! No more monocle for me, old boy!”

“How about the lack of sweat?”

“Simple exercise and proper hydration, old sport.” He paused. He never stopped smiling. “As you can see, old boy, I’m a new man—and so are you.”

“My face…” I tried to reach for my burning facial skin, but my hands were strapped down.

I roared, “What have you done to my face!”

“Little bit of laser surgery,” Kaufman said. He began pacing. “You see, old boy, for too long you’ve toiled pointlessly in the Lamoille County, wondering about darkness and darkness and, as you might’ve anticipated me saying, darkness. Time to cheer up, old boy! Drink tea and get tan, that’s my plan!”

“What the hell are you talking about?”

“We’ve both been rather negative, Dick. As of now, ‘no’ hasn’t a place in my vocabulary.”

My restraints slid back into the table, startling me. Nothing was more startling than the fact that I didn’t feel threatened. I sat up.

“Quite so. You’re a secret agent now, Mr. Schlong! Saving the world, soaking up the sun, sleeping with the biddies and all that!”

For a moment, I was silent.

“Mr. Schlong,” he said. He gazed upward and said, as if conversing with God, “I wonder if you’ll need a new name… Jim Union, eh, hasn’t much of a ring to it, ‘ey…” He looked at me. “The story’s getting boring. Let’s escalate our adventures and exponentially increase our appeal by making our lives an imitation of those riveting Ian Fleming thrillers of the Fifties and Sixties!”

After a few moments, I said, “Just one question.”