On Her Majesty’s Secret Sir Vice 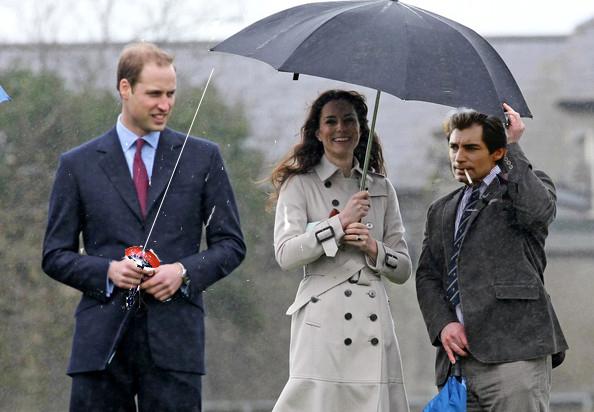 Prince Henry and I escort Kate Middleton, the Duchess of Cambridge, on the way to our swordfight.

Four months ago I was lying in my own stew, reeking of scotch, breath, and an unnatural amount of natural human filth in my mildewed office in Johnson, Vt.

Four months later, I was lying in a post-coital honeydew glaze, smelling intoxicatingly of impeccably cutting, refreshing aftershave, drunk on perfume, inhaling the scent of woman as it wafted in and out like the tide.

“John,” she started. I’d been operating under the name “King Richard the Eighty-Fourth,” seeking validation of my royal title, or at least a few pounds. Then I’d revealed to her that my real name was John Union. Richard Schlong existed only in a file at headquarters.

She looked down. “You really have given me a ‘middle ton.’”

We chuckled. She noticed she was getting a rise out of me.

I moved in with a sigh.

“Just trying to live up to my name, love,” I said, and we kissed. I was tracing her curves on a cross-country journey from Northern Clavicle to the Southern Canal when the door opened.

Prince Henry gaped in the doorway.

Catherine, the Duchess of Cambridge, pulled the sheets up over her chest. She seemed to shrink inside herself.

I lay there and fixed a cold stare on the Prince. I looked like Timothy Dalton. It was easy.

“King Richard,” he said. “It seems you lied about the sort of validation you sought.”

“Not at all.” I glanced at the naked duchess beside me, then back to Henry. “Turns out I’m a king after all.”

He undid his belt and slid out a glinting rapier.

“I’m afraid I haven’t brought my rapier, Prince Henry,” I said, climbing out of bed. I stood nude before him. “The only sword I carry is the one with which God armed me.”

I glanced at Kate. She hid a giggle behind the sheet.

“Lest ye should burden thine raquet with mine balls
Let that crystalline dagger of unnatural length,
That which resembles the dagger with which we doth stab Aphrodite
And expect a child,
Be our weapon.
Let only pleasure come too soon
Not death, on this
Rainy
English
afternoon.”

“By the crest!” he gasped. “You’ve mastered the Shakespeare tongue!”

I finished dressing. “I may not have majestic blood,” I said, stepping toward him, “but give me a rapier, and you’re in for a royal ass-whooping.”

Kate finished putting on her raincoat.

We marched down the hall, Prince Henry taking the lead, swishing his rapier about, while royal guards escorted me, two on each side. Kate fell back from Prince Henry’s side.

“What about the diamonds?” she whispered.

“The Mayflower,” I whispered. “Nine o’clock.”

“AND BRING THE TENNIS RACQUETS, TOO!” Prince Henry cried.

It was drizzling rain like my liver drizzled tears. The raindrops were as cold as the shade of blue in Timothy Dalton’s eyes.

They sizzled as they plopped down on Kate’s exposed skin. She looked at me. I gave her a wink.

We crossed the yard, then entered a building in which we found a gigantic hall that would make a fantastic library. There we were given fencing gear and placed on opposite ends of a mat.

Prince Henry asked for a ceremonial kiss from the Duchess. He was furious upon learning that this was impossible, since he’d already put on his fencing mask. I hadn’t. She was coming in for the kiss when Prince Henry cried “En guarde!” again and charged.

“Kate, look out!” I cried, pushing her out of the way. I swung my arm around and expertly blocked Prince Henry’s blow, then with my free hand I pulled out my Walther PPK and fired.

The Prince went down.

“Henry!” Kate cried. She ran to him. He was crying out in agony on the mat.

Kate faced me. “What have you done?”

I held up the gun. “Blanks,” I said. “He’s English, Duchess: he takes everything too seriously. He only thinks he’s been shot.”

I nodded at the guards, lit a cigarette, and walked out.

The Duchess arrived at the Mayflower at nine on the dot. I was sitting in the back, smoking. She’d shed her royal raincoat for civilian clothes; unfortunately, as a civilian, she’d been a fashion icon. The paparrazzi had identified her immediately; there were dozens of them in the pub, snapping photos.

I lit another cigarette.

“Perhaps they want me to write a piece on your majesty’s secret sir vice,” I offered.