Chapter 2: D. B. Cooper and the Woman’s Hips 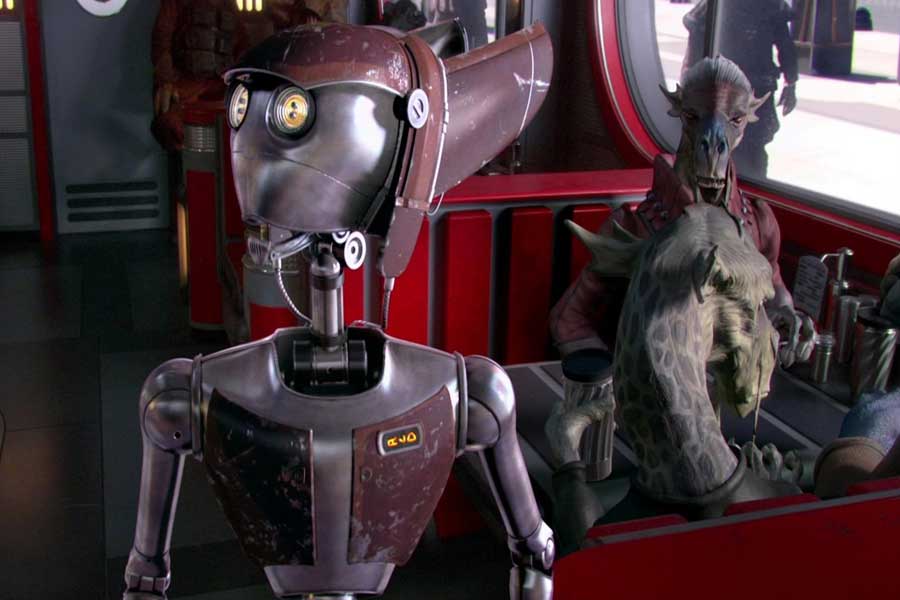 Foreground: that’s Ardy, Ardy in good health, Ardy when I first encountered him as RD-284, plunging toilets at the diner. Background: a regrettable one-night-stand.

Oh, Zia. You future space waitress you. I know it’s the year 3128 A.D., but aren’t we over the D. B. Cooper case? D. B. Cooper, the pseudonym used by the brilliant and sophisticated hijacker who stole the equivalent of $1.6 million whilst riding a Boeing 747 in 1971? Not a single lead in that case? No clues whatsoever? Isn’t that in the past, especially 1,000-plus years in the future?

Apparently not! Listen to this: Zia’s robot Ardy had been reprogrammed by her ex-girlfriend to function as a secret agent when one flipped the “SECRET AGENT” switch on his robotic rump. So Zia sent him off to retrieve the musty old D. B. Cooper files from the recently excavated J. Edgar Hoover Building back on Old Earth.

She hadn’t looked at them yet.

Once Ardy retrieved the files, she filled him on the D. B. Cooper case. Poor Ardy short-circuited.. Buzzing Zia decided to fix some coffee.

She fixed a lot of coffee in the subsequent week. She sort of missed Ardy, but she appreciated the peace and quiet: time to think. She spent the week in question on her feet: standing, walking in the diner, then pacing, pacing, always pacing back at her place. Ardy’s robotic corpse sat on the couch, frozen and collecting dust – so to speak. Of course, Zia’s apartment was equipped with the standard anti-dust equipment, and she had a mechanic who’d been trying to squeeze her for the better part of eight months, to whom she could take Ardy. But, of course, there was one thing on Zia’s mind and one thing only: D. B. Cooper.

What was in that dusty file pie, files like apples wrapped in a manilla crust? Zia seemed to believe it would ferment if it was left there on the coffee table. What if it contained an answer the FBI had just never felt fit to release? Zia couldn’t take the depression that would ensue if that were the case with this case; nay, not while she was single.

And if it didn’t have an answer, which seemed more likely – if it were only a collection of forgotten clues – what then? This case was stale in the year 2000. That was 1,000 years ago. What would she do? Time travel? Not bloody likely. The government would be on her like (finger snap) that!

What was she waiting for? Day in, day out, carrying Old USAs to intergalactic tourists, refilling their synthetic sodas, gazing into the vat of fry grease, aye, she thought of D. B. Cooper. She thought of the files. She never asked why.

“Why?” Robby said. He was the mechanic I mentioned, the one who had the hots for Zia. Here he is looking at her with little oil-burning flames in his eyes.

“What do you mean?” Zia said. “He’s broke.” She’d dragged Ardy over here by his robotic neck, which she still clutched with her famously soft fingers.

“I mean why now?” Robby said. “All these months, can’t get a word outta ya. I catch a glimpse of you, I blink and you’re gone. Now here you are, open as that doorway was before your… incredible figure filled it.”

Zia shrugged. “He needs a fixin’.”

Robby stared at her. He said, “What about you?”

Robby exhaled in the way that says “You asshole. I can’t believe you.” Via words, he said: “I’ll see what I can do.”

“Thank you!” Zia trilled, and she kissed him on the cheek. He moved his head for one on the lips but she was out the door, shakin’ her hips like a hypnotist’s watch. And still, goddammit, he felt elated.

As David Byrne sang, “The world moves on a woman’s hips.”

Zia’s hips finally stopped moving, one Saturday night in her apartment, the day she’d dropped off Ardy. They stopped right beside the coffee table. Her neck tilted her head down. Muscles responded to her brain. Her brain responded to her deeper need.

She was still hesitant to open the file.

She sipped the coffee and scalded her lips. That was just what she needed. She set the coffee on the table. She picked up the file.

She opened the file.

Cut to four days later. Robby left a message saying Ardy was finished, and that she could repay him by taking him out to dinner. Zia was increasingly excited, this being post-file, and thought about taking the Robster out for a meal (which of course meant more than a meal, or at least the sort that would satisfy one’s carnal appetite). She did appreciate his morals and ethics, and the way his stubble combined with his sea-blue eyes. Her well-honed and occasionally ignored romantic intuition said not to do it; she wasn’t all-in; she was designing another of her self-traps again. So when she picked up Ardy, Zia politely told Robby, “How about Tuesday?”

‘Twas Tuesday night and they were enjoying/sweating profusely through a candlelit dinner at the Mars Bar. The elderly surrounded them like an army of consumerist mummies, clutching their Old Earth keepsakes from the gift shop. This space station on which Zia had stranded herself was the tourist hub of the Milky Way. Saturn in the distance, Jupiter to their left.

Workers on Saturn, Jupiter, or one of the planet’s satellites or moons went right to work and back home again. Nothing to see here. The tourists didn’t get the memo. They keep flocking, flying, transporting back to see where human beings began.
Robby gazed. “You look radiant.”

Zia smiled. She lunged over the table.

“Yeah, this is more solid. This is like, I give you whatever you want in return solid.”

She whispered in his ear. He scoffed. He pushed back his chair. He told her she was crazy.

“On what? Solitary confinement?”

“Build it right and they won’t get me.”

“I’ve thought of that. We’ll stage it so it looks like I blackmailed you, really forced you into it.”

“But surely there’ll still be some penalty for me…”

She explained the D. B. Cooper case.

“What was in the file?” Robby nearly gasped.

“Leads,” Zia said. “Leads discovered years after the fact, their size worn down by those years into blunt objects with which to hit the case. Nothing more.

“But if one could go back to the start, with those sharpened leads…”

“Alright, I see what you’re getting at.” He thought, then sat back with a growl of frustration. “But Zia, I don’t even know where to start!”

“What if I told you my father had already built one,” she grinned, “and it just needed a few parts. And a tune-up. And you to operate it. Without getting in trouble. Of course. Do you like gummy worms?”

“They have those here??”

They had gummy worms for dessert. They had mucho wine. They were both excited now.

When the door slid open to Zia’s apartment, Zia and Robby swaying in the doorway, refurbished Ardy started “Hel—”, then gaped upon seeing Robby and Zia, entwined.

“We talked about this!” he cried.

Zia made emphatic “Shut up” gestures.

Robby looked between them. He got the picture.

He separated himself from Zia.

In a moment of clueless desperation, upon discovering a gummy worm that had slid between her bosoms, Zia plucked it and dangled it before Robby with a playful smile. Dangle dangle dangle. The worm danced.

Ardy leaped forward and devoured it.

When Robby had gone, Zia and Ardy put on their pajamas and sat on the couch.

“What did I miss?” Ardy beamed.

“I opened the file.”

“And?” He seemed to be looking at her, but his perpetually blank robotic face made it hard to tell.

Ardy stared at her. After a minute of staring, he began to violently shake.

“That does not compute!” he cried.

“Well okay,” Zia said. She couldn’t contain herself. “I’m going to travel back in time, I mean there’s nothing for me here but fry grease, and I’m going to investigate the D. B. Cooper case.”

Arby asked, “Will you need dinosaurs?”