Hard living in the soft underbelly of Springfield

Part 1 in a series 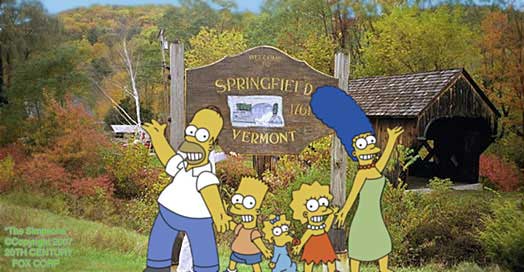 The following interviews and, subsequently, portions of this piece, were collected, compiled, and composed between March and November 2014.  One interview/portion of “The Suppository Possibility” was lost entirely except to my memory, when my notes were seized by the interviewee, a mother-to-be, in what appeared to be a paranoid fit.  So I went directly home and typed up what had happened from memory.

Regarding the authorities, the quickest argument one could make against this piece is that it would benefit from administrative voices, or at least the voices of those tasked with cleaning up the people and places herein.  My response is that the Springfield, Vermont blog, which is not maintained by the town officials but is nevertheless the de facto resource for anyone seeking Springfield news, is rife with quotes from every level of Springfield management, from the town manager to the police chief to local business owners and the officers on the streets.  Therefore, rather than rehash their statements or attempt to paint a complete picture of the town, I have provided access to voices not normally represented – those of the would-be villains.  All names have been changed to protect those therein.

“Absolutely,” said Roland Macintosh.  “Coke was the big thing like six, eight – holy fuck – eight years ago, when we were in high school?  But once heroin came in, you know, they forgot about coke.  People only care if they stumble on it now.”  He mumbles something and shrugs.

Roland was at Springfield High School at the same time as me.  He fled to Milton three years ago, after his brother met police trouble for robbery, though Roland still comes to town from time to time to see friends (most of whom, he says, live in or have migrated to the next town over, Chester, which looks like a snow globe but has its own crime scene).  Roland has since found work at Best Buy, where he was recently promoted.  I ask if he can come back to Springfield without a hidden agenda.

Roland may not be a junkie, but he was one of Springfield’s foremost crack peddlers.  He was reputed to be a walking pharmacy in high school, although his reputation soured after he was accused of pouring a select pharmaceutical into the drink of my grade’s Hot Blonde at a party, at which point her temper-deficient boyfriend cornered Roland in the lunch room, punched him in the face, and flung him over a table.  I never spoke to him again – in a school setting.

While the top layer of his class garnered money from working at Shaw’s, the then-new Peebles, assorted convenience stores, or, the Big One, Okemo Mountain in Ludlow (a few towns north), Roland and two upperclassmen discovered the town’s burgeoning drug scene.  They broke into a local office, where they stole $5,000 worth of equipment, which they then peddled to fund their entry into the aforementioned Burgeoning Drug Scene.  One has gotten out, one has occasionally tried; Roland has only gotten out of town.

“Fuck that,” he says.  He says it was like selling shit on the Internet – that he used to use eBay when he was younger, and make a relatively pretty penny off that.  When he got to high school, eBay wouldn’t cut it.  Want to sit at home, watching “Bad Boys” and “The Boondock Saints” – his choices – or “The Departed” – he adds – and only leave your house for an hour, half an hour, to make some chang?  (He drops the “e,” an in-joke with that one of his cohorts who occasionally tries to leave the Scene.  Said cohort is Asian.)

Roland did.  So he became a drug dealer.

“It’s not like everyone makes it out,” he says.  “Everyone just believes what they see on the TV.  It’ll be legal in sixty years anyway.”

“Then you’ll be out of business,” I tell him.

Springfield Police didn’t actively begin pursuing the druggies, or at least begin doing so with visible results, until 2013, so it’s hard to officially verify Springfield lore.  Unofficially, it’s quite easy, because anyone who worked in one of Springfield’s traditionally flourishing businesses – i.e. machine shops, gear-shapers and the like – between the early ‘80s and early 2000s will tell you the same story with variations – the variations being anecdotes from their own experience.

Hard drugs, specifically cocaine, became regularly present in Springfield in the early ‘80s.  The drugs arrived as medicine for the machine tool industry’s fatal diagnosis.  The advent of sharper machines meant less people to operate them; the string of layoffs ran all through the ‘80s before the trade stabilized, albeit lessened, in the ‘90s.  Cocaine’s sibling, heroin, and their cousin, meth, didn’t become commonplace in town until the late 2000s.  More on them soon.

Back when drug running was as simple as bi-weekly weed transports and bi-monthly coke treks, Your Average Local Dealer might get out of work Friday afternoon, drive up to Canada, and drive back the next day with the drugs concealed, or, for longer transports, come back Sunday night or even, in the worst cases, Monday morning.  I know this because Nat Wrong was Your Average Local Dealer in the ‘80s through the ‘90s.  Nat is a close friend of the family.  In elementary school, I wondered how so many of my friends’ parents knew Nat at the first mention of his name.  16 years later, I don’t.

Nat has worked as an auto mechanic in private practice since the early ‘90s.  He operates and has always operated on the long, lumber-lined road between Springfield and Chester, making him a prime medium between customers in each town.  Nat hasn’t dealt or come near drugs since getting busted for smuggling in Montana in 2004.  That nearly wrecked his smiley, quip-happy banker wife, and confused the hell out of his sons.

Nat says drug smuggling in his time required a certain amount of automotive understanding.  It was not a matter of people willing to transport drugs, but of people knowing the best way to do so – which was to hide them in your car, or, specifically, in your tires.

“We’d get a tire that had been used, the more the better,” Nat said.  “You didn’t want one that looked new because [the border patrol, State Troopers, and any other legal law enforcement agents]’d get suspicious right off.”  Pretty obvious.  “We used to get ‘em from junkyards or even – we’d even take them off cars we were working on.  Just slice ‘em down the middle and be careful when you put ‘em back on so the cut goes inside.  You’d hardly even notice it with all the dirt.  Seal it back up, put it on a tire.”

I ask Nat hopefully if he ever referred to transported cocaine as the Rolling Stones.  He laughs.

“No,” still laughing, “no, that would have been a good one.”

“How much did you make doing this?”

Nat says when he started dealing his senior year of high school, he made more money than most of his friends working daily jobs.  He quit his job, before his mentor (whom Nat says lost all his teeth and got busted for theft in Massachusetts, that was years ago, haven’t heard from him since, he was the star athlete in high school) berated him – you idiot!  Could you be more obvious?  Nat went in and begged for his job back.

“We took a hit, when I got busted,” Nat says.  “But it was nice to not have to worry about that stuff anymore.  I still wouldn’t mind the money, but… honestly, it’s a relief.”

These aren’t the people crime forgot – they’re the people who forgot crime.  Cocaine is the older brother who cleaned up his act.  It’s his little siblings that infest Springfield.

“We only use it recreationally, you know – well, I guess you don’t, now,” he says to Lilly.

(Re: the police, the past year’s police records report a total of four heroin-related arrests.)

When we go back inside, Dan asks me why I’m writing this.  I tell him to hang out with the other side.  “The other side is them!” Dan says.  Lilly agrees.  Their argument is that they – meaning the heroin users or drug users in general – just want to be left alone, that they’re not hurting anyone.  The cops antagonize them.  Basically what they’re saying is the cops are power-hungry.
“What about the needles on the playground, man?”

Dan doesn’t know what I’m talking about.  Needles are now regularly found amidst the woodchips that carpet the riverside playground by the middle school.  When I tell him that he says, “Aw, but see, man, those people are assholes.”  He means the needle-droppers.  “You get assholes who drink, too.  You see what I’m saying?  It’s not a big deal!”
The next hour or so involves Dan showing off the new TV he bought to Lilly.  “The Boondock Saints” is on TV.  They can’t turn away.

Then Kara arrives.  She hung out with Dan in high school, mostly weekends, since she was a Chester kid, mostly at the local punk-kids’ hangout, Rampage.  She looks like a teacher’s aide.  She’s small, blond, with a pierced Sarah Michelle Gellar nose and dim acne, the kind that only flares up when company’s coming.  She greets me with a big smile and a sunny disposition.  Odd.
But not so odd after all.  It seems to be a show.  Afterwards, she suddenly becomes quiet and withdrawn, answering questions with a polite, abrupt giggle and averting her eyes.  At least, that’s how she treats Dan, to say nothing of Lilly, who wears a superior smile for the rest of the get-together.  When I ask Lilly about it later, she says, “She’s in denial.  She’s out of control.  She doesn’t even want to use.  She just does it.”

Kara seemed in-control to me.  There’s no sign of drug use, aside from a twitch in her right eye, which probably has little to do with the H.  She’s polite.  She asks me about myself.  And when I steer the conversation toward the heroin, she seems embarrassed, even though Dan must have told her I’d be there – I hope.

How often does she use?  “Not that much.”  I nod.  She explains, “Maybe a couple times a week.”  I tap my forearm – “How do you hide the…?”  Long-sleeves, it turns out: her workplace is air-conditioned.  How did she get into heroin?  An ex-boyfriend – “He was a dick,” she says.  Six months after their split, Kara got the pink slip and “things weren’t going so well with my family.”  She ran into her ex’s best friend at a party in Ludlow; he invited her to get high with him; she went for it.

Dan comes back with Lilly.  I don’t want to ask where they’ve been, nor what they’ve done, but it’s probably as simple as kissing – or, considering their elementary school-caliber behavior, holding hands.  After all, girls/boys have coodies.  Now pass the needle.
“It’s not a big deal.  Right?” Dan interjects.

Dan says it’s only a big deal because we’re socially conditioned to believe it’s a big deal, like gay marriage or pot.  He starts playing with Lilly and I decide it’s dinnertime.  Kara offers to walk out with me.  As we step outside, that police cruiser drives past again.

Once Kara and I have run through the obligatory nice-meeting-you sentences, she says, “You know, I wish I could – quit.”

“Have you ever tried?”

“A couple times.  It’s hard without… giving it away?  You know?”

“Your family doesn’t know?  You don’t think they’d rather you got help?”

She shrugs and looks embarrassed, like that was a childish question to ask.  I make a gesture like shooting-up and ask if she’s going to do that when she goes back inside.  She shifts, shrugs, laughs (nervously), and looks generally cute, a great girl to bring home to Mom.