Counter Intelligence: The many lives of Deb Shaw 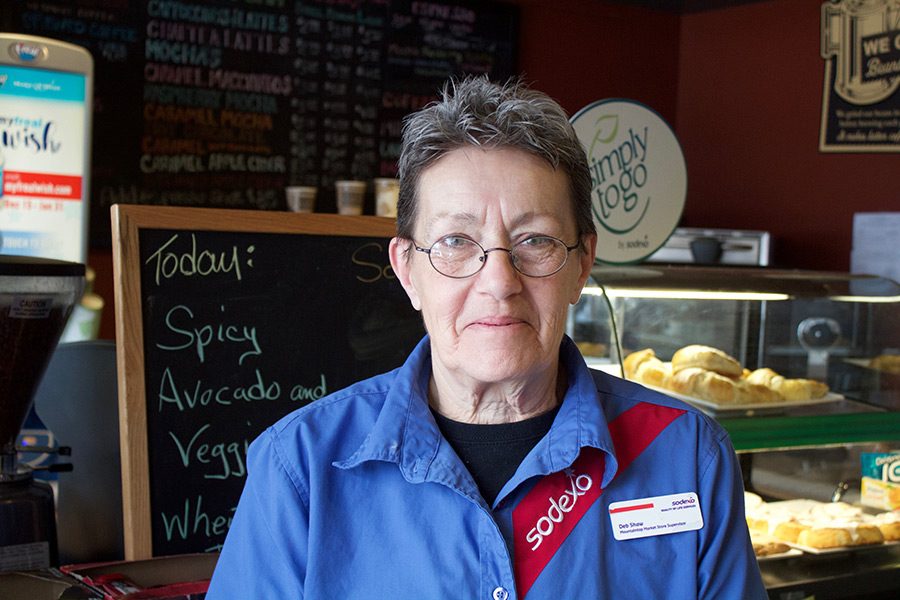 It’s a scene with which many are familiar: students and faculty flow in and out of the fireplace lounge during lunch time. The front doors open and close, and the brisk January air clings to those walking inside. Three or four people stand inside Common Grounds. A student orders a large coffee and the amiable woman behind the counter brightly asks if there’s anything else she can do, and then announces the price. She’s wonderful and her very presence exudes familiarity and capability. Her name is Deb Shaw.

Deb grew up in Boston, and spent childhood summers in Maine and Canada on family farms. She now lives in Eden, has two sons, a wife, Joanne, and a mother who lives with her. Deb’s five siblings are scattered across the country. She has seven degrees in nursing, electrical engineering, and math. She was once offered a job at NASA. She has worked as a nurse, and as an electrical engineer, and now she works for Sodexo at Common Grounds.

What do you like about working here at Common Grounds?
I like the students and the staff. The interactions. Some of them are funny.

What brought you to Sodexo?
I used to travel the state and repair refrigeration units and farm equipment, but my partner has heart disease and I didn’t want to be too far away from her. So I found a job close to home and that’s why I came here.

So what brought you to electrical engineering?
I was a nurse for 22 years. When I was done that, I decided I was going to become the electrician I wanted to be when I was a kid because they wouldn’t let girls do that back then. So I went to appliance school in refrigeration, all the appliances, washers, dryers, all that stuff, and I love it because I’m good at it. Then I realized with all the electrical wiring I had to do I really should have my license so I got a job up here and went to electrical school at Vermont Tech. I graduated first in my class.

What obstacles did you face in the field?
Being able to find a place to pee in privacy. Because I don’t take peoples crap. If someone was going to give me a hard time I’d talk to them about it. I’d explain what I was doing, if they couldn’t follow it. So yeah, the biggest obstacle for me was finding a place to pee in private. I kid you not, middle of February, out in a field of snow, not easy.

Were people surprised to see a female repair technician and electrician?
(laughs) Yes. Female one? Yes. I have had guys going around their houses, peeking through their windows as I’m repairing refrigerators or a furnace, just peeking. I’ve had farmers that just stand there, chewing whatever they’re chewing, looking at me and then they’ll question me. Once I crossed a shit pit – you know what that is?

I don’t.
It’s the trough that all the cow manure goes down, that’s the shit pit. I had to stand across the shit pit to reach an electrical box, wipe off poop, open it, scrape out poop, clean it up, get in there with bare hands of course. Got that done, I never had trouble with that guy again. I was the first female.

Why did you leave nursing?
I had always wanted to be an electrician and a refrigeration technician, but the main reason is that I had a severe concussion. I was afraid of making mistakes on the patients. I didn’t want it to get to that point.

What do you consider your greatest achievement?
My sons

What are their names?
The oldest one is Jason. The youngest is Max.

If you had $1 million, would you still work and if so where?
I wouldn’t work outside the home. If I had $1 million I would work my own property, making it look the way we want it to look. And I’d enjoy time with my family.

What would you regret on your deathbed?
I imagine I would regret that I’d be dead. I know we all have regrets but I don’t dwell on them. If I can repair things, I do.

What you want your last meal to be?
A good, thick steak and I’d share it with my dog.

You have a dog?
Yes, we have a Shiu Tzu.

What’s its name?
Her name’s Macy.

How long have you had her?
She’s ten. We also had an Akita but he passed away a couple of years ago, so they were raised together.

So you’re a dog person?
I also have a cat. I’m an animal person, really. I love animals. I also have crows that come up to me and birds. But they’re wild. There’s also a squirrel that seems to think I’m part of its family.

If you were an animal what would you be and why?
Wolf, because my Indian name according to my grandmother is “wolf that flies like an eagle.”

So you’re really in tune with your Native American heritage?
I didn’t even know about it for a long time. My core family just pretended it didn’t exist. My grandmother used to tell me stories; I found out later those stories were true. I’m really attuned to what I am, and I’m really a lot more than what I thought I was. A lot more mixed, which is cool.

What is your heritage?
Irish, English, Jewish, German, Scotch French, Lacota, Sioux, Navajo. And African American. Let’s not forget that. People stopped talking about certain mixtures to make it go away. I don’t need it to go away.

How do you define love?
I don’t know if you can really define love. It’s missing someone if they’re out of your sight; it’s feeling good about them all the time; it’s knowing even if you disagree with them you still love them. Joanne and I have never had an argument. We’re so different, it’s funny. We don’t have much in common, except that we love each other and that appears to be enough.

What’s your favorite smell?
My home. When I walk in my house. I do love being home.

What do you love most about being home?
It’s peaceful and the people I love most are there, minus one who’s 23 and has his own apartment because he’s a bigshot. It’s the center of my being. It’s very peaceful.

What’s the closest you’ve come to dying?
I hemorrhaged last July and almost died. I spent a week in SICU. Three days are gone; I have no memory of them. I woke up hemorrhaging. It actually didn’t bother me. I’m not afraid of death at all. It’s part of the cycle of life. I wasn’t ready to go, but.

What’s the last book you read?
The last one I finished was “A Brief History of Time” by Hawking and I’m currently reading “True Detectives” by Jonathan Kellerman.

What’s that about?
It’s about two brothers who have two different fathers and they’re both detectives. One’s a private detective, and they don’t get along. It’s about their interaction as they try to solve a murder case. It’s fun. It’s a good escape.

What’s one quality about yourself that you like the least?
I’ll tell you the truth. I despise my teeth because I broke my back and I broke all of my teeth from pain. But that’s being fixed. I’ll have all new ones next month. I can’t stand not smiling. It’s taking a while because they have to do a lot of bone reconstruction, but that’s fine.

What quality in others irritates you the most?
Intolerance. I absolutely despise people who are intolerant. There’s no need for it.

What’s your best quality?
I don’t know. Probably the ability to tolerate others.

Except for intolerant people?
Well, it’s not even that. I don’t care if you have purple, green, polka dot, have three legs or have three arms. I don’t see it. People say, “Who was that black guy?” and I say, “What black guy?” We’re going to go with this one, though: I can get along with animals, even wild ones.

If you could invite five historical figures to your house for dinner, who would you choose and why?
Agatha Christie. She’s one of my favorite authors. Arthur Conan Doyle for the same reason. Victor Hugo because I would have to get inside his brain and see what he sees while he’s in there. Hitler, prior to his becoming the horrible person he was to see if I could give him electric shock therapy to change him. My ancestors. I’d like to meet my ancestors that people have forgotten. It doesn’t matter which one since people don’t remember who they were anyway. I’m American Indian.

What’s the nicest thing anyone has ever said to you?
“I love you.”