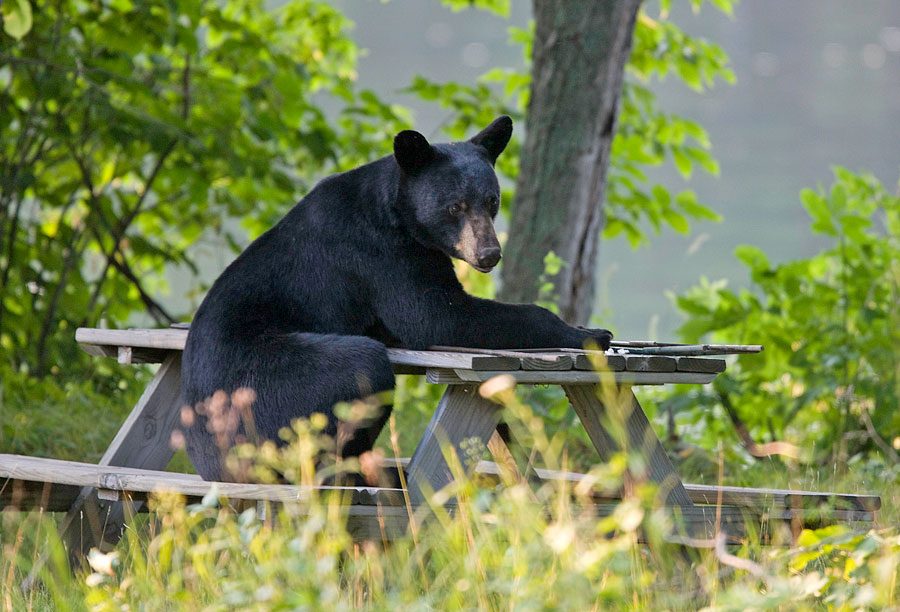 During the winter, usually the biggest pests that people need to worry about are squirrels. However, as soon as the snow melts and the temperatures get warmer, the pests become much bigger and heavier. Black bears are a common problem when winter comes to an end. They get into everything from bird feeders and trash cans to compost bins and barbeque grills.

According to Vermont Fish and Wildlife, the black bear population is now estimated to be higher than any time before the European settlement. Before the European settlers arrived, much of Vermont was dense forests. These forests provided an excellent habitat for black bears. By the 1850s, almost two-thirds of Vermont’s land was cleared for farmland. From the 1850s to the present, some fields and pastures reverted to forests. Over 80 percent of Vermont reverted to forestland. The majority of black bears are found in the center spine of the Green Mountains, from Massachusetts to Canada, and in the northeastern part of Vermont.

In the summer, trash becomes smellier because of the heat. According to the Humane Society of the United States, black bears can smell food from 20 miles away, and once they find food, they will keep coming back unless the bear is killed or removed from the area.

Black bears can eventually lose their fear of humans. Every time a bear finds food and does not get frightened, it will come back. The more times this happens, the less fearful it becomes of humans. These bears are known as “nuisance bears” and are usually either males who have just started living on their own or mothers with young cubs.

If a nuisance bear finds its way into your yard while you’re outside, there are some ways to scare the bear away without threatening it. The first thing is to stay calm. Of course, that’s much easier said than done, but bear with me.

Do not try to run away from the bear because it might chase you. According to Discover Wildlife, a black bear can run at speeds of around 40-50 kilometers per hour (kph). Imagine having an approximately 240 lb. black bear charging at you at speeds of about 40-50 kph before you think about running away.

Also, do not think that if you climb a tree that the bear won’t follow you, because that bear is a better climber than you are. Do not approach the black bear. You are not a bear tamer, and it will not appreciate your trying to come over to it. Do stand facing the bear and make yourself look as big as possible by spreading your arms or a coat. Also, make as much noise as you can by banging things together or yelling. Do not play dead! If you do, the black bear might walk over to you and scratch you or step on you. After the bear has left, take away whatever attracted the bear in the first place.

In order to avoid this situation, there are precautions you can take. The Humane Society of the United States provides ways you can help lessen the chance of a black bear encounter. First, make sure your trash cans are not left outside at night or buy a bear-resistant trash can. These are simply sturdy metal containers with a latching lid.

If you have a compost pile, then make sure you enclose it, especially if you have food scraps.

When recycling, make sure the bins you use are enclosed. Grilling meat is popular in the summer, but bears will also try to partake in this activity if they get a chance. After using your grill, make sure to clean it or else the bears will come and do it for you. At least they won’t insult your cooking. Last but not least, bring your bird feeders in. Birds are able to dig for food and will survive on their own. If you still insist on having a bird feeder, then set it up away from your house.

Black bears can show up anywhere, even on campus. John Dabrowski, a member of JSC’s class of 2016, saw one in the woods back in the fall of 2014. Out behind the college apartments is a system of trails often used by the cross country team. “I was on my way out to the top of our trail system near the water tower to finish some work I started the day before,” said Dabrowski. He was given a summer job to work on the cross country trails and prepare them for the upcoming season. One day, while he was out working, he came across a black bear.

“The bear was not very big, it looked like it was an adolescent. In fact, it seemed quite scared of me,” said Dabrowski. This is typical as bears usually want nothing to do with humans. “At first I was in a bit of a shock, it took me totally by surprise. Then I just felt like I had to either scare it away or move away myself.” Dabrowski was alone when he saw the bear, but he was able to scare it away. “Luckily, because of what I was doing, I had a metal rake and a shovel. I clanged them together and slowly backed away from the bear. It ran off into the woods. I really never felt threatened, and I tried not to threaten it in any way.”

Since his interaction with the bear, Dabrowski has not seen any other bears or any other signs of bears such as tracks or claw marks on trees. Dabrowski said, “My best advice would be to make noise and respect the bear by backing off very slowly. I honestly feel like I lucked out having large tools with me.”