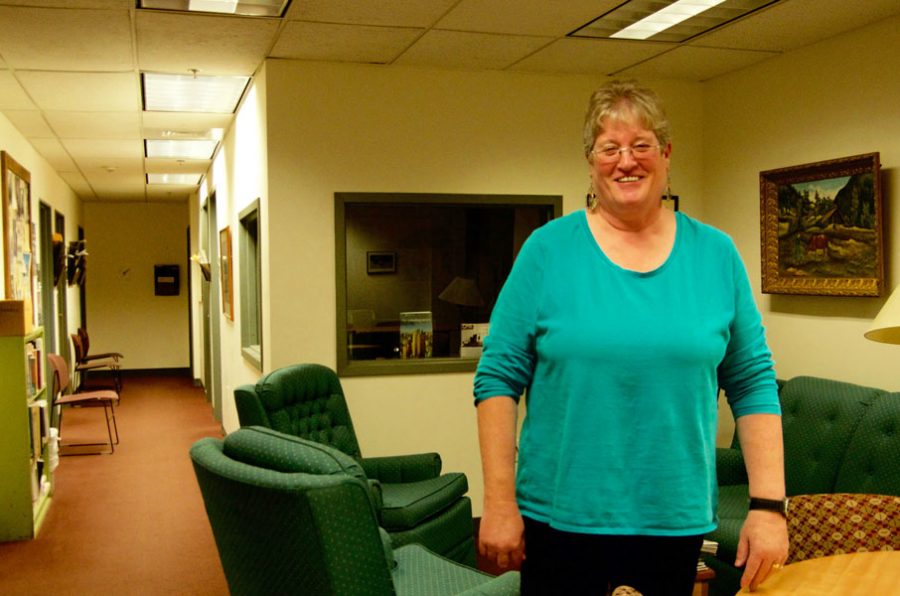 Sandra Noyes has been working at JSC for 24 years. Along with serving as campus chair for the represented staff union, Noyes is staff assistant for the Humanities and Writing and Literature departments.

What is your favorite part of this job?
I think I’m supposed to say the students. That would be the right answer, but I do, I love the students. I think it’s the way I have so much to do all at once, I think it’s doing several things at once, and dealing with the different personalities out here, including the students.

What is your least favorite part of this job?
Probably having to change out of my flannel nightgown.

If you were the graduation speaker, what would be the gist of your address to the class of 2018?
I would probably tell the students, “Hold your head up high, be proud of Johnson State, represent the school and use your head for more than a hat rack.” You know? Don’t be stupid and go out there and do stupid stuff, and I don’t mean that would hurt us but that would hurt themselves. Just use your head before you do these things. That’s what I think.

Is there something about you that members of the JSC community would be surprised to know?
I was thinking about that this morning, whether I had any deep, dark secrets. I don’t think I do. We love to go out dancing, but people who know us know that. I don’t know how many people up here know that. Wade and I go out dancing and we raise so much hell when we’re dancing. I get to hooting and hollering and I usually have laryngitis the next morning, and I think that’s why Wade doesn’t argue with me when I am hooting and hollering because I can’t talk the next morning. So I would say going out dancing and raising hell the way we do. We’re doing it again this Saturday, too.

What would you like written on your tombstone?
“Sandy covered my ass so much that she should be my underwear,” and there’s so many people that can say that.

What is your go-to comfort food?
Ben and Jerry’s Coffee Heath Bar Crunch. I guess they don’t call it that anymore, they call it Coffee Toffee [or something], I don’t know. It’s not Heath bar anymore. Technically it doesn’t matter, but Coffee Heath bar Crunch is my favorite. It keeps me up all night too.

If you were on death row, what would your last meal be?
Steak, egg and cheese bagel from McDonalds. No onions, extra seasoning and a glass of unsweetened ice tea.

What trait do you admire most in others?
Honesty. I want someone to be honest with me, and that’s one thing my husband says: “When Sandy leaves the room, you never need to wonder what she’s thinking because she’ll tell you just what she’s thinking, and you may not like it, but at least you’ll know where she stands.”

What trait do you admire least in yourself?
My weight. That’s probably what a lot of people would say, isn’t it? My weight, I think, is a big problem for me.

What do you think your best quality is?
I think it’s my smile. When I meet people of course I smile at them, and if they look like they’re not in a good mood I’ll just say, “Hey, how are you today?” and I smile at them.

Do you have any hobbies?
Dancing, grandchildren, VFW. We’re big supporters of the Hyde Park VFW. And the games on Facebook.

What is your greatest treasure?
Besides my grandkids, my earrings. I have about 300 pairs of earrings, so don’t screw with my earrings.

What is the greatest compliment you’ve ever received?
I’m most told I’m competent, but I’ve been told I was beautiful. I was 50 years old when I finally got told I was beautiful. And that I’m a great granny. I’m just a wonderful granny. I guess I don’t think about it because I’m just, “This is me.” You know, someone says, “Jeez, you’re wonderful,” and I’m thinking, “Okay, what else am I going to be?”

If you could have any five people from history to attend a dinner party, who would they be?
Oh, Lucille Ball, Conway Twitty — I love Conway Twitty — Archie Bunker. I’m going back to the old shows. Does my husband have to come? He’s not invited, but I may have to just to fill the table. Roseanne Barr, she’s a riot. She and I can talk dirty together. I need one more person, I guess Wade could come. We’ll have Wade go too.

Have you ever been embarrassed?
My face is red even thinking about it. I was in Price Chopper one time and I went up behind this guy, and I thought he was a cousin of my late husband’s. I went right up behind him and grabbed his ass and said, “Nice ass!” He turned around and it wasn’t him, but he did say thank you. I’m always embarrassing myself anyway, but I think that is the worst one. When I grabbed that guy’s ass — oh my God. I have to go to Price Chopper today and now I’ll be thinking about that the whole time.

What is your favorite memory with your family?
I like it when all of us get together because we don’t see the other side of the family very much. They’re not really far away, but everyone’s so busy, so I like it when we all get together, Wade’s family and my family. Our sons knew each other at the Lamoille Union High School 10 years before Wade and I even met each other, so our sons already knew each other. That made is really easy for the families to come together, but that’s what I like. I like family time with all of us, with all six grandchildren and all of our kids and their other halves. Like the day we got married and everyone was together, but they’ve added more grandchildren since then.

What is your favorite thing to do with your grandchildren?
Anything. What we do is, when they come over to visit us, we make them leave their electronics at home. We don’t think they need to have their faces stuck into the electronics, so we make them leave those at home, and we usually take them outside or give them projects around the house or the youngest one will bake something. Anything to get away from the electronics and just keep busy. That’s what we do with them, we just take them outside and play a lot with them. Wade will stick the littlest one up a tree and let her climb around to try and find apples, and he likes taking them out to pick berries.

What do you admire most about your union?
VSEA is my union. It’s Vermont State Employees Association, and the union actually helps so that the administration can’t make us work in crappy environments, that the safety equipment has to be there, our contracts are there so we can make sure that we get good raises, and even health insurance to make sure we’re covered. We have to pay for it, but I’d rather pay for it than go without. I’ve learned a lot about a union since becoming an officer, I really did. I grew up in a paper mill town, so my stepfather was part of a union. But I didn’t know much about it except when they went on strike, and I thought they were a bunch of stupid idiots. But when you rely on people to decide what you’re going to be bringing home every two weeks for pay, they’re not such stupid idiots. I like the union because it does keep us safe and it keeps them on their toes, but they’re pretty good up here. They really are. If we have a problem, I just go talk to Sharron Scott and say, “Sharron, this can’t be done,” and she’ll say, “Well, let’s talk about it.” So we talk about it and we figure out who’s right and who’s wrong, and that’s what we do.

What do you do within the Veterans of Foreign Wars (VFW)?
I am now President of the Auxiliary. I’ve held a lot of offices there, and Wade and I go there a lot when they have different functions going on. With the functions, sometimes we’re working in the kitchen selling the food, other times we’re out on the floor, and when they have rock bands in there we’re manning the doors checking IDs. When they put on suppers and stuff like that we’re there helping them, and we just did the Halloween party and put that together for the kids. We just do whatever needs to be done, and we’re there for the veterans. I’m on Facebook all the time putting stuff out there to let the public know what’s going on.

If you were a speaker for Alcohol Awareness Week, what would you say or want to do differently?
I would want to let the students know the reality about drinking and driving and drugs. When they put on those goggles I hear some of the students say, “Hey, this is cool!” I don’t want them to think that drinking and driving is cool, because it’s not cool at all. With me, I don’t get into statistics. I hate statistics, I do, I really hate statistics. I would get on there and deal with the reality. My late husband was an alcoholic, and with his drinking and driving it was always, “Is he going to make it home?” One day, we had been separated for several months, he was killed. I would rather these kids hold up a piece of paper that is a degree to show their parents than for their parents to have to hold up a student’s death certificate and look at that instead of that degree. That is what I would do differently.