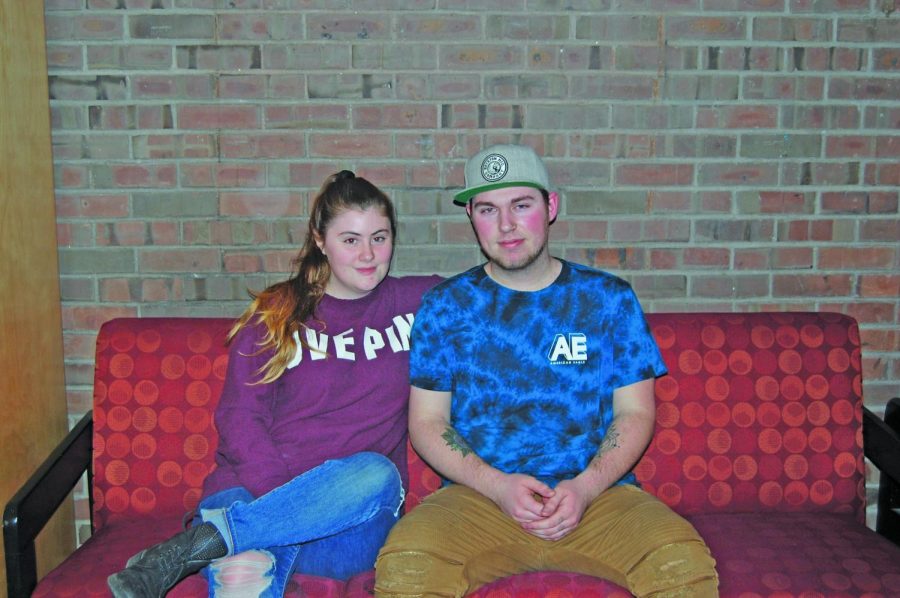 Story and photo by Kylie Brown

“The moment that I decided that he was the one and I wanted to get married was literally the first time I saw him,” said Johnson State student Deanna Trahan. “I know that it sounds insane, but it’s true. I met Tyler in the Hannaford’s parking lot, and for some crazy reason I looked at my best friend and said, ‘I’m going to marry that boy over there,’ and here we are!”

Most are unable to say the same, especially those who, like Trahan, is only 20 years old.

Trahan and her fiancé Tyler Rushton are planning to get married in August 2019. They have been engaged since February of 2017 and are planning their wedding.

Fifty percent of marriages in the United States end in divorce. According to McKinley Irvin Family Law, in an article called,“32 shocking divorce statistics,” for those between the ages 20 and 24, the divorce rates are 36.6 percent for women and 38.8 percent for men. This age range has the highest divorce rates.

Marriage is a serious decision that requires maturity and preparation. How could an individual who’s just barely entered adulthood feel they know they’re truly ready to take the plunge? Statistically, it’s clear younger marriages are prone to fail and therefore are frowned upon in society.

Trahan and Rushton may be sailing against the current, but they are not alone.

Ava Ogilvie, 20, a born and raised Vermonter, will be getting married this August. She and her fiancé Chris Prouty have been together for nearly a year and are living together at Ogilvie’s grandmother’s.

Autumn Bill will be getting married this July to her high school boyfriend Ethan Brace, both 20 years old. She moved from New York to Vermont in middle school and has been living with Ethan at his parents’ for a little over a year. Bill and Brace have been together since Bill’s junior year of high school.

Ogilvie knows best out of the three women what it’s like to feel a societal backlash for choosing to marry young. Ogilvie and Prouty have been planning their wedding entirely on their own because their families are displeased with their decision.

“We know not many people will support our marriage . . . We know people believe we’re still children and have no idea what we’re really doing,” said Ogilvie. “We still want to get married despite people’s doubts, because we love each other and believe we can prove them all wrong.”

Ogilvie and Prouty agree that although people find their decision juvenile and impulsive, they see it as the most sensible and deliberate thing they will ever do. “It certainly hasn’t been easy,” said Ogilvie. “My mother barely talks to me anymore and I’m sure this is why. Many have urged me to back out or wait a few more years and I hear them. I know why they say what they do.”

Ogilvie struggles to convince her family that she and Prouty are not a statistic but two human beings very much in love and committed to one another. “We are very young and we’re still getting to know more about each other every day,” said Ogilvie, holding Prouty’s hand firmly. She smiled and continued while looking at him: “I like that we will be able to grow together as people and know each other almost better than we know ourselves. It’s a kind of closeness I never thought would be achievable for me.”

Unlike Ogilvie and Prouty, Bill and Brace have an abundance of support from their friends and family. Brace’s family has been a great help in trying to plan the wedding and are excited to have it all come together. Bill says that in this process of getting ready to marry, she’s gained so much more than she ever imagined. “I have a whole new family now,” said Bill. “Growing up, I never really had any close connections with my own family. It’s incredible having this great big network of people who care for one another and make me feel like one of their own. They welcomed me in with little hesitation and love seeing Ethan and I happy together.”

In this process of getting ready to marry, they’ve found marriage has already exceeded their expectations of what they had thought it would be. Bill believes there are some unexpected personal benefits to getting married, such as feeling more confident, stable and worthy. “It’s let me walk taller and ultimately come to a place where I can love myself and forgive myself for my shortcomings,” said Bill. “I never forget how lucky I am to find such an amazing partner and become a part of such a huge, loving family.”

Bill and Brace have gradually come to a point where they barely remember what it was like to not be in love and totally confident that they would be together forever. Bill says there was no specific moment for her, but a series of small actions built up over time. Brace recalls an ordinary evening that for him confirmed their ability to be together for the rest of their lives.

“She came over to my house one night and we made dinner together,” said Brace. “I was sitting across from her and when she looked up at me, I just thought I’ve never felt so comfortable with anyone in my life. For me, it went beyond feeling like this is how I want every night of the rest of my life to be. I couldn’t imagine not having it that way for the rest of my life.”

Despite their choice being accepted by their family and peers, and being confident in their love for one another, Bill and Brace still face general scrutiny as well. They both recall uncomfortable situations with people who seem to think their getting married is a joke.

“The initial reaction is always that I’m too young, and how can I make such a big decision this early?” said Bill. “I must be pregnant, right? This has made me wary of discussing the wedding with anyone but those close to me, which can be a bummer because sometimes I just want to shout it from the rooftops!”

Although it is clear why many find young marriage to be trivial, these couples trust their reasoning for getting married and see it as enough to overcome the struggles they will face.

Bill and Brace were good friends long before they began dating and attribute their success to that thus far. “We have seen each other in our darkest places and pulled each other through them,” said Bill. “We can sit in silence comfortably or talk about a single mundane subject for hours. These are the qualities of someone I want to spend the rest of my life with, and that’s coming from someone who can be easily exhausted by lengthy company.”

All three women believe that being friends is a part of the foundation of any successful relationship. “He is my best friend,” said Trahan. “We have seen each other grow up, stuck by each other through the craziest circumstances, and there is no one else on the earth I would want to go through life with. We can tell each other anything, be as goofy as we want, and not have to worry about judgment.”

But, of course, knowing you’re ready to marry goes beyond being good friends. Knowing that this decision requires maturity, Trahan emphasizes that she feels this is a rational decision. “I think that we are ready to make this jump because we are basically living a married life. It wouldn’t be much different than what we are doing already,” said Trahan. “We are really good at communication. There is nothing bottled up, so we can just get right to working out whatever is wrong and move forward.”

All of the soon-to-be brides say that there are of course some concerns about getting married this soon. The biggest concern is that they will struggle with financial stability and will need to look for their own homes as they are living with family right now. None of them are concerned with their feelings about one another changing over time, which in their opinion will be the larger determining factor for their success. “I really have no worries about getting married or the wedding. I mean, other than the whole falling on my face while walking down the aisle thing,” said Trahan.

They’re all busy planning their big days with some stress and lots of enthusiasm. Putting the material components of the wedding aside, Trahan says, “It’s a party to celebrate us. At the end of the day, whether the wedding is 10 million dollars or just at a courthouse, I am marrying the same man. I just want everyone to have fun. I want there to be some great food, great memories and lots of love.”