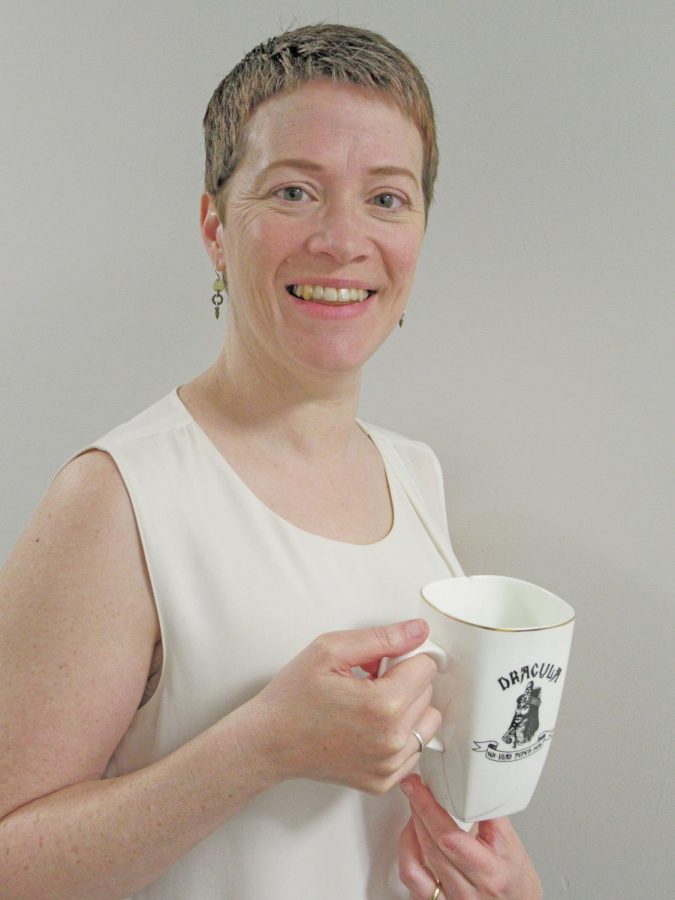 Associate Professor Sharon Twigg is chair of the Writing and Literature Department and specializes in British Iiterature. She does double duty as associate academic dean at Johnson.

You have dual positions here, one as associate academic dean at Johnson and one as associate professor and chair of the Writing and Literature Department. What do you like about being a dean?

I really like administration, which is a deeply uncool statement, but what that means is that I like overseeing programs and designing programs from the big picture down to the little details. I get to work a lot more with other academic programs and departments. I’m sort of interested in everything. It gives me a chance to expand my disciplinary horizons. I just really like planning and design so I get to be involved in the different processes and decisions of the whole college like the new Gen Ed program. I was like a pig in mud with that.

And what is the attraction for teaching?

In terms of being the department chair and associate professor, what I like is that I am still pretty involved with students one on one, often behind the scenes. I’m going to be teaching Gothic Lit in the fall and that will be really fun to be in the classroom. The question I get a lot is, “Do you miss teaching?” And my answer is no because I really like what I’m doing now. I’m just as happy doing teaching as I am doing administration as I am doing whatever. The challenge for me is trying to narrow it down because there are a lot of things that I like to do.

Why is literature important?

I think that the study of literature can train people in all of those soft skills that we hear a lot about today. Those are skills like having a critical point of view, having an ethical point of view (not to say that other disciplines can’t train this), different value systems, empathy, considering many different points of view at once and then being able to come to your own reasoned conclusion with the understanding that many other people may have different equally well-reasoned conclusions, or not. The other thing that you can learn through the study of literature is really good communication skills. The more you read, the better you are as a writer, the bigger your vocabulary is and the better you can express yourself. One of the biggest boons that reading literature can have for anyone is that it has that effect on their verbal and written communication skills, which are really highly valued… So go read something good.

You’ve taught a freshman seminar on vampires. What is your fascination with these blood-sucking creatures?

It’s just really interesting that our culture has been fascinated with them. The first short story in English about vampires was I think in 1819 by John Polidori, who was the physician for Lord Byron. He wrote this story called “The Vampyre” and since then writers in England and the United States have been churning out vampire stories. So I’m fascinated with our fascination about vampires. The thing that made me decide to do more research and teach a first year seminar on the vampire (and I’m only slightly embarrassed to say this) was the HBO series “True Blood.” So I was like, “Wow we could watch an episode of ‘True Blood’ if I taught a class on the vampire” which is not a good reason to teach a class at all. So I actually spent a full summer researching the history of the vampire. I uncovered all this information that I hadn’t known about. We started out reading some late 18th century testimonies, Slavic, Eastern European testimonies about vampire outbreaks in Poland. People believed vampires were plaguing their community. They would start by digging people up and cutting out the heart. They would usually find blood in the heart because corpses usually do have blood in the heart, but they would find it and say, “Ah ha, this is a vampire!” They would do lots of things to the body like cut off the head and burn it or maybe just burn the heart. The other reason is that my specialty in literature is 19th century British literature, which is the era when “Dracula” was written so I sort of had that beginning perspective.

Obviously “Dracula” is the big one, but what are some other literary works throughout the 18th and 19th centuries that relate to vampires?

The romantic poets did write some poetry about vampires. Byron did. I think Shelley as well. There’s this really interesting novella called “Carmilla,” by Sheridan Le Fanu, and it was written before “Dracula.” Carmilla was a female vampire and that novella really closely follows a lot of the Eastern European folklore tales. I kind of like that the earliest novella in English about the vampire is actually about a female vampire and “Dracula” just sort of comes after that.

As a specialist in British literature you must have favorite authors and periods. Can you tell me a few of them and why they specifically resonate with you?

I really love the Victorian period. George Eliot wrote one of the greatest novels of all time in any language, “Middlemarch.” George Eliot is actually Mary Anne Evans—it’s a pen name that she used her whole writing career. The protagonist is a young woman who wants to be a scholar, but that’s just not an avenue at all so she marries one. She thinks she’ll be able to become more educated that way and be able to help him. He turns out to be a jerk and he dies, which is probably for the best. And she sort of has to find her path and her happiness in other ways, which of course she does because it’s a Victorian novel and they often had happy endings. Christina Rossetti is a poet, perhaps the greatest English lyricist of the 19th century. Then pretty much any other writer that I sit down and focus on and read I think is great.

You mentioned George Eliot being a pen name. Can you just talk a little bit about the dynamic of women using male names as pen names and why they would’ve had to do that at that time?

A lot of female authors would either not give their name or use a fake name, a male name. And the reason why is that they got better reviews when people thought they were men. This is very true of Charlotte Bronte when she wrote as Currer Bell. The critics were trying to figure out is this a man or is this a woman? The critics who decided that it was a woman wrote bad reviews and the critics who decided that it was a man thought “Jane Eyre” was a great novel. And it’s still going on today. It’s that issue of unequal pay. If the author was perceived to be a man, their work was more highly valued both critically and monetarily. The other reason though why women used [pen names] has to do with the cultural phenomenon of it being improper for women to be in a public space or to have a public role. They were supposed to be at home. They were supposed to stay in private spaces. Of course that didn’t match reality at all but that was sort of the idea.

If you could have a dinner party with five writers, living or dead, whom would you pick?

I have to insert a disclaimer about this. I find it hard because as interesting or as famous or as good as they might’ve been, in person they might not be that interesting or they might be jerks. And the other thing is, why would they want to talk to me? So I think it would be a really awkward dinner party, but Oscar Wilde, Mary Anne Evans (George Eliot), definitely Jane Austen. I’m picking these famous writers partly because I love their work and partly because I think it would make for a good dinner party. Having Oscar Wilde and Jane Austen there would help a lot. See I would invite Christina Rossetti but I can’t. I can’t put her in that group. It would be very awkward. Wilkie Collins I think would probably be good. Oh you said they could be living writers too. See I immediately went to the 19th century. I guess Virginia Woolf. They’re all dead. That’s the best I can do.

What would you like inscribed on your tombstone? If you’ve given it any thought.
I have not given it any thought but I just turned one year older and so that’s actually the kind of question I take too seriously. “She loved dogs and horses.” I think that says a lot about someone so yeah that’s the best I can do right now.

You have two horses. What is it about horses that you like?

Everything. I am happy with horses whether I’m riding them or whether I’m shoveling manure. I started asking for a pony as soon as I could write and my mom still has a letter that says, “Dear anyone, I have to have a pony. If I don’t get a pony I will die. Signed, Needy,” and I left that note for my parents. I had to have a rabbit first because my parents wanted to teach me that I had to take care of it. [That’s quite the step up] Yeah it was a step up from a bunny to a horse. What I love about them is they are really smart. And I’m not a risk taker at all. I don’t like to downhill ski. I don’t even like to cross country ski because I fall over. But I have been bucked off horses so many times—I realized this is the one area where I don’t have any fear. When I’m with a horse it is the only time that I don’t think about anything else. For me it’s a necessity.

No. Only because he’s devoted to me, and he gets it. If he wanted me, he had to take the horses, which he does and actually he is very good friends with my retired horse, Bob. He doesn’t really ride at all. He doesn’t really want to spend a lot of time with them. But he’s happy to have me go out and do my thing.

What are your guilty pleasures as far as books and food?

Gravy. My own homemade gravy. I feel guilty about being a meat eater but I make pork roast a lot and I make pork gravy and it’s really, really good. I was going to say I don’t really have guilty pleasures for reading. It’s hard for me to read crap because it just doesn’t hold my attention. The language makes me feel a little unwell, but I do have guilty reading pleasures and it is the blog Corporette, which is a blog about fashion for “high achieving chicks.” I’m not the audience for it. It’s a fashion blog for people who are female lawyers and stuff but I have a fashion obsession. I don’t care if I’m fashionable but I like clothes so I read that at least a couple times a week.