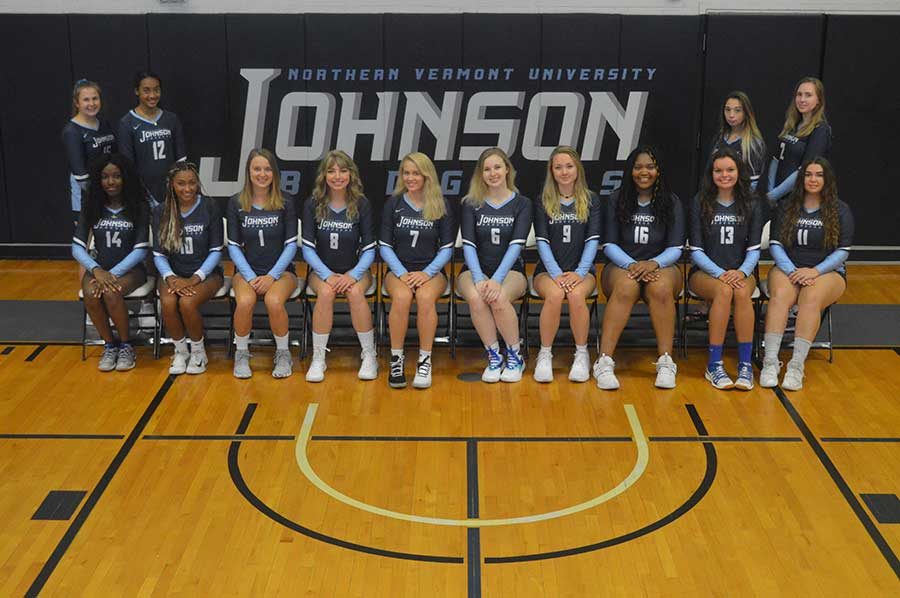 The gym is quiet once again for women’s volleyball at NVU-Johnson, but this year’s team made quite some noise by making the North Atlantic Conference playoffs for the first time ever.

The team ended the regular season with a 13-12 record, 4-2 in conference play, which earned them a three seed in the playoffs, squaring off in the first round against SUNY Canton on Nov. 9. Canton started out in front, winning the first two sets by narrow margins. The Badgers came back and won the third set, but it wasn’t enough as Canton won the fourth set and the match 3-1. Canton would eventually lose to Maine Maritime in the championship game the next day.

Along with a successful campaign, several players were able to grab All-Conference honors. Freshman Porsche Johnson was named NAC Rookie of the Year, and second-year Head Coach Keven John was named NAC Coach of The Year.

Junior Lauren Havill was named to the Second Team All-Conference and earned NAC All-Tournament Team in her first year with the team. As a transfer, she made an immediate impact. She was second in the conference in aces per set, and was the team’s Swiss Army Knife, playing and excelling in three different positions this season.

“She was everything we needed all season long,” John said. “The fact that she ended up second in the conference in kills per set after starting the season as a libero says a lot. She became unglued and just destroyed for a good chunk of the year. We are excited to see her back.”

“First year in college volleyball, there are a lot of ups and downs for freshmen,” John said. “She wasn’t immune to it, but she fought through it. She has a ton of talent, which led to her putting up monster numbers all season long. She’s already talking about how she is going to be better for next year, like how she is going to get to that next level. That’s an exciting thing to hear as a coach.”

With John being named conference coach of the year, he noted that the award is for the team that wins the conference or that improved the most from the previous year. He believes that the award is nice for press releases and social media, but it’s really more about the fact that his team is on track to where they should be.

With the season officially over, it’s time for John and his team to start looking at next year.

“The next big steps for us are to bring in a little more defense and fix up a few spots here and there, but we are ready to compete in the future,” he said. “This season was everything we needed it to be for that to happen. We had brought in a bunch of freshmen and transfers that were solid for us. We are on to a lot of quality athletes coming in. There is going to be even more competition in our gym for playing time. Steel sharpens steel kind of idea that we are going for.”

John noted was that the two teams that they lost to, Canton and Maine Maritime, are losing key players and will be rebuilding a bit. Despite his team losing two seniors, he will be returning a huge part of his core team next year which will be a huge advantage for them.

“That being said, we are going to work hard,” John said. “We are going to get into our non-traditional season and we are going to shore up some of our deficiencies that we have skill-wise and get better. The women on our team have their eyes on the prize. They aren’t happy with people say ‘This was the best season ever.’ They just aren’t. They are going to be happy when they get to walk on an NCAA tournament court and play for a championship there. That’s our goal. We are looking to win conferences and to go to national championships. We are looking to be nationally relevant.”

Before John looks on to next year, John wants to thank the community for their support. The last two home games for the team had a great atmosphere and was a lot of fun.

“There is going to be a lot of entertainment in that gym and we are looking for people to come in and enjoy it,” he said. “We are really happy with what’s been going on. People are getting the word, and I just want to say thank you to them.”