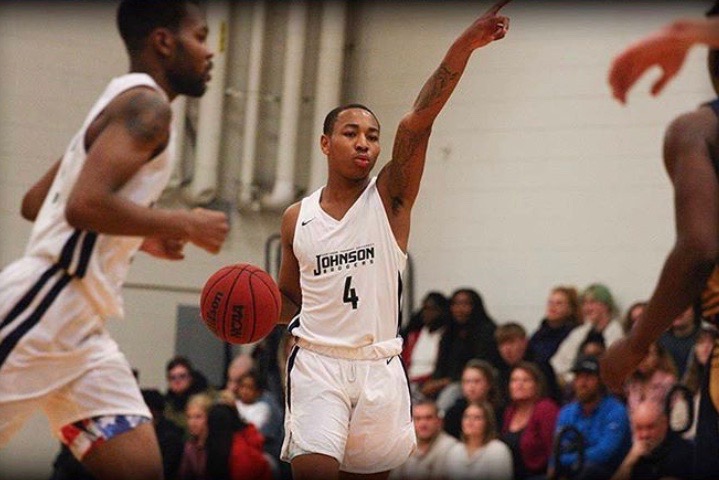 For the NVU-Johnson men’s basketball team, the 2019-2020 season is one to remember as they finished their year in the playoffs for the first time since 2016.

The first half of the season was a mixed bag. They won key games against Vermont Tech, Curry College, and Maine Maritime Academy, and fell in games to some tough opponents such as Middlebury College and New England College.

To start the new year, the team had a tough time getting themselves a win, losing six games in a row. At that point in the season, the team was at a crossroads. Fifth-year Head Coach Miles Smith knew he needed to change the team’s focus if he was going to be able to get something positive out of the season.

“We as a group really wanted to put our foot down on what we want to be for the remainder of the season,” he said. “If we’re losing, let’s lose the way that we teach like it, and if we’re gonna win, let’s win our way. We just put together three pillars that we always wanted to focus on which were discipline, execution and effort; we just rode that out for the remainder of the year.”

That change in mindset led their team to a win against NVU-Lyndon. This was a huge victory, as it put them on track towards a berth in the North Atlantic Conference (NAC) Tournament.

They were able to continue their success, winning key games against Husson University and Maine Maritime Academy that put them in spitting distance of the NAC Tournament.

With three games to go in their season, the men’s basketball team traveled to the University of Maine-Presque Isle for back-to-back games against the Owls and a chance to clinch a spot in the playoffs. The team wasn’t able to win either game, which gave NVU-Lyndon an opportunity to get back in the playoff race, as they won their back-to-back games against SUNY Canton, which resulted in a tie in conference records between Lyndon and Johnson.

The final playoff spot would then be decided in the last game of the regular season between the Badgers and the Hornets on the Johnson campus. Carter Gym was packed with faculty, staff, and students from both campuses to witness this historic matchup.

In the second half, the Badgers went back to controlling the pace of the game, and it led them to take the lead. Both teams traded baskets until the Badgers were able to pull away late in the game with key baskets from junior Robert Dubose, who ended up with 29 points, and key rebounds from freshman Floyd Davis, who ended up with 17 rebounds. With the win, the team officially clinched the final NAC Tournament spot.

As the sixth seed, the Badgers traveled to Husson University to take on the three seeded Eagles. The game was close throughout, with each team trading baskets until late in the second half when the Eagles were able to score big baskets to win the game 70-61.

Freshman Floyd Davis had himself an impressive first season for the Badgers, averaging over ten points, 8.5 rebounds, and 1.5 assists per game, which earned him NAC Rookie of the Year honors. Several players were able to step up as well, including Tyhee Taylor, Robert Dubose, Ayo Shokeye, Kiyl Mack, Zack Shedd and Jaymes Savage. With the team only losing one player to graduation this year, the core group should be able to build off the momentum created from this year’s campaign.

“If they get in the gym, work on their game, and get better, then I think next year will be a positive year for us,” Smith said. “If they don’t get in the gym and don’t get better, I think we’re starting back from square one. The guys played hard this year. They were coachable guys, but now it’s just learning how to win basketball games. If guys can buy in to wanting to win more, we will be more successful.”