Life as a DIII athlete is rewarding, exhausting 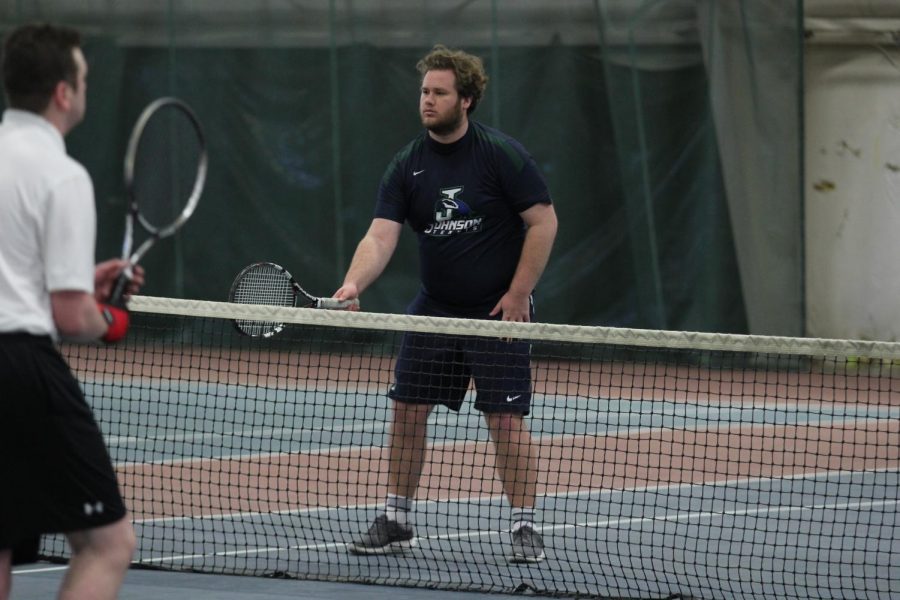 The author on the tennis court

Life as a Division III student-athlete is demanding. Athletics has become a large part of my college career, but it’s also been one of the most rewarding experiences of my life.

When I enrolled at NVU-Johnson, then Johnson State College, I wasn’t planning to play any sports at the varsity level. I was looking to have fun, discover my new freedom as a freshman, and obtain a college degree. Don’t get me wrong, I was still going to play sports, as I played intramural and pickup basketball almost daily my freshman year. But I had absolutely no plans to have anything to do with NCAA or DIII athletics.

Going into my sophomore year, I was feeling extremely lost. I felt on my own a lot in my journey through college, and even though I was working towards my bachelor’s degree, I had no clue what I wanted to do after college. Then one day, I saw an email from the men’s basketball coach looking for applicants for their video coordinator position. Looking for something to be involved in, I decided to apply. Long story short, I got the position, and I got the chance to grow and learn in the life of a DIII basketball program.

After the basketball season, I had the opportunity to play lacrosse for the first time ever in my life. The team was in the process of grabbing new players, and I had shown some interest in it, which led to me being their starting goalie for two seasons before the program got shut down. That same season, I was able to play in a couple tennis matches, as they needed players on occasion—I had played in high school and missed it. I played in a couple games as well the following year, and then in my senior year, I was a full-time member of the team until the COVID-19 pandemic put a screeching halt to the season.

DIII athletes rarely have a day off. Normal days can run 18 hours, barely leaving enough time to get sleep. Usually it requires waking up very early, in my case as early as 4:30 for a 6:00 practice, then running over to the cafeteria for a quick breakfast before heading to class. Throughout the day, they have numerous classes, have meetings with students, coaches, and professors on a numerous amount of topics. Then there’s strength and conditioning that would happen close to five days a week. Then, depending on if you had a morning practice or not, you can expect yourself to have a night practice after a long day of being in the classroom. On average, I never considered my day to be officially over until around ten at night.

Even with these long days, I still enjoyed many of them because of my teammates and coaches. They were some of the greatest people I have ever met, and I consider them family to this day. One of the most beautiful things about being a DIII athlete is the chance to meet new people from all different types of backgrounds, which allows you to grow as a human being. One of my coaches once said that the real championships aren’t necessarily the ones you win on the playing surface. They’re the relationships you build with your teammates for years and years to come. Even on the playing surface, it’s an exciting and welcoming feeling to have when you and your teammates all want to win together.

Being a DIII athlete also taught me a lot of lessons about life, including skills in hard work, focus, relationship building and organization. These lessons will carry on with me for years to come and I can’t thank enough the people who gave me the opportunity to participate in athletics. There is absolutely nothing like being an athlete, especially at the DIII level, and as I graduate this spring, I know there will be countless days of myself missing the memories I made during my time as an intercollegiate athlete.